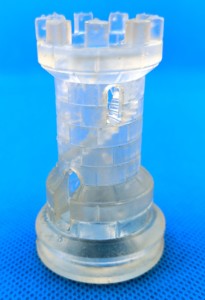 The next Euromold trade show in Frankfurt will be in a few weeks. While the show generally presents products related to moldmaking  and tooling, they also have a large section on 3D printing. This is a good time for me to talk about 3D printing and my last visit to Euromold last year.

3D printing is a up-and-coming technology that prints 3D parts in a printer as you would print a 2D sheet of paper. Hence the manufacturing goes directly from the computer to the completed part. This post discusses the different approaches in 3D printing and its possible impact from a lean manufacturing point of view. But before that, I have to get something personal off my chest.

Last year while driving around in Frankfurt, I saw an advertisement for the Euromold trade show. Since I am particularly curious about 3D printing, I decided to take a day off from work and visit the exhibition. To my surprise, my wife found this idea interesting too and decided to tag along. We had a good day at the 3D printing trade show, learned a lot about the latest techniques, and also managed to get hold of a few 3D samples to further  enrich my shelf of samples and gizmos.

I did notice, however, that my wife and I were the only people on the entire trade show floor walking around holding hands. Furthermore, my wife was frequently addressed as my assistant. The cliché was not helped by my wife being a very good-looking Asian woman. Overall, I thought we were getting quite a few strange, or even creepy looks. If any of you were at the 2012 Euromold trade show too, I just want to tell you, It’s okay, we’re married! We were just a geek couple on a date 🙂 .

Now that I got that off my chest, I can talk more about the actual 3D printing.

There are a couple different 3D printing technologies in use. With all of them, the part is built up in layers by a printer. These processes can generally be divided into additive processes (where material is added selectively), lamination (where layers are glued on top of each other), and solidifying processes (where an already-present material such as a powder or liquid is selectively solidified).

Overall, two different approaches are common. The first is adding material through a nozzle to build up the part. This is also called Fused Deposition Modeling or sometimes Extrusion Deposition. Basically, soft material (usually plastic, especially ABS, but sometimes also metal or even chocolate!) is squeezed out of a nozzle. As the nozzle moves over the workplate, layers of material are added, eventually building up a part.

The technology can use different colors by switching to different plastics, and it is probably the cheapest of all 3D printing techniques.

Multi-Jet Modeling is somewhat similar to Fused Deposition Modeling, except that there are many nozzles in one row. There can easily be two hundred or more nozzles in one row, which all pass over the product and add a new layer. You can compare this to inkjet printing where multiple jets also work in parallel. The process works with wax and plastics.

Yet another technique I have seen at Euromold is lamination. Here, standard A4 paper (or, alternatively, endless rolls of paper or plastic film) is used to build up the layers of the part. On a sheet of paper, glue is added selectively before another sheet of paper is pressed on the first. This sheet of paper is then cut along the edges of the final product, then in a rectangular pattern around the product to make it easier to get the part out later. Optionally, a color inkjet printer colors the cut edges to give the final product not only shape but also color. The resulting object feels almost like wood. However, I’m not sure how frequently this approach is used in industry.

Selective Laser Sintering (for metals also known as Direct Metal Laser Sintering) is probably the most significant 3D printing technique in industry. A thin layer of powder is selectively heated and solidified with a laser, then the next layer of powder is added to build up the part from layers. The major advantage of this approach is the wide range of materials that can be used. You can sinter metals including iron, aluminum, titanium, silver, gold, and platinum (jewelry, anyone?), ceramics, and a wide range of polymer powders.

The ability to produce parts from different materials makes this technique very suitable for industry use. For example,  if you need an injection nozzle, plastic will not be strong enough but titanium will be. Hence, this appears to be the most significant 3D printing technique used in industry.

A number of other techniques are also used in research and industry. These include:

Some Observations from Euromold

The technology of 3D printing is slowly maturing. Some of the product samples on Euromold clearly have an industry purpose, such as titanium injection nozzles with complex internal geometries, aluminum injection molds, and plastic air channels.

Nevertheless, the vast majority of samples came straight from Dungeons & Dragons, with exhibition booths crawling with elfs, dragons, storm troopers, and scantily clad but heavily armed female figurines. However, creepiest by far was a 1/3rd-size color model of the head of the dealer attending the booth, including hair loss, puffy cheeks, and all. He himself was average looking, but having a small-scale replica of him staring at you was just strange.

One approach that I also found interesting was a 3D sintering printer were the material was not added on a horizontal layer but on a 45-degree slope. This allowed the production of infinite parts where new layers were added on one side while the complete part emerged out of the metal powder on the other side (with appropriate support so it didn’t shift while the other end was being printed). Very interesting technology.

Another interesting bit was a 3D printed plastic part where the stiffness of the part varied throughout the product. One end of the complex plastic tube was quite flexible while the other end was stiff. This was not achieved through geometry like ribs or supports, but rather through a gradual change in material property as the part was printed. Cool!

The Future of 3D Printing

I believe that 3D printing will become more important in the future. Already, many parts used in industry are printed rather than manufactured the traditional way. The F/A-18 Hornet fighter jet already uses ninety parts that came out of a 3D printer. 3D printers can make internal geometries that would be difficult or impossible to produce in conventional ways (imagine, for example, a cork screw shape inside of a solid block of metal). Multiple parts can be printed in one go, already assembled. Peter Schmitt, PhD student from MIT managed to print an entire clock in one go, including all gears, chains, etc. in situ.

However, while some people have already announced the end of manufacturing, this is a long way off, if at all. 3D printing is still expensive and best used for small batches of parts. Making one part is a rather slow process, so for mass production there are often more applicable techniques available. Even so, more and more parts in industry are printed, and we have certainly not seen the end of it yet.

3D printing will also certainly help lean manufacturing. The advantage is the speed of production. Furthermore, since little manual labor is involved, there is no benefit of printing it in China and then shipping it to America or Europe. Hence, 3D  printing will increase flexibility in manufacturing. Spare parts may now simply be printed, rather than digging out 15-year-old tools and models just to build a single part. Already, 3D printing of plastic parts helps manufacturers cover hiccups in their regular supply chain. Overall, for small quantities of parts, the speed and flexibility of 3D printing will often more than offset the additional cost of the printing process.

For these reasons, I’m quite sure 3D printing will continue to spread as technology improves, speed goes up, and prices go down.