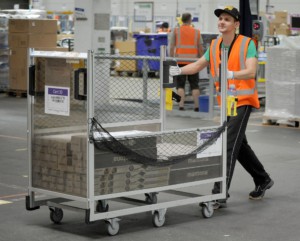 This is the sixth and last post on my series on the inner workings of the Amazon Fulfillment Center. Here I will look at some supporting processes as well as the all-important employee satisfaction. I will look at the process of taking inventory, security, their interesting office locations on the warehouse floor, Amazon Go stores, and Employee Satisfaction. 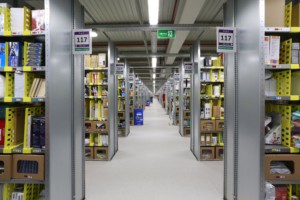 Like in any warehouse, there are occasional differences between the data and the reality. Sometimes extra items appear (maybe a packing error or an over-delivery by the supplier). More commonly, however, items disappear. This could be lost, damaged, under-delivered, sent to the customer in error, or even stolen.

Amazon has standardized processes on how to fix such issues. First of all, if something pops up, there are problem solvers who investigate the issue. If a shelf is so full that the person stowing can’t add the item, it is checked. If a item should be on the shelf but the picker can’t find it, it is also checked. This is a permanent ongoing process.

There is also the process of inventory taking, where people check the content of a shelf and compare it with the data (i.e., what is there and what should be there). In FRA 3 they claimed (anecdotally) that they find 1 error in a few dozen meters of shelf – which to me sounds too good to be true. But anyway, they have a perpetual inventory taking that is common for retail and similar inventories.

As is expected for a warehouse with lots of desirable goods, these warehouses need security. Going into the building requires a chip card through a security gate. Within the building, going into the actual warehouse is no problem, but going out has also some security. In FRA3 in Germany, these were simple RFID scanners similar to a shopping mall, and they do not do body scans or check pockets of their workers. In SAT2 in Texas, it was closer to an airport security with body scans and x-rays of luggage. This is aimed to reduce theft, although it is unable to completely prevent it.

I order through Amazon frequently, and recently I had the first case of what I suspect to be theft. I ordered a nice new laptop, but when the box arrived it contained only chopped straw for the bedding of small pets. The box was still sealed with the original packaging tape and did not appear to have been tampered with. The two bags of bedding weighted 2kg, which was approximately the weight of the laptop, hence the double-checking during the SLAM step did not notice anything. This may be either a very weird packaging error or some employee figured out how to get a free laptop. Due to the price tag, the service agent from Amazon needed to escalate my issue to its supervisor, but they sent me a replacement without much hassle (cheers to the Amazon Support Desk!). They did, however, start an internal investigation to figure out what happened to the laptop, and my sense of justice hopes that they catch the perpetrator.

One thing I liked was how Amazon integrated the offices with the shop floor. In all locations I visited, and on some photos like MAD4 below, most offices were not separate rooms, but simply tables and computers put in a corner of the warehouse. No dividers, no walls, no doors, completely accessible. 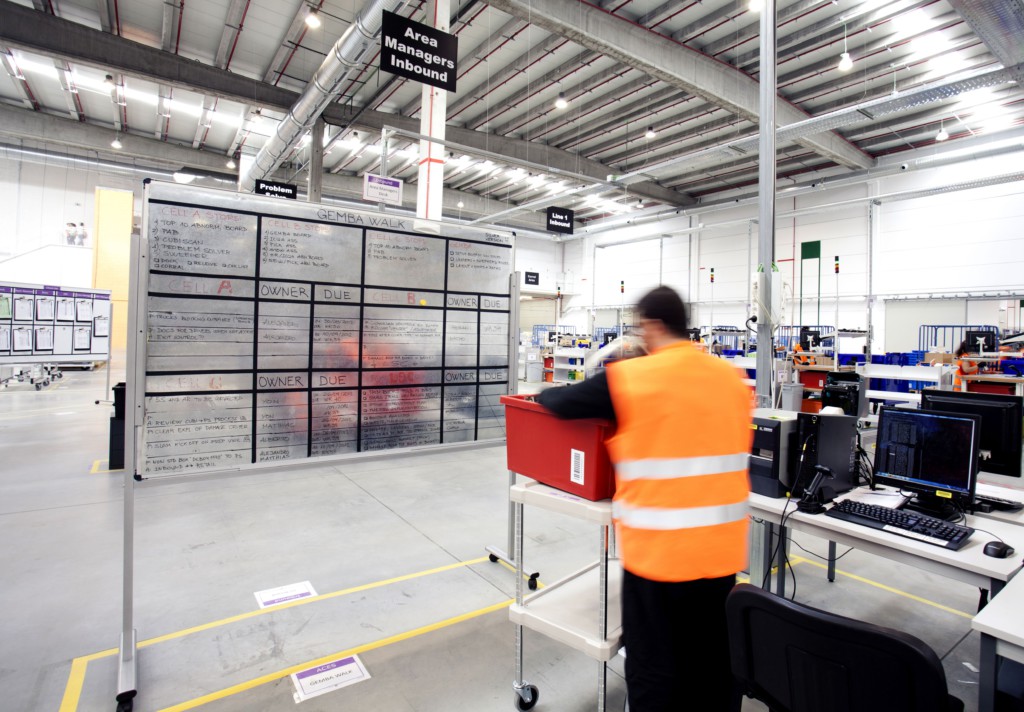 For example, HR at Amazon Fulfillment often has a desk at the main entrance. Every employee coming in or going out walks past the HR desk, without any separating doors or walls. If the employee needs or wants to interact with HR, then they are right there and can (hopefully) help the employee.

Similarly, problem solvers, quality people, team corners, and improvement teams are right where they should be – on the warehouse floor (or in lean terms, the genba). If you look closely at the image above, you will see a gemba walk board that also has a list of problems for different pick towers, a responsible, and a due date … and it is all hand written! I quite like that approach.

Like all open offices, and especially offices on a shop or warehouse floor, there is the issue of noise. This is a downside of such open offices, but maybe they work with noise-canceling headphones, which become more common in open offices. 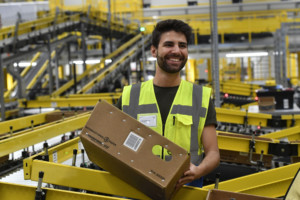 Finally, I would like to talk about employee satisfaction. Amazon got some critical press lately, including a video on Last Week Tonight by John Oliver, lamenting the difficult conditions in the warehouses, pressure to perform, and difficulties of accessing toilets.

Personally, however, I did not notice such problems. Granted, working in a warehouse is tough and repetitive work, and the pay could always be better. However, I don’t think conditions are worse at Amazon than than at let’s say Wal-Mart or other warehouses. Observing the people working during my tour, I did not notice any glum or worn-out people. My tour guides were quite cheerful and appeared happy with their jobs at both locations. The working pace also seems to be acceptable.  All centers I visited were air-conditioned, and the guide in SAT2 noted that the Wal-Mart warehouse nearby is not. But then, I have never worked at Amazon, and my observations are only casual. At both locations they claimed that they have toilets within the warehouse that can be accessed without a security check. 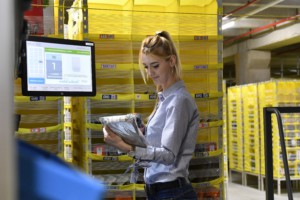 A brief glance at company review sites like Glassdoor or Kununu showed reasonably good reviews with 3.8 and 3.66 stars out of 5 respectively. While this does not put Amazon in the top 100, it is in my view a good rating. Of course it is a mix of warehouse workers and white-collar workers, the latter of which are often more satisfied than blue collar workers, but this is also true for other companies. For comparison, at the time of this writing, Wal-Mart had 3.2 stars on Glassdoor, FedEx 3.7, UPS 3.4, United States Postal Service 3.0, Union Pacific 2.2, and DHL 3.7, to pick just a few logistic companies. Overall, I believe the negative press on the working conditions is exaggerated. 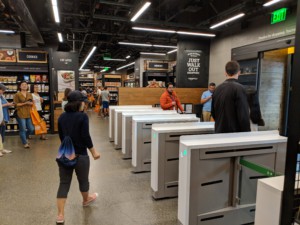 While talking about fancy new things, I would also briefly like to mention Amazon Go. The largest online retailer Amazon goes brick-and-mortar. Amazon Go is a chain of convenience stores with 17 locations in the USA. The first one opened 2017, although only for Amazon employees as a beta-test. The general public can enter such stores since 2018 if they have the Amazon Go app installed.

This store is – sort of – the retail version of a fulfillment warehouse, and stuffed with all kinds of sensors, computers, and artificial intelligence. The goal is to automate a retail purchase as much as possible. The customer merely picks up whatever he wants and takes it with him. In a normal store this would be outrigger theft, but at Amazon Go, cameras monitor the customers, shelves measure their weight, RFID chips detect items, etc. If a customer takes an item off the shelf, the store detects this and adds the item to the Amazon Go app shopping cart. If the customer puts it back, the item is removed from the shopping cart. When the customer leaves the store, the items in the shopping cart are paid for automatically through the app.

The concept is quite revolutionary, and can cut down retail labor cost even more, as well as losses due to theft. According to some news, Amazon plans to open thousands of stores within the next few years. 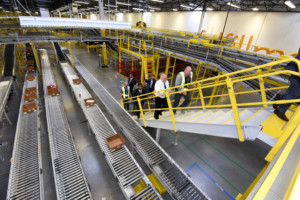 If you would like to also see an Amazon Fulfillment Center, many of them offer tours. On their website you can book tours in different centers. Similar tours are also available in other countries (e.g. Germany). I thoroughly enjoyed the tours and the insights I got in a well-organized operation. Now, go out, get your goodies to the customer, and organize your industry!