The Arsenal of Venice was one of the the largest industrial sites in Europe in the 16th century. This was the hub of Venetian ship building, supporting the power of the Venetian republic. Both warships and merchant vessels were built there.

It is also known for the organization of its work. Sometimes it is listed as the world’s first assembly line, although in my view this may be a bit of a stretch. While they achieved a lot, there was also a lot of chaos. In this post I present you with a bit about the Arsenal in general, as well as some detailed maps by Abbot Maffioletti from 1797 and 1798. In my next post I will go into much more detail on the material flow based on these maps.

The Significance of the Arsenal

The Arsenal was the machine that powered the Venetian commercial and military fleet. Initially established around 1104, it reached its peak during the 16th century. It employed up to 16,000 workers at the same time. In preparation for the Ottoman–Venetian War, the Arsenal was able to outfit and launch 100 ships within two months, an astounding feat compared to all other Arsenals in Europe. In 1574, King Henry of France watched the outfitting of an entire ship during his lunch.

Venice did change their shipbuilding technology. While Roman shipbuilders first created the hull and then added the frame for strength, the Venetians did it the other way round, building ships faster while using less wood at the same time.

Probably most significant was that after the hull was completed, the hull was brought to the work rather than the other way round. They managed to change shipbuilding from a project shop to a flow shop, significantly improving efficiency. The hull was towed to different stations to be equipped with masts, cabins, rudders, sails, weapons, and so on. I will go into detail on this in my next post.

As part of this flow shop, they used proto-standardized parts. Most of the wood for benches, masts, and so on was already cut close to the final size, and required only minor adjustments during installation.

Quality was also tracked. For example, the rope makers added colored strands to the ropes. Each rope maker had its own combinations of colors, and if the rope broke on a ship, they were able to trace the issue back to the maker of the rope.

However, they did not yet have a good organization of the work. Modern management structures were not yet known, and the entire arsenal constantly faced challenges in dealing with its workers. While for its time it was groundbreaking and highly advanced, from our modern point of view it was a mess.

Becoming a worker at the Arsenal, an Arsenalotti, meant lifetime employment. Since wages were paid simply for showing up once per day, many Arsenalotti did just that. Even the old, infirmed, or sick dragged themselves across the gate once per day to get paid. Able-bodied workers preferred to spend most of their time idling and chatting, working outside the arsenal for private profit, or even working inside the arsenal for private profit – often using material and tools provided by the arsenal.

Lots of material was also stolen. Despite attempts by the officials to establish a police force, the material and the equipment of the Arsenal often found its way outside into private hands.

Officials also tried to improve attendance, such as by offering benefits like additional pay and free wine. For example, in 1630 they consumed the equivalent of two liters of wine per worker per day! They also required attendance and tried to punish stealing. However, as most of these rules were not enforced strictly, the Arsenal remained a bit of a chaotic work environment.

The End of the Arsenal

The Arsenal supported the naval power of Venice. As the Venetian Republic declined, so did the Arsenal. With the fall of Venice to Napoleon in 1797, the Republic ended, as did the production in the Arsenal. Nowadays the Arsenal is used as a training location for the Italian Navy, and annually for the Venice Biennale.

The Beautiful Maps by Abbot Maffioletti

Abbot Gian Maria Maffioletti created a series of three maps of the Arsenal of Venice right around the fall of the Venetian Republic, although in all likelihood he did not draw them himself but arranged for the creation of the maps. One map shows the arsenal in 1797, the other one in 1798, and the third one shortly thereafter, labeled “After Napoleon.” All maps can be found in the Museo Storico Navale in Venice, which was once part of the Arsenal.

The map of 1797 is probably the most interesting from a manufacturing point of view. It shows in great details the inner workings of the Arsenal of Venice. The roofs of most buildings are not shown, so you can see inside the building. Back then, such maps were also a simple approach to get an overview of the inventory. Hence, pretty much all buildings and areas are labeled, with a detailed legend for each entry (e.g., 33 Warehouse of softwoods and hickories or 173 Blacksmiths’ workhouse for artillery).

I encourage you to look at the map in greater detail and “wander around” in the Arsenal of 1797. Here is the link to the 12 MB full size with a resolution of a whopping 8388 x 6020 pixel. Please note that the map is stitched together from multiple individual images, hence there are a few stitching errors where the lines do not align. The map is in public domain due to its age, although I would love to get credit for the stitching of the images. The map is also enhanced for color; if you prefer the original, you can find the original color 8388 x 6020 23MB file here.

I also had the legend translated from late medieval Italian to English and German. The Excel file with the original Italian, English translation, and German translation for the three maps is available here, under the Creative Commons Attribution-Share Alike 4.0 license.

A second map shows the Arsenal in 1798. This one has no ships, and the roofs of all buildings are shown. Overall, it is much less detailed than the 1797 map. 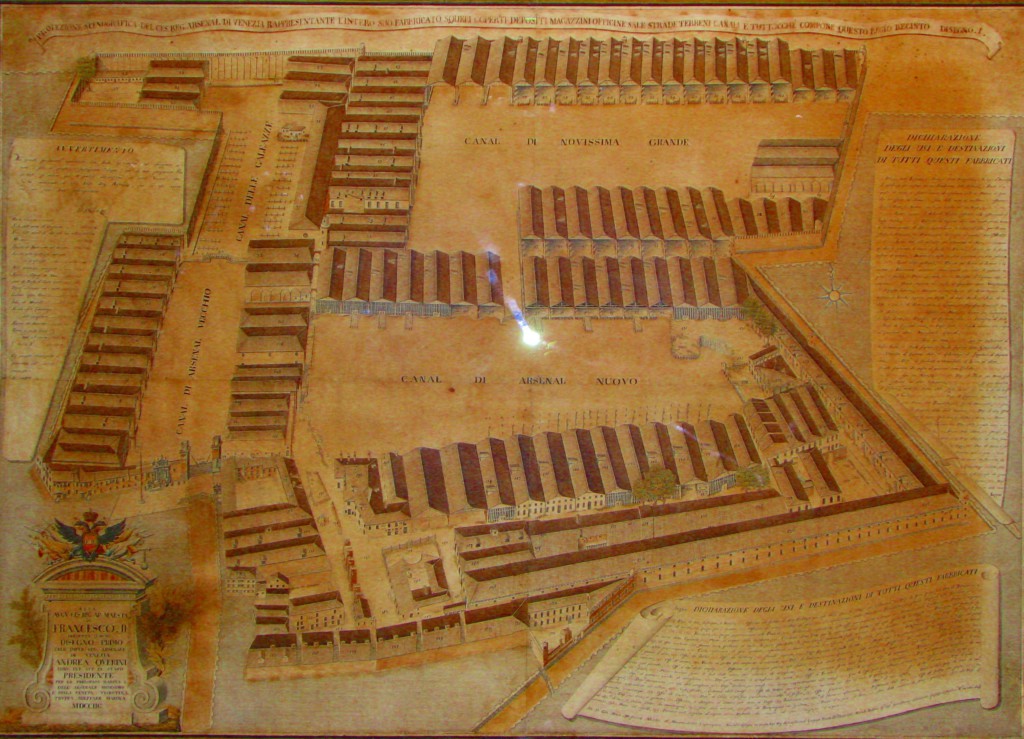 Arsenal of Venice “After Napoleon”

The final map of this series shows the state of the Arsenal after the sacking by the French. Most of the ships are gone, “removed or sunk.” The arsenal shows damage in many locations, although it is unclear how much artistic liberty was applied here. 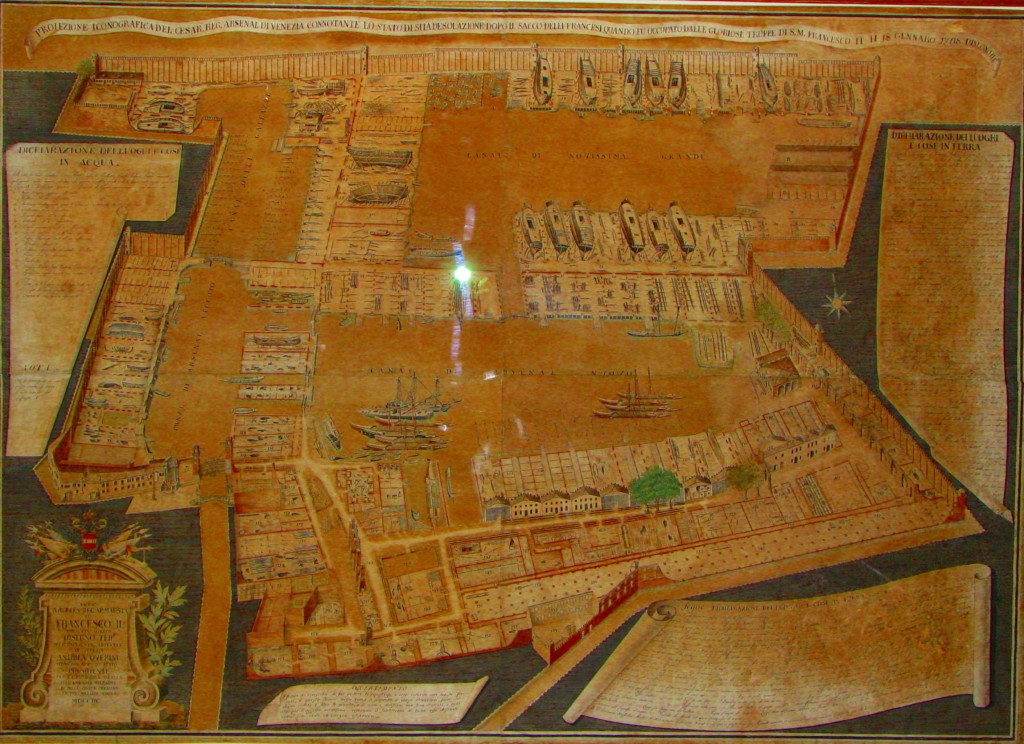 I hope this brief introduction to the Arsenal of Venice was of interest to you. In my next post I will go into much more detail on the material flow. Until then, stay posted, and go out and organize your industry!

If you are interested in more manufacturing history, check out my book “Faster, Better, Cheaper” in the History of Manufacturing, which of course also includes a chapter on the Arsenal in Venice:

4 thoughts on “The Arsenal of Venice”