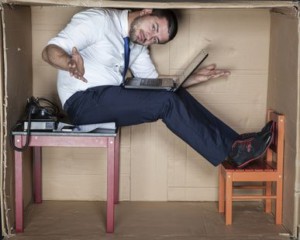 Assembly needs lots of parts. Especially if you have larger parts, you may find that you are running out of space to put them. Fear not, there are a number of things that you can do to solve this problem. This post will present you with all the solutions (that I know) to remedy a space shortage in assembly.

Space around the assembly location is most precious. The closer you can put your stations together, the more efficient they will be (up to a limit, of course). A lack of space usually stems from too much material around the station. In this short series I will present you twelve ways to reduce space around your assembly. I would like to split the following remedies into two (related) groups, differentiating if you have too much material overall or if you need more front space for the operator. Remedies for the latter often improve overall floor space usage as well. Surely there must be one solution that helps you with your space problem.

For an initial situation, assume you have an assembly location as part of a larger assembly line as shown below. The station needs quite a bit of material , putting it quite a bit apart from the adjacent stations and maybe even causing space problems elsewhere (in the image, illustrated by a milk run that cannot pass due to the pile of material). 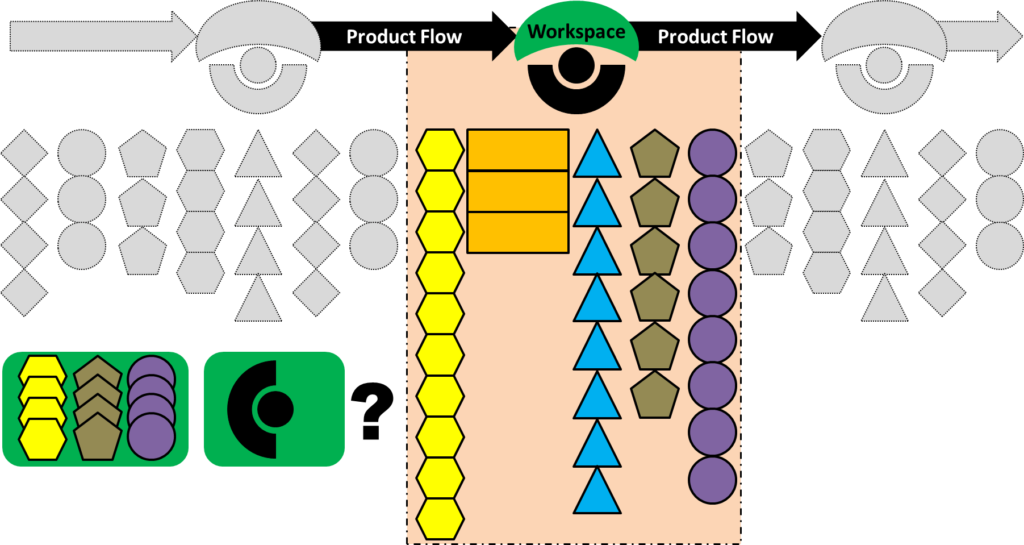 The first solution is quite simple. If there is not enough space for the material at the station, move the stations farther apart as shown in the image below.  Of course, this does not reduce the overall quantity of material, nor reduce overall use of space. It also puts the assembly stations even farther apart, making the material and information flow between the stations trickier. You simply exchange space in the back of the assembly station for space to the sides of the assembly station. Yet, the space to the sides of the station is usually more valuable than the space in the back. Therefore, this is usually not a good solution, but may help you in a pinch.

Another option is to move material to another space where it is not in the way, as shown below. Yet this is also a less desirable solution because now the worker has to walk to get the material. Even if you put the least frequently used material elsewhere (which you should do), the worker will have additional walking distance and hence additional waste.

This additional work may even be outside of his normal cycle if he has to do it only for some products but not for others. In general, we try to split the work into cyclic work (happens for every product) and noncyclic work (happens occasionally). A worker should be doing either one or the other, but ideally not both.

This additional delay due to walking may also cause problems for the entire line if the worker now has more work than the line takt allows and other workers have to wait for the worker to complete his tasks. Hence, this is also not an ideal solution, as it does not reduce the material. But as the previous idea, it may help you in a pinch. 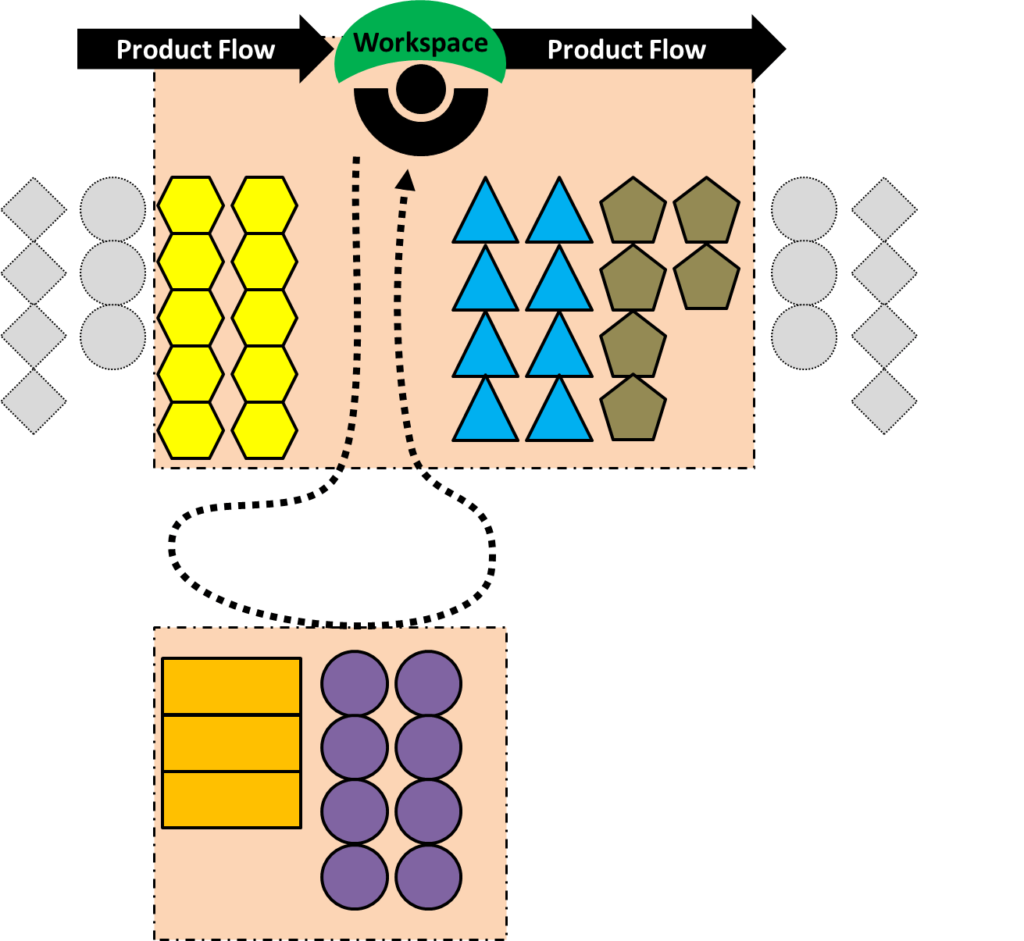 A point-of-use provider is a worker who does mostly the material support for other workers. It is noncyclic (hence not a milk run) and for short distances only (hence not a forklift). In practice, it is usually one worker assigned to an assembly cell that makes sure all of his assembly cell teammates have all the material they need. This is illustrated in the image below for a point-of-use provider supplying one worker, but in reality he would of course be supplying multiple workers. 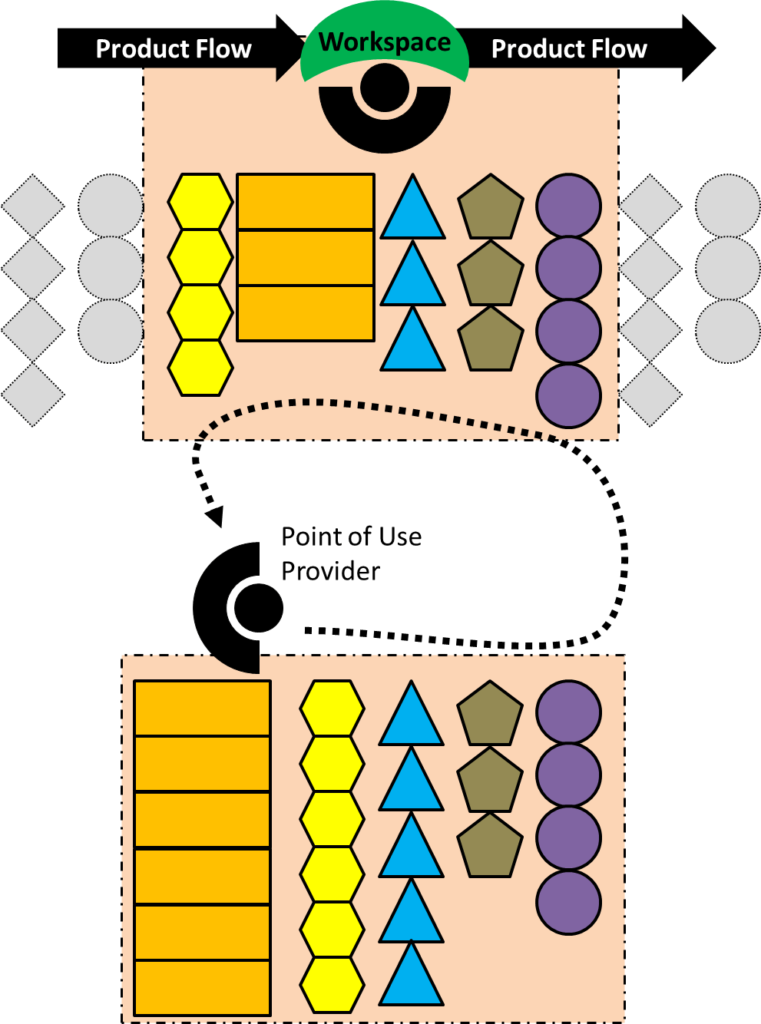 Usually, the point-of-use provider receives his material from an intermediate supermarket (often supplied from the central warehouse through a milk run) and distributes this as needed along the assembly cell. He is in close contact with his assembly cell teammates and part of their team. It is often a more experienced team supervisor that not only supplies materials but also helps in case of problems and other issues. He can also stand in for a worker if the worker needs to go to the toilet to keep the line running smoothly.

I have seen point-of-use providers used very effectively for many assembly cells and believe that this is a good way to take pressure off an assembly cell. Of course, you would need an extra worker, but the resulting gain in efficiency is often worth it. 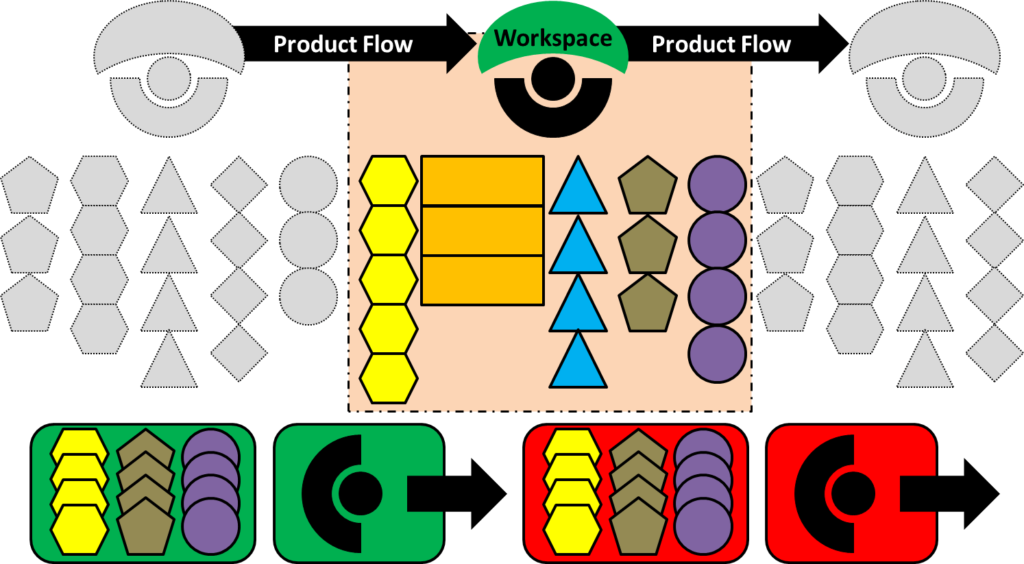 Increasing delivery frequency not only rearranges the material around your workplace, but actually reduces the overall material quantity and hence the required space. You don’t even merely push the material back to the central warehouse, but instead slightly reduce the quantity of material there too. Rather than keeping ten parts in the warehouse available for the hourly milk run, you need to have only five parts for the twice-hourly milk run. But this probably pales compared to the 1,680 parts you have sitting around due to the weekly truck from your supplier.

Overall, you buy your reduced material quantity on site with an increased delivery schedule, and a potentially slightly increased overall delivery workload. The work for delivering material won’t be twice as much since every milk run now has only half the material, but it is an increase in work content. Yet often this is worth it. One vision in lean is, after all, a one-piece flow, and increasing delivery frequencies moves in that direction. For a nice example of one-piece flow in material supply for assembly, see my post Toyota’s and Denso’s Relentless Quest for Lot Size One! 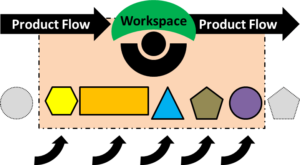 This increase in delivery frequency can be pushed even one step further: Deliver Just in Time (JIT)! Bring the material from the central warehouse exactly when the worker needs it. This way you have (almost) no material at the actual work location.

Of course, this is easier said than done, as Just in Time is not easy. You would, among other things, have to reduce fluctuations in your value stream. Generally speaking, reducing fluctuations reduces your required buffer inventories, and hence you need for space around your workstation.