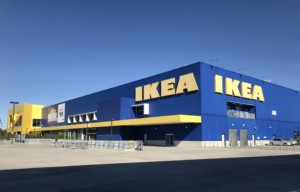 In my last post I went a bit into the theory of where drones in manufacturing may be applicable. They are not really for transport, but there is a possibility to use drones to gather data – provided you don’t need an expensive pilot and there are preferably no workers around on which a drone could crash. In this post I would like to show you the use of drones at IKEA. This is pretty much the only case I know that is not a mere trial, test, showcase, or example, but an actual beneficial implementation that receives a wide roll-out, with dozens of warehouses and stores either already having drones or planned to receive drones soon. Many thanks to Omid Maghazei for the information and details, see source below. 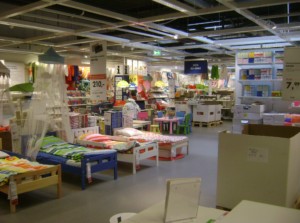 IKEA is the world’s largest furniture retailer. Their (as of 2022) 461 stores and over 80 warehouses are found all over the world. Their concept of assemble-it-yourself flat packages allows them to keep costs down, making them popular (not only) for people with a limited budget. My home also has a lot of IKEA stuff in it. You probably have been in an IKEA store yourself. 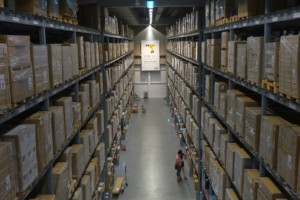 While of course the best way with data discrepancies is to not have any, in reality you always do. The second best way is to take an inventory. If done by humans, this is quite an effort. People have to go through all items and verify what is where. I have taken inventory myself, and the plant pretty much shut down for three days while everybody was going though the inventory. Alternatively, there are also possibilities using RFID chips, where an antenna can automate the taking of inventory.

A typical IKEA store has around 7000 shelf locations, with distribution centers having ten times more. Despite efforts to improve data quality, the accuracy was not satisfactory. A distribution center had ten full-time employees doing nothing else but searching for lost pallets.

So far IKEA used manual running inventory taking, mostly before the store opened and after the store closed. This is a highly repetitive and tedious work, with employees lifting a pallet down, counting and verifying the content, and lifting it back up. Repeat this 7000 times for a store and 70 000 times for a warehouse.

How Drones Started at IKEA

One of the first use of drones at IKEA was almost unnoticed by IKEA themselves. An employee in Bangkok, Thailand, simply bought a drone and took pictures of the inventory, instead of moving inventory down or himself up. Another trial was in 2018 in Hungary, and yet another in 2019 in Germany.

IKEA started to centrally organize its experiments with drones in 2019. Working with different drone companies (Verity, whose founder is also one of the founders of Amazon robotics, and EYESEE by Darwin Drones), they created a pilot project. Starting in Switzerland, together with Verity they developed this drone-based inventory management system.  This was successful, and the pilot was expanded to one warehouse in 2020. As of December 2021, five warehouses and one distribution center in Sweden, Italy, Germany, and Switzerland use this drone technology to verify their inventory.

This is not much yet, with IKEA having 461 stores worldwide, but it is just the start. In 2021, a handful more warehouses were set up with inventory-taking drones, and for 2022 a whopping 30 additional implementations are planned. For me, such a large roll-out is a good indication that this implementation is not only for show and tell, but actually beneficial. It surely helped that they tried out many different products before settling down on Verity and EYESEE.

How to Use Drones

The drone solution by Verity is fully autonomous, and does not need a human pilot. All you need to do is press a button to start the drone. It also returns by itself to its charging station. A store with 7000 pallets needs around eight drones to scan all locations during a single day (Sunday when the store is closed). On other days, the drones fly only after hours at night, and check only locations where the data indicated a material movement. After the flights any data discrepancy is corrected either manually or digitally. It seems algorithms can help a lot in finding discrepancies. Altogether this gives IKEA locations with Verity drones a close to 100% data accuracy every day. While not quite a “zero error warehouse,” as claimed by Verity, it is pretty darn good! The eight Verity drones are set up in two beehives (charging stations) of four drones each.

The EYESEE drone by Darwin Drones, on the other hand, is only semi-autonomous. It can count only a single aisle at a time, and a markers have to be set up manually beforehand to create virtual boundaries for the drone. This is usually done in the morning. The warehouses where this system was tested had only a single drone, and it did not check the entire inventory. IKEA claims that this works for central warehouses where inventory needs to be checked less frequently. While Verity is fully autonomous, I do not know the cost of the autonomous system to make this happen. In any case, IKEA is proceeding with both Verity and EYESEE.

I do not have hard data on the cost and benefit from IKEA. It is also hard to compare to manual inventory taking, as this was also sometimes flawed, and also less frequently than inventory taking by drone. As is so often in lean, the cost may be easy to measure, but the benefit is hard to determine by cost accounting. What is the benefit of having more accurate data? Surely there is one, but how do you measure this in Euro and dollar?

The lack of hard financials notwithstanding, IKEA is rolling out the use of drones to dozens of warehouses and stores. IKEA management believes that these drones are actually beneficial for the bottom line, even though the benefit is hard to measure. Verity claims that the return on investment is less than one year across all central European and US sites. IKEA is currently using eleven Verity systems in five countries that automatically perform 300,000 inventory checks per month.

The employee reaction was also positive. Taking inventory is considered an unpleasant and potentially dangerous task, and the employees were happy to have this automated. It is also important that there were no employees made redundant. IKEA used the freed-up manpower to improve inventory taking in areas that are less suited to drones. Noise and wind from the drones were not a problem, especially at night when there was not even an employee present.

So, overall, finally a use of drones for internal logistics that actually seems to work and create a benefit beyond flashy PR. Now, go out, fly your company into the future, and Organize your Industry!

During my sabbatical at the ETH in Zürich in the summer of 2022 with Torbjørn Netland, I had the pleasure of working with his postdoc and drone-in-manufacturing expert Omid Maghazei, who taught me a lot on drones. Many thanks, Torbjørn and Omid! See also their paper below, from which much of the information in this blog post originates.

Here are also again the links to Verity and EYESEE by Darwin Drones. There is also an article by IKEA themselves, but this has much less information than the paper by Omid above. There is also a video of the Verity drone at IKEA in action. A similar inventory taking drone inventAIRy XL is also offered by doks.innovation. They also have a highly unusual combination of a wired (!) drone connected to an AGV, allowing for 5 hours of uninterrupted (but tethered) flying.

7 thoughts on “How IKEA Uses Drones for Inventory Management”