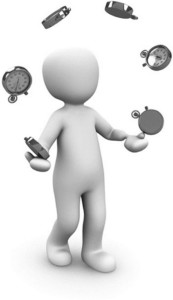 Prioritizing one part over others is an easy way to speed up the production of the prioritized part. However, if too many parts are prioritized, the performance of the others will suffer.

My general recommendation is to prioritize no more than 30% of your production volume. In this post I will look in more detail at this relation and verify this assumption (TL;DR: this is correct!). This post is based on a masters thesis by my student Yannic Jäger. 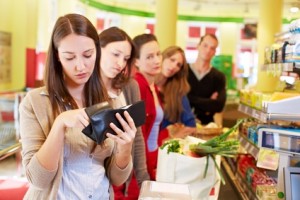 Imagine you are waiting at a supermarket checkout. Based on the number of people in front of you, you can make a reasonable guess on when it will be your turn. However, if another customer would have a gold member VIP card, he could cut in line and be the next person that is served. If there is only one VIP member cutting in in front of you, your initial estimate would still be reasonably good. However, the more VIP members there are, the longer the poor and unimportant Non-VIP customer have to wait. In this post I will show you these relations in more detail.

In my previous blog posts I have written extensively on how to prioritize, and how NOT to prioritize, production (or other) systems. Back then I recommended not prioritizing more than 20%–30% of the parts. The detailed data below will confirm this estimate.

To simulate the system, we used a simple one-process system. By adjusting the random arrival time and the random service time, we tested different utilizations between 75% (low utilization) to 95% (very busy system). We did not test 100%, because this would cause an infinite queue. The system processed two types of parts, simply called A and B. Both parts had the same randomly distributed processing time. For simplicity’s sake, we had a lot size of one and no set up times, breakdowns, or other disturbances.

As a baseline, we simulated the system with only one part, and with two parts without any prioritization. All parts were processed on a first-come-first-served basis. It makes no difference if you have only one part or if you have two parts without any prioritization, the system behaves identical. The only factors influencing the average waiting time are the relation between the total arrival rate and the total departure rate, which create different utilizations. 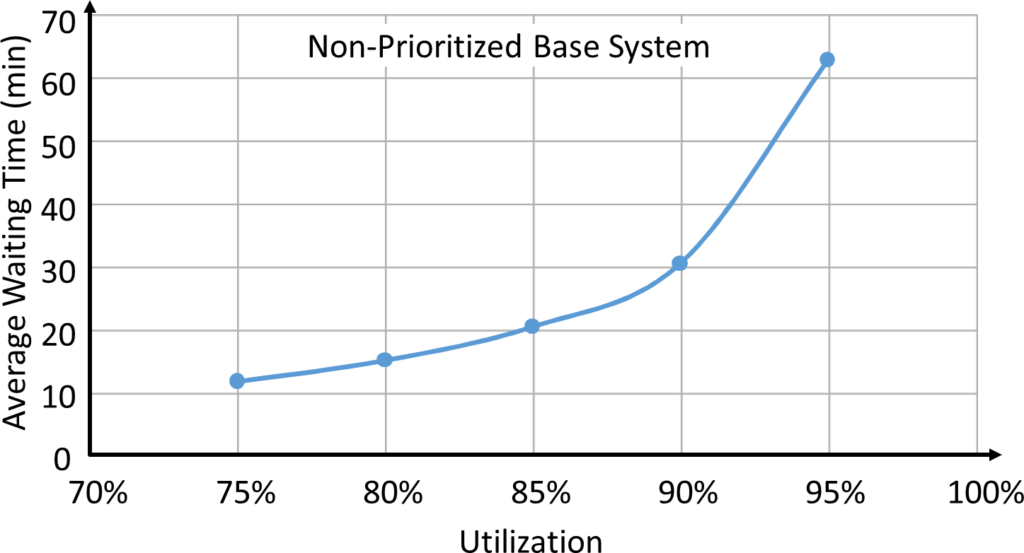 Of course, we want to know the effect of prioritization. Hence, we now prioritize our parts. Parts of type A and B are waiting in separate queues. If there is one or more part A waiting, it always takes priority over any part B. Within the A queue and the B queue, we maintain FIFO respectively, although this would not influence our results.

Below are the results for different percentages of prioritized parts A and different utilizations. You can also see the baseline of a non-prioritized system of similar utilization and overall arrivals and departures. This baseline would also be the weighted average of the average waiting time of A and B together. 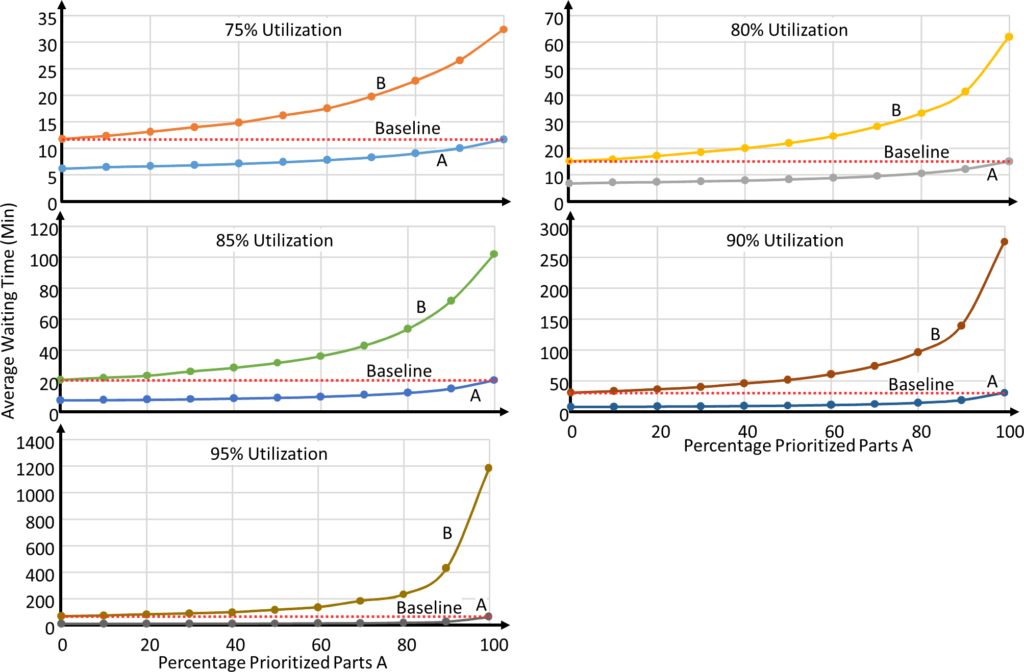 The baseline always goes through the waiting time of 0.01% A parts (i.e., 99.9% B parts) and 99.9% A parts, as these are effectively only-B and only-A parts, and should behave like the unprioritized system.

Looking at the graphs above, you can see that having a few prioritized A parts will be beneficial for the A parts, without much drawback for the B parts. For example, up to 30% A parts, the A parts will pass through the system much faster, but slowing down the B parts only marginally.

However, as you increase the percentage of prioritized parts, the benefit will be less and less, until there is no longer any benefit to the A parts. But at the same time, there is a huge disadvantage and punishment for the B parts. If you prioritize, for example, 90% of the A parts, they behave very similar to the baseline system. However, the B parts are punished harshly.

The effects can be seen very clearly in the graphs below, shown for different utilizations. The waiting time of the prioritized part A can be reduced to 13%–50% of the original system depending on the utilization. However, as you prioritize more parts, the effect becomes less and less, although even 70% prioritized A parts is still a significant improvement over the average.

The real kicker and the reason why I recommend not prioritizing more than 30% of your parts is the behavior of the B parts. This is shown below for different utilizations. If only a few A parts are prioritized, the waiting time of the B parts is increased only slightly. For example, with 30% A parts prioritized, the waiting time of B increases 20%–30%. Not ideal, but manageable.

Coefficient of Variation of the Waiting Time

Interesting is that with increasing prioritization, the coefficient of variation goes up. This means that the standard deviation is increasing more than the mean! From the point of view of the production planner, this is a very bad thing. A good production planner can handle longer lead times by including this in his planning schedule. However, if the standard deviation increases faster than the mean, it becomes more difficult to plan. The parts may be finished much earlier than planned, or much later than planned.

This means that being prepared for a frequent excessive delay over the average, you need to put the material in stock (if it is made-to-stock), or promise a much later delivery time (if it is made-to-order), or otherwise apologize profusely to the customer and feel the wrath of your boss because the delivery performance suffers (for both MTO and MTS)

In sum, not only does your waiting time increase, but the fluctuations increase even more, resulting in stock increases, late deliveries, low delivery performance, and unhappy bosses and customers.

Overall, it remains important to not prioritize too many parts. While the intent of accelerating the important parts is understandable, the benefit decreases with increasing prioritization. At the same time, the “unimportant” parts get more and more punished, and their waiting time increases exponentially. At one point these “unimportant” parts will become important again due to their very long lead times. Now, everything is important (and your boss doesn’t want to hear that this also means that nothing is really important). The production planner feels like he is getting an endless stream of hot potatoes that are needed right away, while the system does not have the capacity. At the same time, the planability goes down as the fluctuations increase!

Therefore, folks, please do not prioritize more than 30% of your production! This maintains a benefit for the prioritized parts, without damaging the not-so-important parts, while keeping fluctuations manageable (or at least not much worse than the initial system.  Now, go out, prioritize smartly, and organize your industry!

2 thoughts on “Effect of Prioritization on Waiting Times”