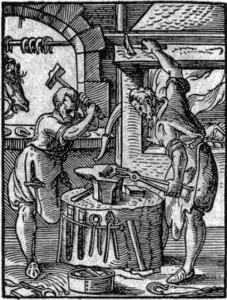 Most of our prosperity and wealth is based on our ability to manufacture faster, better, and cheaper than ever before. To announce the publication of my first book “Faster, Better, Cheaper” in the History of Manufacturing: From the Stone Age to Lean Manufacturing and Beyond here is the second of a four post series where  I would like to explore this story and tell you a brief version of the History of Manufacturing. In this second post I would like to explore how the middle ages prepared the industrial revolution and the appearance of the steam engine.

Advancement during The Middle Ages

Here I have a political map of central Europe around 1400. You can see a small black arrow in the middle; that is where we are [the lecture was held in Karlsruhe, Southern Germany], in the margravate Baden-Baden. We are surrounded by such distinguished and well-known lands like the Bishopric of Speyer, the Electoral Palatinate, the Countship of Württemberg, the Countship of Hohenberg, Bishopric of Strasbourg, the Countship of Hanau, and the House of Fleckenstein. As for Fleckenstein, the name already says it all; they are nothing other than a spot on the map [German Flecken for stain or blotch]

That means that the Middle Ages were the heyday of craftsmanship. An artisan was now somebody important. They were invited to parties. They also had good chances on the marriage market. As an artisan, they now had respect and were esteemed.

Lombe knew that there was already a similar machine in Italy. They had mechanized silk looms, though only on a small scale. Naturally, Lombe was interested. He learned Italian and traveled to Livorno, Italy. He bribed a priest in order to get a job in a factory, and then bribed the foreman so he could also work nights. During the day he worked in the factory, and at night he made drawings of the construction. This was classic industrial espionage.

That was not exactly the safest thing to do at the time. Italy wanted to protect its intellectual property. As was common at the time, such crimes were punished by death. Mr. Lombe’s espionage was discovered, but he still made it on an English ship. The ship was just fast enough to escape an Italian warship. Eventually, both the drawings and Mr. Lombe arrived safely in England.

In hindsight, he would not have had to go through all that trouble. Someone already had published a book one hundred years earlier with quite detailed drawings of these machines, as seen in the picture on the right. The book was also available in the Oxford University Library, and Mr. Lombe could have checked it out there at anytime. Anyway, the knowledge and technology had successfully arrived in England. Naturally, Mr. Lombe then had “his” invention patented.

That did not sit well with the Italians. Shortly thereafter, a beautiful Italian woman showed up in England, became an employee of Mr. Lombe, and befriended him after that. Soon thereafter, Mr. Lombe died very young, very painfully, and under mysterious circumstances.

Public opinion knew immediately what happened: “The Italian witch poisoned him!” Luckily for the Italian woman, the English justice system was already quite advanced, using the presumption of innocence, “innocent until proven guilty.” Since the court could not prove anything, they acquitted her. The woman then returned speedily to Italy.

Lombe’s brother took over the company. Unfortunately, after a year, he was also dead. However, in this case the Italians could not be blamed, since Lombe’s brother shot himself in the head.

The technology was in England. However, silk back then was a luxury good just as it is today. The volume market was cotton. Yet cotton has much shorter fibers, and therefore is more difficult to spin.

The first to improve the technology to spin cotton was Mr. Richard Arkwright, later knighted Sir Richard Arkwright. He took over Mr. Lombe’s invention, improved it, and of course patented his improvement. He built the first water-powered cotton spinning mill, Cromford Mill, near Birmingham.

It was a smashing success. Arkwright became immensely rich. His son was the richest man in England. In a very short time, he had five other mills built, and a number of friends, acquaintances, relatives, and pretty much everyone who had money at the time followed his example. Within a few years there were about twenty mills built throughout the valley. Similar to today’s Silicon Valley in America, this was – so to speak – the Cotton Valley.

The English also wanted to protect “their“ intellectual property. Hence, as was common at the time, the export of machines, drawings, or skilled workers were forbidden, under penalty of death.

However, that did not stop everyone. For example, there was a Mr. Samuel Slater, who was a colleague of Mr. Arkwright. He was not just anybody; he was one of the engineers, and he knew the machines well.

Slater, against the law and under a false name, went to America. There he found a partner and built the first American spinning mill. Hence, Slater is revered as one of the fathers of the Industrial Revolution in America. The English, on the other hand, have another nickname for him: Slater the Traitor. From whichever perspective you look at him, he is either a hero or a traitor. In any case, the technology was in America.

Germany jumped on the bandwagon too. Mr. Johann Gottfried Brügelmann also wanted to start cotton spinning. History repeats itself. He went to England, got a job at Arkwright’s Cromford Mill, worked there during the day, made drawings at night – you know the story already – and brought the technique back to Germany.

As a German, I am especially happy to tell you that Brügelmann has been the only one to honor his source. Because of Brügelmann, there is now a Cromford Mill in the Ruhr area in Germany, named for its role model, Cromford Mill in England.

Due to the mechanization of spinning, one could now spin much faster. It was more efficient, the quality was better, and therefore it was also cheaper.

Faster, better, cheaper! That is, in my opinion, the beginning of the Industrial Revolution. 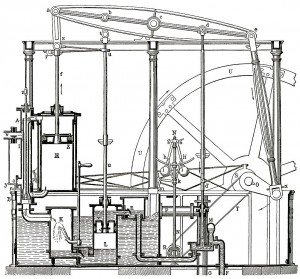 The second important event in the Industrial Revolution was of course the steam engine. There had been other steam engines before, but they were not particularly effective. The first truly effective steam engine was invented by Mr. James Watt, patented in 1775. Together with his partner, Matthew Boulton, founder of the Soho Factory, they produced and sold steam engines. Protected by their patent, they were soon able to dominate the world market. Boulton and Watt were the most important and significant producers of steam engines.

Mr. Watt was a quirky sort of inventor. Often he buried himself in his office for weeks and conducted experiments, for example to find out how he could make a gasket just a bit better.

On the other hand, however, he was not exactly socially adept. When he was in a particularly bad mood, he was known to fire even key employees. Boulton, however, caught them at the factory gates and told them to stay, keeping them out of sight from Watt for the next two weeks. Boulton, so to say, stopped the “brain drain” from happening.

Boulton and Watt had one challenge with the manufacturing of steam engines. That was the cylinder. The technology to drill a good cylinder did not yet exist. The cylinders were hammered out or forged. If you can imagine having to forge a cylinder with a hammer … that is pretty inaccurate.

The first to get it right was John Wilkinson, nicknamed “Iron Mad.” He was the first to build good cylinder-boring machines, and therefore was soon the main supplier for Boulton and Watt’s Soho Factory.

Mr. Watt was very proud of Wilkinson’s cylinders. For example, he stated that the cylinders were so good, so precise, and the gap between the cylinder and piston was so perfect, that he could not stick even a coin in it! Just to show you an example about the expectations on precision at that time.

The steam engine changed the world. Earlier, with water or wind power, you were limited either to where water or the wind was, and then hoped that no drought or dead calm came, and that the wind blew and the water flowed. That means that production was utterly dependent on environmental conditions.

Thus, metalworking rapidly improved. Similarly, the steam engine was also soon strong enough to transport itself. Hence … railroads! If you had a train, then you also needed rails, resulting in a demand for metal, especially iron and steel. Ironworking developed quickly. Many different techniques evolved based on the steam engine and spinning machines. Because of that, production became better, faster, and above all, cheaper.

All this technical advance made life a lot easier for many. However, it also threatened the livelihood of many others, as you will see in my next post.