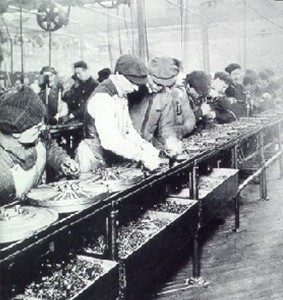 Most of our prosperity and wealth is based on our ability to manufacture faster, better, and cheaper than ever before. To announce the publication of my first book “Faster, Better, Cheaper” in the History of Manufacturing: From the Stone Age to Lean Manufacturing and Beyond here is the third of a four post series where  I would like to explore this story and tell you a brief version of the History of Manufacturing. In this third post I would like to talk about the social problems caused by the industrial revolution and its outburst of Luddism before moving on to the achievements of Henry Ford and his assembly line, but also how his firm was overtaken by GM. 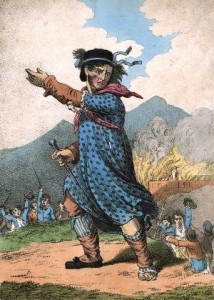 All this technical advance was altogether a good thing, making products faster, better, and cheaper. Unfortunately, not everyone benefited.

Mainly the workers that made their living by weaving had a drop in social hierarchy. This happened not slowly, but very quickly. Within ten to twenty years, the income of weavers was halved. Half of their money was gone. At the same time, prices skyrocketed because of inflation.

Altogether, this meant that a weaver who had been a respected member of middle class ten or twenty years ago was now poor pauper. He fell from the middle class into the lower social class. The weavers were of course not happy with that. As always, when people are unhappy, there is an uprising. They destroyed mechanized looms and spinning machines, they burned down factories, and they even murdered some of the factory owners.

The king of England at the time was actually a rather liberal and cosmopolitan man. However, his French colleague had also had a revolution a few years earlier: the French Revolution. And we all know how that went for the French king – off with his head. And the English king was definitely not THAT liberal.

Hence, the king set a massive army and police force of 40,000 men in motion to try to stop the revolution. At that time, 40,000 men would have been enough to attack another country.

These 40,000 men put down the revolution violently. There were a couple of death sentences, and a few were banished to Australia. Ultimately, the Luddites had failed to reach any of their goals. They wanted a fair wage, a ban on machines, and essentially the return to their former status quo before mechanization. However, they did not achieve any of their goals.

On the other hand, however, you have to say, “Thank goodness they didn’t!” The shirt that I am wearing now cost about fifty Dollar. EUR 49.95, to be exact. Because it is machine spun, machine woven, and machine sewn. If that shirt was hand spun, woven, and sewn, it would not be fifty Dollar. It would be more like five thousand Dollar for such a shirt. And believe me, in this case I would have a lot more space in my closet. Ultimately, mechanization made it faster, better, and cheaper, hence that this shirt cost only fifty Dollar rather than five thousand. 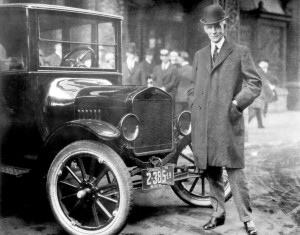 Another step forward was Henry Ford and his Model T, probably the most famous car in history. Henry Ford optimized production through efficiency and productivity. For example, in a motor block, different holes have to be drilled. Until Ford, a different drill was used for every different hole, meaning each hole was drilled separately.

Henry Ford, however, built a drilling machine that had twenty drill bits in the right places, at the right length, and with the right diameter. That means that on the motor block, with one down-and-up movement, twenty holes were drilled perfectly.

With such an approach, Henry Ford enabled great improvements, allowing him to reduce the price of the Model T. His greatest achievement in production, and for which he is best known, was the assembly line. Ford was not the first to use the assembly line. There had been earlier factories with assembly lines. However, he most consistently implemented it for a technically complex high-end product.

The picture shown is the assembly of the alternator. We are not entirely certain where the first Ford assembly line was installed, but it could have been for the alternator. There the workers on the assembly line worked in a row. That means that Ford could regulate the speed and could give each worker a smaller task. With a small amount of work and a predetermined speed, the people learned faster, worked faster, and it became faster, better, and cheaper.

Through that, Ford could lower the price of the Model T dramatically. In 1908, when the Model T first came on the market, it cost about 25,000 Dollar in today’s prices. The car was not really luxury class, but not exactly cheap, although at that time it was one of the cheapest cars that you could buy. All others were closer to a million Dollar, similar to a Rolls Royce.

Ford therefore consistently worked toward making it cheaper, and twenty years later you could have the same car for 4,500 Dollar. And 4,500 Dollar for a car is not that much money. The model therefore sold well, and Henry Ford with his Model T was the largest automobile manufacturer in the world, with over 50 percent of the market share.

Ford’s concept, however, did have weaknesses. Here I have two pictures of the Model T. The top one is a 1910 version, and the bottom one is the 1927 version.

Technically, they are practically identical. The most important technical change was changing the lamps from acetylene, which had to be lit with a lighter, to electric. Otherwise, it was exactly the same car aside from a couple of cosmetic changes to lower production costs and make the cars less expensive. Beyond that, there were no major changes.

In order to start the vehicle, you had to get out and turn a crank, and hope that it did not backfire – which could have broken your wrist. That is how they started engines back then. In 1908 that was acceptable. However, in 1927 it really was not anymore. Nevertheless, from Ford’s perspective, the Model T was the car for eternity. There would always be Model T’s. If things had gone Ford’s way, then you could go to a Ford dealer today and buy a brand-new Model T with the best technology from 1908.

By 1927, however, that was outdated. Imagine if I were to try to sell a twenty-year-old mobile phone today. After twenty years of rapid development, customers just do not want the old stuff anymore. Eventually, and with a heavy heart, Ford gave up the Model T and introduced the Model A.

However, he still had parts for the Model T to last another six months. He could not just throw them away, so for another six months he had to keep producing outdated Model T’s. Finally, the parts were used up and Ford could rebuild the factory.

However, he needed six months to reconfigure manufacturing. Every machine was optimized for the Model T. Some of the machines he could only throw out. Few of them could be remodeled. Just one quarter of the machines were usable as they were. That means that for six months, Ford did not produce a single car. Imagine, in your industry, not making a single product for six months! However, Ford had money. He survived the six months financially, and the Model A became his new car for eternity.

But it was not quite as eternal as he envisioned. Just three years later, the sales figures dropped and Ford introduced the Model B. The rebuilding went much more quickly and did not take six months, but the manufacturing site stood for five months without producing a single car. Hence, flexibility was not one of Ford’s strengths. His vision was more about a car for eternity.

The competition, General Motors, did it quite differently. GM, under the leadership of Alfred P. Sloan, celebrated each new model. Every year a new model came out. In 1927, the Series AA Capital was the first car to take away a significant portion of Ford’s market. Then a year later came the Model AB, AC, AD, AE, BA … every year a new model.

GM celebrated those new models. Where Ford had consistency and permanence, GM always had something newer, better, and more glamorous. Of course, they did not construct a completely new car. However, there were updates that were presented as newer, better, and more glamorous. Therefore, those cars sold better. Relatively quickly, GM became the largest car producer in the world. GM remained in that top spot for decades. It was only in 2012 that Toyota took over that title.

Now Toyota is the largest car manufacturer in the world. Yet Toyota also did something special with their production system, as you will see in the next post.