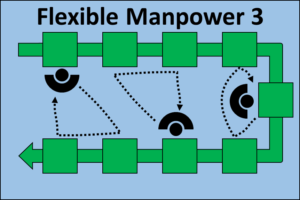 This third post in the series continues with the example on flexible manpower lines. Now we will investigate different options for these flexible manpower lines (also called Shoujinka 少人化). I will show you the details on all options between a single operator and the (sensible) maximum of six operators, and why for our example it does not make sense to use four or five operators.

Continuing our example, let’s start with a single operator. One operator does all processes in sequence, with always 2 seconds walking time in between, except for waking back to the first station, which takes 3 seconds. The standard work combination table could look as shown below. All steps are in sequence, and the worker arrives back at the first station after 195 seconds. However, this would be the cycle time. For the takt time we would need to add a bit of buffer to protect against unforeseen events. In this example, I added 3 seconds waiting time for a total takt of 199 seconds. 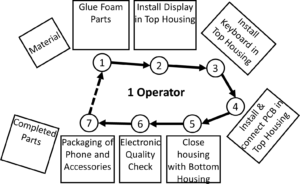 This would be an OEE of 97%, which looks high. However, human workers usually have fewer problems and breakdowns than machines, and human workers can and do catch up if there is a problem. Hence, with one worker we would be able to fulfill a customer takt of 199 seconds or slower. This is also the minimum sensible output of the line. If you need less time, you would have to reduce the working time of the line. The layout could look like the image shown here. The single worker circles all stations before returning to the first station.

Next let’s look at the other end with the maximum number of operators. We do have seven workstations, which would allow a maximum of seven workers in the system. However, step 6 quality check is mostly machine work, and a worker can complete step 7 while step 6 is in automatic mode. While you could place seven workers in the system, there would be little benefit, and a system with six workers performs equally well. Since all but the last worker have no walking distance, the standard work combination table would look like this. Stations 1 to 5 are manned by one worker each, and stations 6 and 7 have a single worker for both stations. 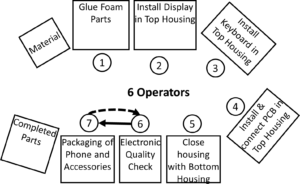 The worker with the largest work content (for stations 6 and 7) would complete his round in 34 seconds. Allowing again for a bit of safety, we arrive at a takt time of 37 seconds. Hence, this line would be able to satisfy a customer demand of 37 seconds or slower if there are six workers in the system. This would also be the maximum output the system can handle. If you need more, you would need to increase working time on the line (e.g., additional shifts), improve performance, or add another line. The corresponding layout could look like this. All stations have one worker each, except one worker for station 6 and 7. 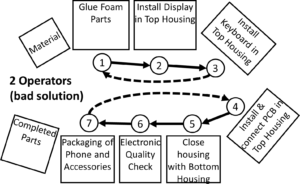 There is also the possibility of running the line with two operators. Just to illustrate a point, the first layout here on the right is NOT a good layout, since there are lots of walking distances for the workers. The second layout below would be much better, since the distance traveled by the worker and the time required for walking would be less. 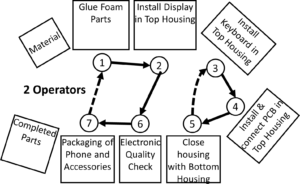 A possible standard work combination table could look like the one below. Worker 1 handles stations 1, 2, 6, and 7; while worker 2 handles stations 3, 4, and 5. The worker with the largest work content, worker 2, would be done in 99 seconds. Adding some safety, we get a line takt of 103 seconds. Hence, this setup could handle customer takts of 103 seconds or slower. 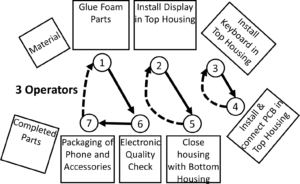 Finally, we have the setup with three operators. Here, too, we would have multiple possible combinations. Below is the layout and the standard work combination table. The worker with the largest work content, worker 1 would complete his tasks in 62 seconds. Adding some safety this setup with three workers could satisfy a customer takt of 70 seconds or slower. Please note that feasible other solutions exist.

What About Four and Five Operators?

Having seven workstations with at most six operators, we made standard work sheets for one, two, three, and six operators. What about four and five operators? Well, while this is theoretically possible, it would not make sense for our line. Our example line is reasonably well balanced, and each task has about 30 seconds (and tasks 6 and 7 together also around 30 seconds). No way how you divide it, if you add additional workers, you just add more waiting time. Let me show you. 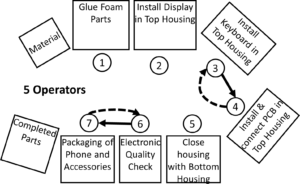 Let’s make a system with five operators. We have one operator cover stations 3 and 4 as shown in the layout below besides the operator for stations 6 and 7. All other stations (1, 2, and 5) have only one operator. Below is the standard work combination table.

The outcome would be pretty bad. The operator for stations 3 and 4 has now twice the workload of all other operators, and completes his tasks in 61 seconds. Since the line cannot move faster than the operator with the most work content can, our line also cannot move faster, and, including some safety, we get a line takt of 67 seconds. With three workers we had a takt of 70 seconds, and after adding two more workers we get a measly two-second improvement in the takt time?! This is not worth it; instead of improving the output, we merely increased the waiting time of the other workers. 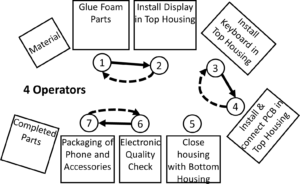 A similar result would have happened with four operators. The work content in the different stations just can’t be distributed well, and you cannot make a well-balanced line with four or five workers. Here is the layout and the standard work combination table for four operators. Other solutions exist, but they are not better than this one. The worker with the largest work content (for stations 1 and 2) finishes his round in 65 seconds. With some safety you get a line takt of 68 seconds. You add one extra operator and all you get out of it is a reduction in takt time from 70 seconds with three workers to 68 seconds with four workers. These measly two seconds are also definitely not worth the extra worker, which just causes a lot of waiting time in two of the four workers. 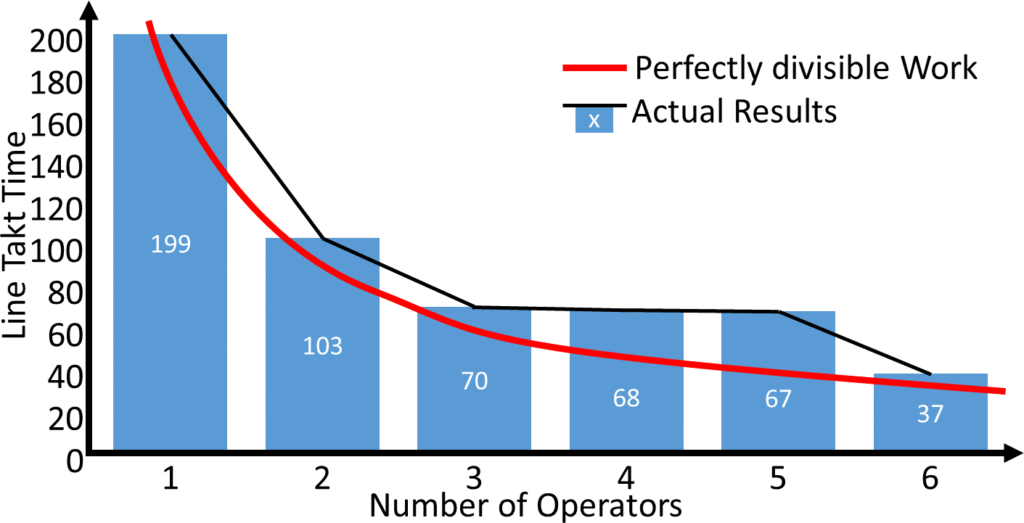 The graph below shows you the line takt times for different numbers of operators. The blue bars are the actual takt time (connected with black lines). The red curve would be a theoretical optimum if the work at the station would be infinitely divisible without any walking time. This theoretical line is simply the work content of 180 seconds divided by the number of operators. Unless you optimize the actual work, you will not have a takt time below this line.

In my next and last post on this series on flexible manpower lines, I give you a brief how-to on flexible manpower lines to explicitly show you the basic steps. I will also give you some easier but not quite as efficient alternative options like the bucket brigade or the rabbit chase. Now, go out, make your lines flexible by adjusting the number of operators, and organize your industry!