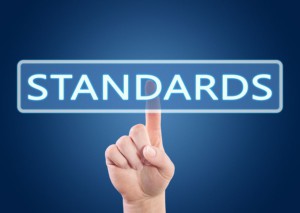 Standards are one of the backbones of lean manufacturing. For a standard to be good and used consistently, it should be self-explanatory. Additionally, you should understand it well enough to easily recognize deviations from the standard. I would like to give you an example of how my thought process works when exploring a standard.

As part of my job I frequently visit different plants and other locations. These tours often come with a lot of explanations by the guide. However, to be totally honest, a lot of these explanations are a bit distracting to me. I’d rather watch the progress in action and focus on what I see rather than focusing on listening to someone. Figuring out how it works somehow gives me a personal satisfaction.

As part of the recent Lean Global Network (LGN) annual meeting in Barcelona and Tenerife, I was able to visit the Consorci Sanitari del Garraf hospital near Barcelona. We were a bigger group, and the explanations were translated from Catalan into English, hence it was a perfect opportunity for me to focus on what I see.

Before I start, I would like to point out that this approach does not work in all plants. If there are no standards visible or followed, then you can’t really understand the standard, much less see deviations from it. However, recognizing no standard already tells you a lot about the plant.

In this particular hospital, we were told that it is just starting out on its journey, and that we (a bunch of hardcore lean experts) should be gentle with our feedback. However, this request would not have been necessary, as I indeed quite liked what I saw. The hospital was doing lean quite nicely.

After the obligatory introduction, our tour started in the surgery ward. While they explained their scheduling board, I got interested in their medicine cabinet. No, I did not stock up on everybody’s favorite drug, OxyContin (DON’T DO IT!!!), but I was interested in their material supply system. At first glance it looked structured, and all boxes were properly labeled. So far, so good. 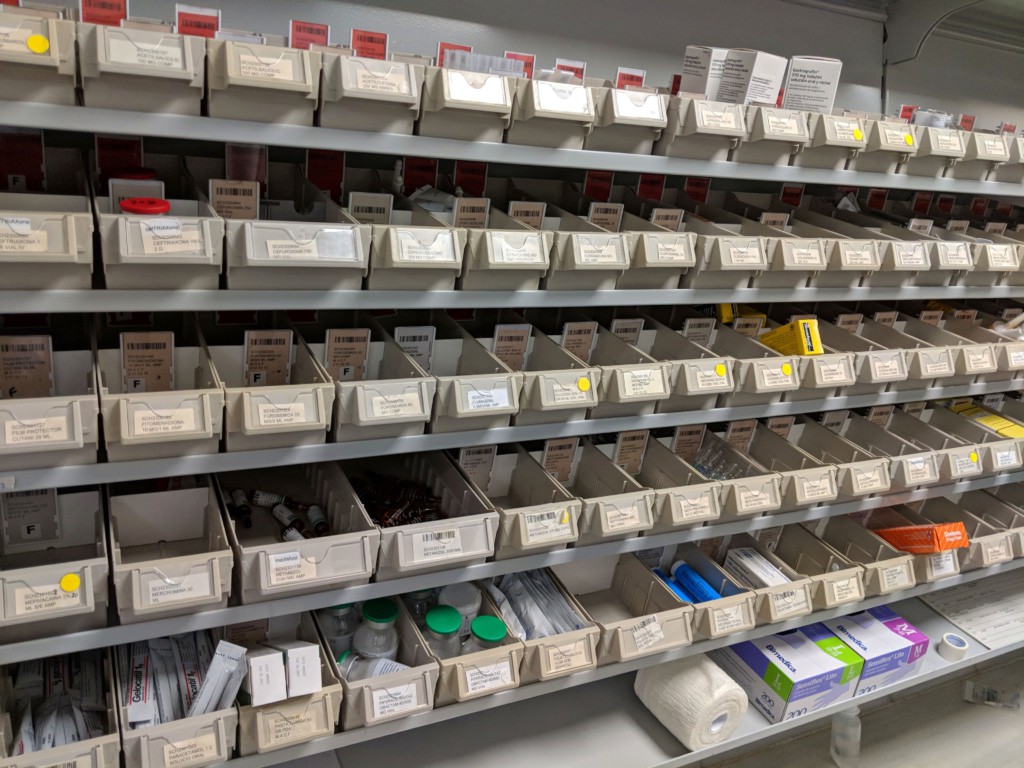 I took a closer look at the boxes. They seemed to usually have three almost identical labels. The box itself was labeled, and split with a divider (except for larger items where they had two boxes next to each other). The divider and the back had a removable label each with a barcode. The rear label also was colored signal red. 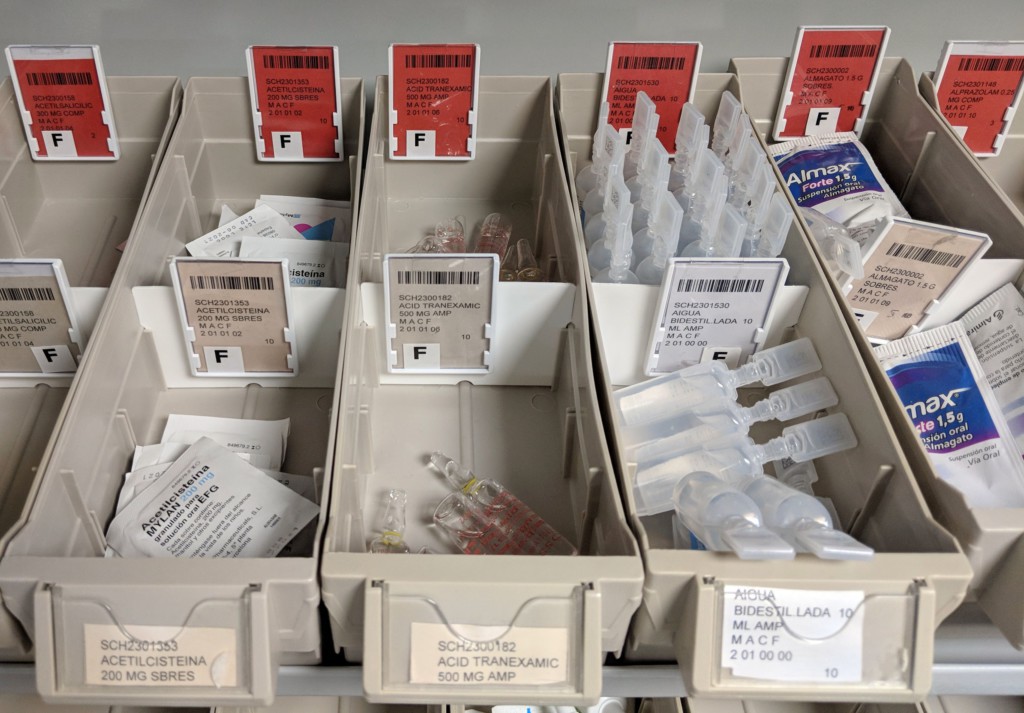 This looks very much like a variant of the two-bin kanban system: if one box is empty, it is refilled. While it is being refilled, the other box is used. One box hence needs to last at least long enough while the other is refilled. 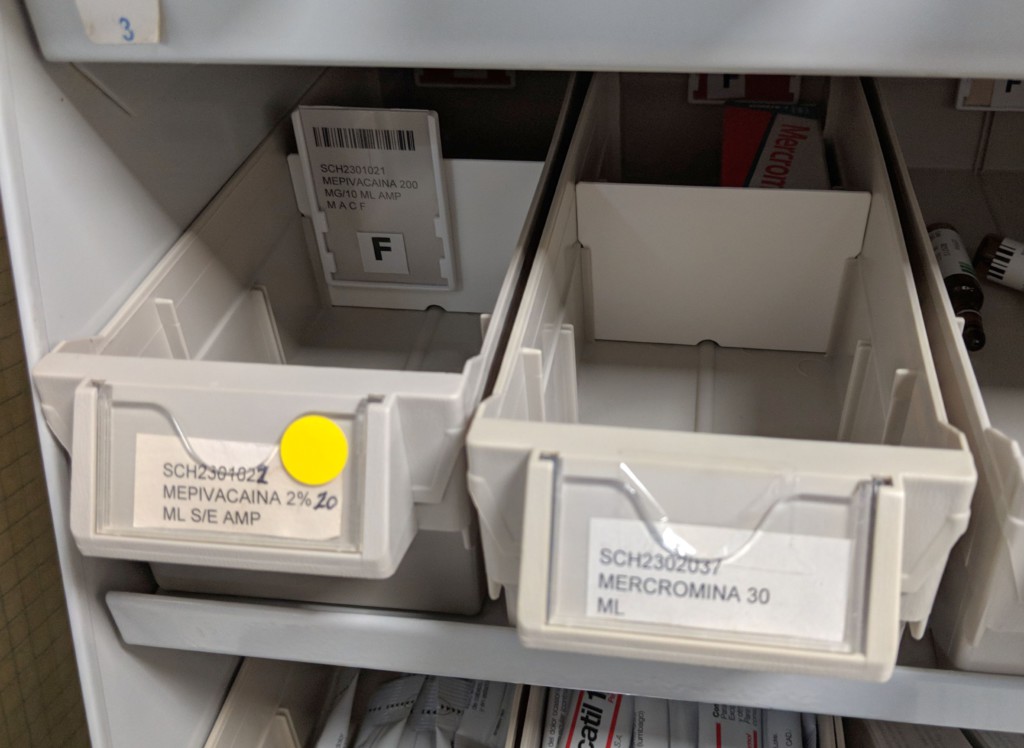 This is now a bit unclear. If the card is a kanban, when should it go back? Toyota sends the kanban back when the first part of a box is removed. Here this would be not ideal, since the material would return while both halves of the box are still full, leading to problems with maintaining FIFO and potentially expired medicine.

Hence, now I had to ask. It turned out that the kanban should be sent back when removing the last part in the box, and hence a few workers did not quite follow the standard as well as they should have. However, getting workers to consistently follow the standard is often an uphill struggle. Yet it is a good standard since I noticed the deviation without any explanation.

Anyway, in the back of a room I noticed some magnets with kanban stuck to them. This is the kanban post (or kanban box) where the kanbans for empty boxes are collected to be refilled. A closer inspection of a sample empty box indeed showed the kanban at the wall (here, the Mercromina from the photo above with the kanban below).

It is also clearly visible that there are no red kanban on the kanban post. The red color was used only for the second box, hence it seems to be a visual indicator (visual management) that they now really ran out of parts! No red cards means everything is A-OK.

At another location, the kanban post did have some red kanban attached. This means that they’d run out of material since they removed the kanban with the last part. This is a problem. The good thing is I was able to recognize this right away due to the good visual management. 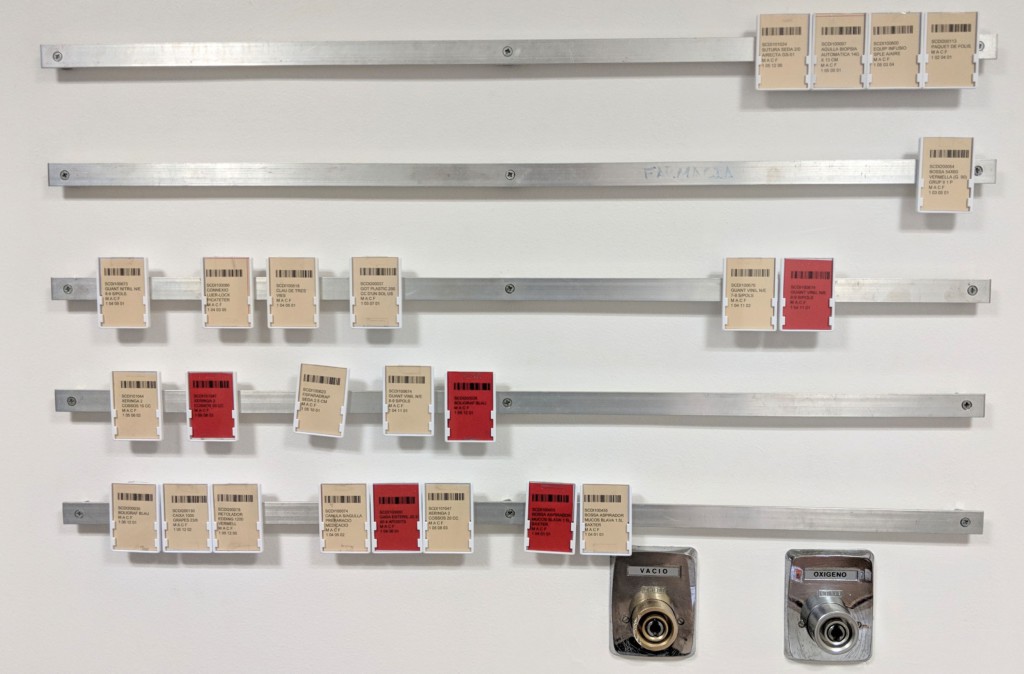 Where to Put What?

I think I now understood the flow of the kanban back to the central warehouse. However,  how does the person who refills the inventory know where to put what? I found a list attached close to the inventory, and was able to match material in the supermarket to the list. The left number was the material number, but the right one was unclear, hence I had to ask again. Indeed the right number was an indicator of the location, in this case room 1 shelf 07 level 02 and 01 for front part. This location code was also on this kanban. However, the image of the other kanban above seems to have a different code (Mercromina was M A C F), and I did not figure that code out. 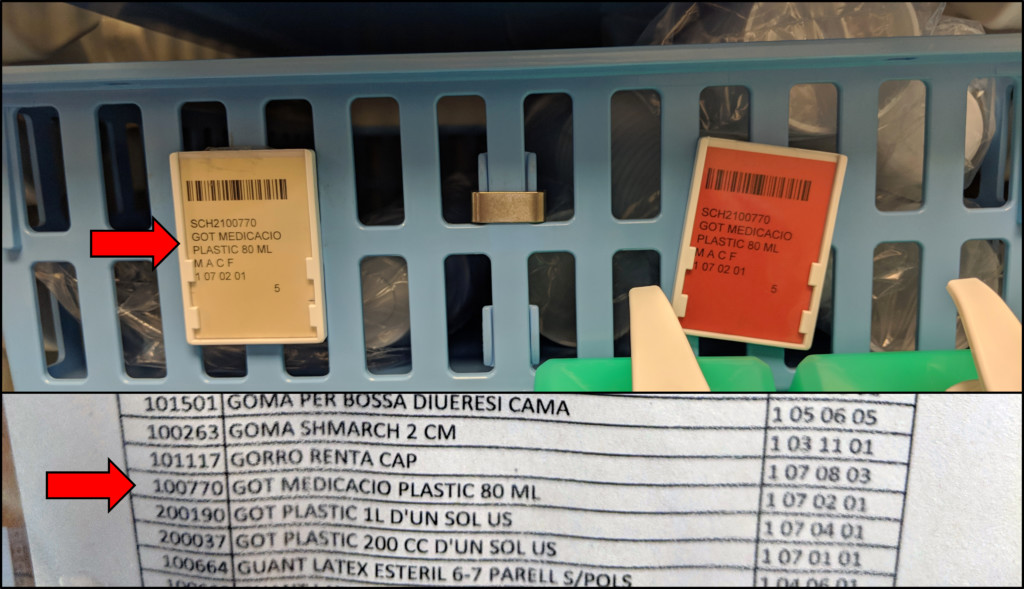 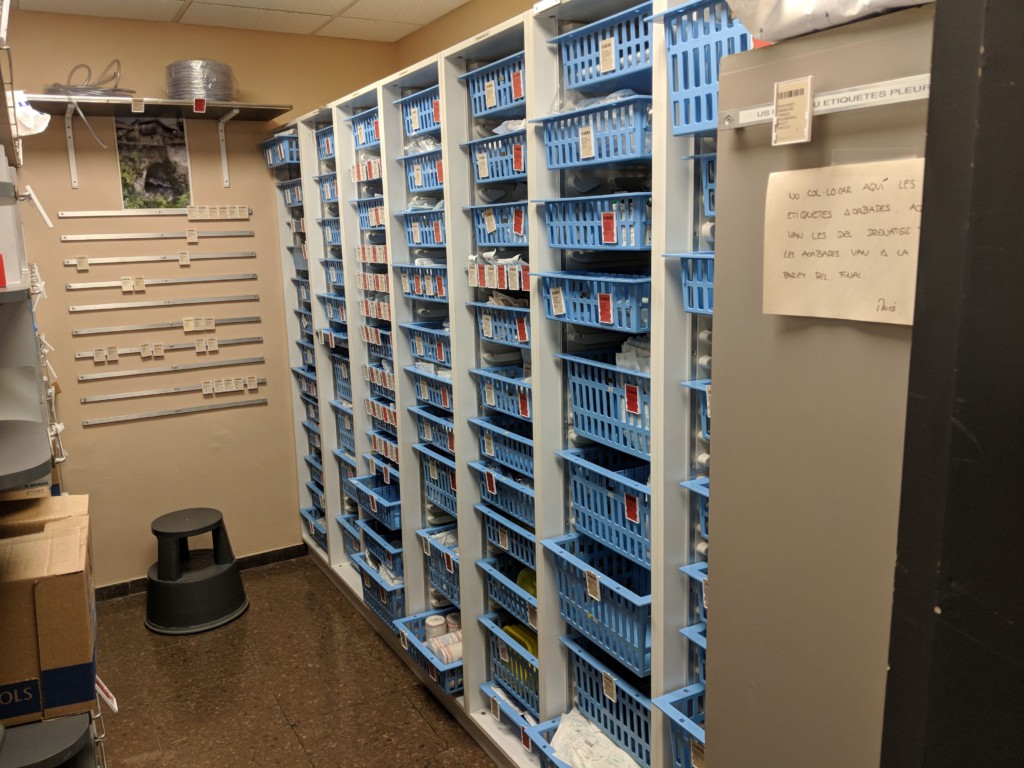 However, there were a few instances of materials without kanban. There was some medicines that had no kanban but only a date on them. These may be materials that are infrequently used and were a special order.

Another location, however, had frequently used material like blood tubes and bed sheets outside of the kanban system. As there was no standard visible, I had to ask again. They said that these “were different suppliers and hence no kanban were necessary.” Since I am a strong believer in kanban for frequently used inventories, I interpreted this as “they did not yet get around to doing it.” 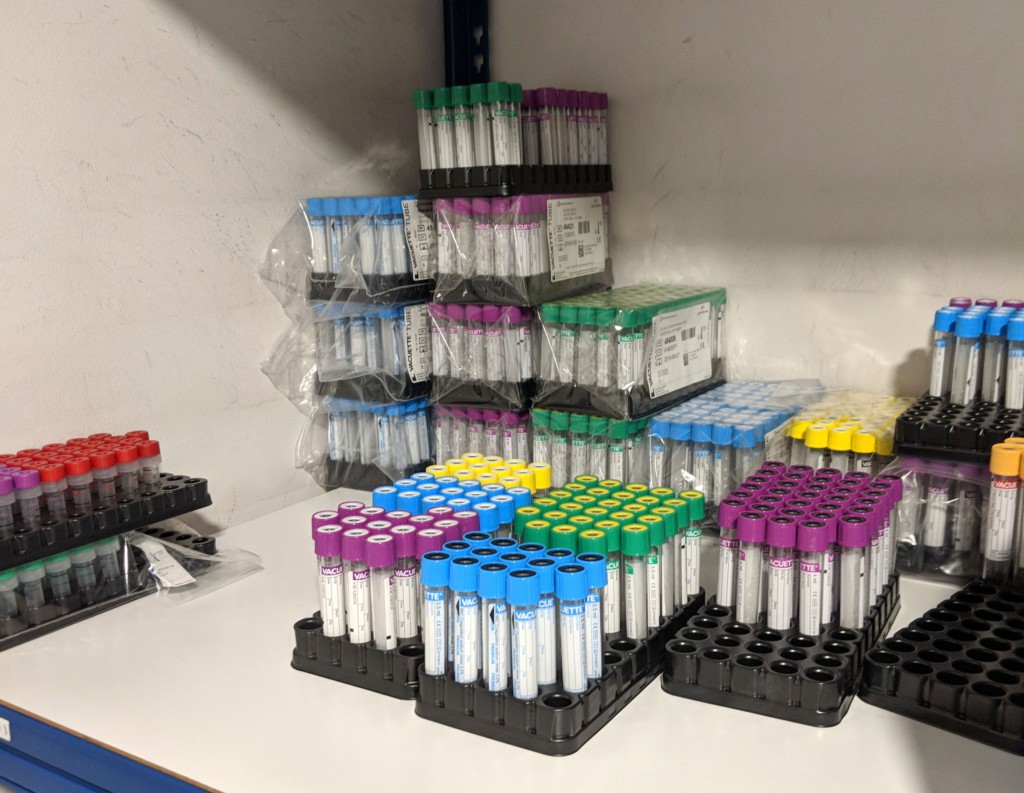 Overall, I think I understood the standard and its deviations rather well. The only thing that I did not figure out is how often the materials are delivered and how often the kanban are picked up. But otherwise, I liked the standard, it was reasonably easy to understand, and I could recognize deviations and problems in the standard even without (much) explanation.

There were many more nice lean things to see in the hospital, such as how they organized their beds, how the emergency trauma center was set up, and – my personal favorite – a pink dotted line for expectant mothers leading straight to the maternity ward 🙂 .

Overall, I hope this blog post helped you to understand how I try to analyze standards. Another example is written work instructions with photos at Toyota. However, these are not necessarily hung up in a way easy to see for the operator – he should know the standards by heart. Instead, they are displayed for the external observer so that he can see if the worker follows the standard or not. Now, go out, create standards on your own shop floor that I can understand without explanation, and organize your industry!

P.S.: Many thanks to Oriol and his team at the Lean Institute Spain for organizing the event and the tours, and also helping the hospital with their lean journey in the first place! Many thanks also for the Consorci Sanitari del Garraf hospital offering the tour.

6 thoughts on “A Good Standard Needs No Explanation”