The first plant we visited as our van full of nerds touring southern Germany to study Industry 4.0 was the Bosch wafer fab RtP1 in Reutlingen. Quite impressive. Let me show you what we found:

The Bosch wafer fab in Reutlingen produces – as the name implies – wafers. These are used on chip sensors. Probably 90% of all mobile phones in the world have a sensor from this plant. As with all wafer fabs, it is a highly complex material flow with around 800 steps to produce one waver, and the material flow doubling back on itself multiple times, including a loop over the Near East. There are multiple wafer lines in the plant, and we looked at the 200mm-diameter wafer line. They also have a 150mm line and a MEMS (micro-electro-mechanical-systems) line. The chips have between 7 and 34 layers. The smallest structures on the wafers are around 240nm, much larger than high-end computer chips with down to 7nm, but quite sufficient for sensors. Due to the larger resolution, the yield is also much better, around 94%–99.9% good chips. They also create micro-machines as part of their sensors.

Like most wafer fabs, precision is crucial, and even small factors, like the rumbling of a truck on a nearby road or even the wind, can distort the results. Hence, the factory has a large foundation, and is practically a building in a building, where the outer building protects the inner one from the wind. 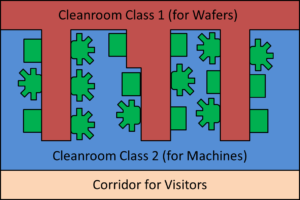 The cleanrooms are actually split into two zones. The inner core, where the wafers are handled, is a cleanroom of class 1 with <10 particles of <0.1µm per cubic meter. Around this is the second zone where the machines are. This is a cleanroom of class 2 with less than 100 particles per cubic meter. The wafers are moved through openings between the two zones directly into the machines. This is shown schematically in the image here.

As far as lean goes, it was difficult to get a good understanding by just looking in from the outside corridor. Our presenter mentioned that lean and Industry 4.0 work well with each other. 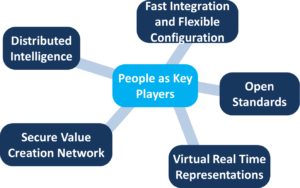 The Industry 4.0 model at Bosch has seven key elements as shown here. Six of them are arranged around the “People as Key Players” in the center, which was very important to the unions.

Obviously, an RFID chip is attached to pretty much everything, and at every step it is checked to be sure the products are what they should be.

The wafer fab has a high level of traceability, where every single chip can be traced back to where and when it was made. The decision to go for full traceability was made in 2017 to successfully to improve quality. They gave us one example where they noticed a slight increase in defects for chips. Based on their position of the wafer and the nature of the defect, they could track a likely source of a machine at a supplier in Near East, where a particular screw was probably misaligned. When they told the supplier, the supplier thought they are crazy … but they were right. This system generates around 50GB of data every day. Their philosophy is “As much information in the virtual world as necessary, as little as possible.”

They have an R2R (Run to Run) system where the machines communicate with each other to optimize performance. For example, if a machine detects that a coating is slightly to the thicker end of the tolerance limit, information is sent forward to the next machine to etch 1 second longer, and also relayed back to the previous coating machine to reduce the coating time by 2 seconds to adjust for this behavior. Implementing this was a lot of work, and the algorithms are hard-coded by a team of 4 people (not artificial intelligence … yet). Hence only the most relevant machines are included in this R2R system. Yet this greatly reduced the rework within the wafer fab.

They also use robotics extensively in the plant, with robots doing about 50% of the wafer handling. This was also a gradual change. They started with robots that were permanently mounted in one location. Then they introduced robots on sliding rails in 2014 (“HEROrails”). Finally they started to use fully autonomous robots in 2017 (“HEROfab”) and self-navigating autonomous robots (“SCOUT”). To get the people used to the robots, they initially just had them move around on the main corridor. This allowed the human workers to build trust in the ability of the robots to stop and not run the human workers over. To further make them part of the family, they gave them human names (Margarete, Paula, Robert, Eva … the children of Robert Bosch).

They also use RTD (Real Time Dispatcher), a mixture of rule-based and artificial-intelligence scheduling to optimize and prioritize the production schedule in real time. Goals include line balancing, customer priority, delivery dates, bottleneck management, and quality. This is quite tricky for the complex and iterating material flow in a wafer fab. However, they measured that human workers followed this sequence only 80% of the time and often used a different sequence than the one suggested by the AI. As it turned out, humans were able to see problems and understand the system sometimes better than the AI, and by changing the sequence outperformed the AI. Guess we humans are still able to compete with AI 🙂 . They also need human ingenuity to drive continuous improvement, which computers also still cannot do.

Overall a quite nice plant with a lot of cutting edge technology. My next post will look at Kärcher, a German maker of home and industrial cleaning equipment, and Siemens. Until then, stay tuned, go out, and organize your industry!

P.S.: Thank you very much to everybody who hosted us and showed us their plants and products!