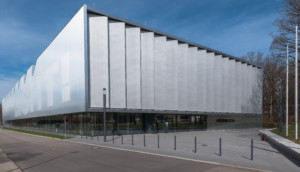 To round up our tour of a van full of nerds to study Industry 4.0 in Germany, here is the report on different presentations and tryouts. These were not plant visits, but different demonstrations by some smaller and one not-so-small (Bosch) companies. The first four were at the Arena 2036, a research collaboration to explore the future of the automobile. The other three were at the respective companies locations. Also quite insightful.

Below is a very brief summary of some of the presentations and tryouts we had during the tour. Keep in mind that these were all demonstrations, and not “normal” use in production. 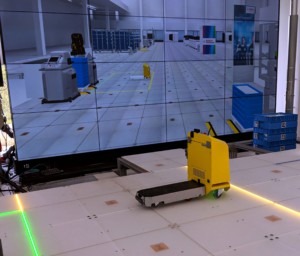 The Arena 2036 is a research collaboration to explore the future of the automobile. This includes its production. Bosch had an area where they researched on flexible planning of assembly lines. Their goal is not primarily the research of technologies, but the interaction of these technologies in the factory of the future. They want to explore which technologies will be useful in the future and what applications they can be used in.

Using NAiSE sensors (see below) they could determine the location of their machines, parts, and stations with high accuracy, and could create a real-time digital twin. If they moved the workstation, the station also moved in the digital world. They also used Pick by Light from ThingOS (also more below). Overall, it was a nice demonstration, although it is unclear when if ever this technology will be used for real shop floors. But then, their goal is to research the future possibilities.

Drag&Bot is a small startup that aims to simplify robot programming. The goal is to use the same software interface to program robots of all kinds of brands (ABB, Denso, Kuka, Universal Robot …). The programming is a teach-in approach where the robots are guided by hand. It looked useful, although it is not my area of expertise. 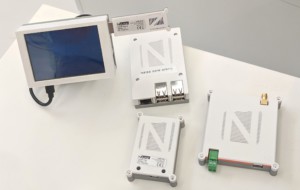 NAiSE provides an integrated system of hardware and software. The hardware (sensors and base stations) determine the exact position of items on the shop floor. The software can optimize routes. It is something similar to Google Maps for industrial and commercial buildings. Compared to other systems, it needs relatively few base stations. For the 7,000-square-meter arena they needed only 6 bases to achieve an accuracy of up to ±1 cm for immovable objects and ±7cm for moving objects. It does not need a line of sight, but like all similar systems, metal blocks the signal, and steel shelving would cause problems (or require more sensors). 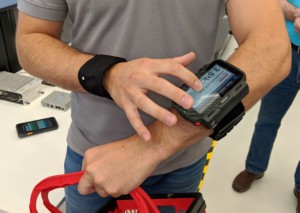 ThingOS provides a platform to combine the numerous smart sensors that are part of modern Industry 4.0 and the smart factory, but also smart home and smart retail.

What I liked was their Pick by Light system. Rather than using expensive motion sensors, lidar, infrared, or light barriers to detect a pick, they simply stick a cheap RFID chip on every box and put a RFID reader on the wrist of the picker. The photo here shows the RFID sensor on the dominant right hand, and a small digital interface on the left hand. 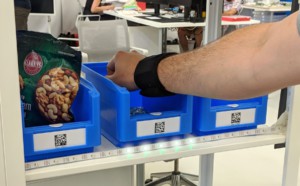 This interface also tells the user “three pieces” … “one piece” and so on for each pick. The second photo shows a “pick.” They claim that their technology is 100 times cheaper than their competitors’. I am not sure about the 100 times, but it does look significantly cheaper than the other Pick by Light technologies that I know.

Robogistics Laboratory at the Karlsruhe University of Applied Science

The Robogistics Laboratory at my university, the Karlsruhe University of Applied Science, is researching on the use of robots in logistics. My colleagues there are Prof. Christian Wurll and Prof. Björn Hein. Among the many things they do, we looked a bit more in detail on how to pick up shoe boxes from a bin – which is not as easy as it sounds. The boxes may be on top of each other, and also they are not firmly closed. This risk is that the robot grabs the box at the wrong end and the shoes fall out. A change in the box design apparently is not possible, since – surprisingly for me – these empty shoe boxes are also a collectors item.

R3DT provides a virtual-reality tool for shop-floor design reviews. I tried their product two years ago and found it a bit “clunky” and the hand sensors odd. Since then it has come a long way, and you no longer need to hold anything in your hand. The Leap Motion sensor attached to attached to VR glasses, like Oculus Rift and HTC Vive, can detect your bare hands in real time and add them to the virtual environment. Hence, moving your hands and controlling the software felt very natural. 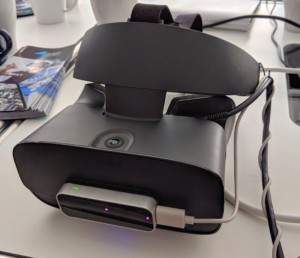 The latest version of the Oculus Rift, the Oculus Rift S, also no longer needs external trackers to determine your position. Overall it was very immersive – except for the grabbing and handling items. Picking and placing of items is possible, but not (yet) flawless.

What I liked, however, was the option “Ergo Check” to “scale you down.” With a height of 187cm, I am above the 95th percentile male, meaning less than 5% of the men in Germany are taller than I am. Using the R3DT software, I could shrink down to a 5th percentile female, meaning I was now only 153cm tall. This was a completely new and 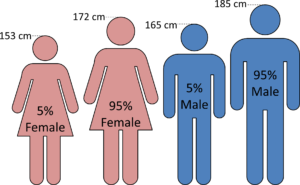 surprising perspective! I no longer could look in or even reach boxes. The work surface was suddenly at chest height. Working at this station would have been much more difficult. Knowing this is one thing, experiencing it a completely different thing. According to R3DT, this is a world first in this simple form.

R3DT also has some other features like measuring distances, creating cross-sections, analyzing the reach and the visual field, and more. It was an interesting experience, although I think it makes only sense if you have a digital model already available. Creating a model from scratch is very time consuming, but the tool is intended primarily if you already have a computer model of your manufacturing system. It is already used by quite a few big-name companies. They also provide trial versions. Below is a video of one of their use cases where they check the reach of an operator at a workstation.

Our visit to the Bosch Feuerbach plant was not so much to look at the plant, but at the Bosch Nexeed Transparency Kit and the Bosch Connected Industry (BCI). This kit aims to create more transparency for machines on the shop floor. This is done in two different ways: First, there is the option to get sensor data directly form the machine. A Y-splitter is added where the sensor enters the machine control, and the sensor data is also given to a small computer belonging to the Nexeed transparency kit. Second, dedicated sensors are available (light sensors, weight sensors, etc.) that also send data to the Nexeed transparency kit. 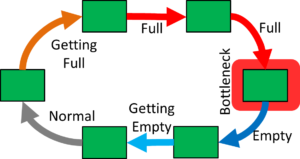 This bridges the often-cumbersome interface between the machine controller and the MES (manufacturing execution system). This allows, for example, bottleneck detection similar to my bottleneck walk and also sort of a “heat map” on where the material starts to jam up. The sensors kept track of the inventory between the stations. We observed this system also on a diesel engine component line in Feuerbach. As many Bosch lines, this line was highly automated and well organized in a very clean plant.

And that is it! The entire five days with a van full of nerds compressed into 6,000 words and quite a few blog posts. Overall, our impression was that while there is definitely quite a bit of boasting and trying to impress, many of the technologies actually work. My personal preference was the ABB Stotz Kontakt plant, since we had a strong feeling that they do Industry 4.0 not to impress the customer, managers, or anybody else, but because they truly want to see what helps them with the performance of the plant. But all the other plants had very interesting points and worked hard to follow their own path.

Many thanks to all the companies and plants that hosted us and shared their ways with us! It was a great week with seven other nerds, and we are already thinking about repeating this exercise next year (maybe in France, or maybe in Silicon Valley?). We will see, and I surely will keep you posted! Now, go out, make sure you use computer only where they are actually useful rather than only impressive, and organize your industry!

11 thoughts on “Industry 4.0 Tour in Germany – A Van Full of Nerds – Presentations and Tryouts”