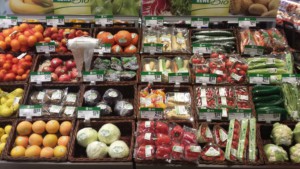 Japan is a wonderland for anybody interested in lean. Of course there is the archetype of lean manufacturing, the Toyota group and its Toyota Production System. However, access to Toyota plants is restricted, and during their guided tours you can observe only so much. (See for example my post on Evolution of Toyota Assembly Line Layout – A Visit to the Motomachi Plant as the result of such a tour).

Fortunately, the goal to achieve perfection is also found in many other processes in Japan, many of which you can observe almost anytime, whenever you like and for how long you like. In the past I blogged about Lean in the Japanese Public Toilet and Japanese Standard Pointing and Calling on Japanese trains. This time I’m looking in more detail into the Japanese supermarket, in particular its checkout system.

All modern supermarkets are based on the Piggly Wiggly store that opened in 1916. Besides the nowadays standard retail store, the name “checkout” was also given to the inventory management system based on kanbans (see Theory and Practice of Supermarkets for more).

One step in the supermarket is the checkout, where you pay for the goods. I’m sure you are familiar with this.

Now, supermarkets face quite a bit of volatility during the day. The busiest time for is usually late afternoon, between 5 p.m. and 6 p.m., when people stop by on their way home from work.  Another busy time is weekend afternoons, especially Saturday afternoon. In contrast, weekend mornings are much less frequented, and weekdays at 8:00 a.m. you also have the store almost to yourself (because the working population is at work and the non-working population is still in bed).

During the day, the number of customers can increase six-fold and more. If manufacturing would face such a daily volatility, it would probably simply use a buffer inventory. However, unlike with parts, few customers would be happy to wait for four hours at checkout before their order is processed, merely to balance the workload for the supermarket.

Hence, supermarkets cannot decouple their fluctuations through inventory or waiting, but have to decouple mostly by adjusting the store capacity at checkout (see also The Three Fundamental Ways to Decouple Fluctuations).

Most supermarkets in the Western world simply have multiple checkout lines and add or remove staff according to the demands. If the lines at checkout are getting longer, another cashier comes and opens another register. If they get shorter, a cashier may close his register. So far probably no surprise to you.

The problem is more the intense competition among Japanese retailers. The profit margin in Japanese supermarkets is very thin (as quite a few foreign supermarkets had to find out). Hence, adding multiple checkout lanes just to cover peak demand is a waste of space.

One Person per Checkout 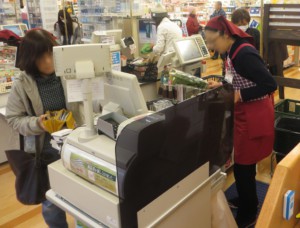 Some supermarkets in Japan have a quite ingenious solution. But first let’s look at the “normal” mode, similar to what we would find in a Western supermarket. If the demand increases, more and more checkout lanes are opened until all registers are operating with a cashier.  The images here show such a cashier in detail. (Note that on all images I blurred the faces for privacy reasons). 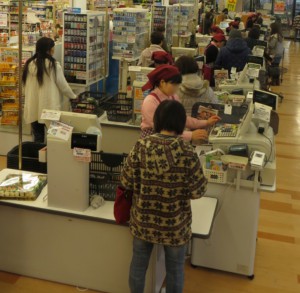 For the entire supermarket (example from the southern island Kyushu), this would mean a total of seven checkout lanes. After all seven lanes are open, no additional lanes are available. So far everything is similar to a Western supermarket.

Please note that the handling of the goods especially differs widely among supermarkets and countries. In America, the goods are often bagged into shopping bags at checkout, whereas when Walmart tried this service in Germany, the cashiers got yelled at. 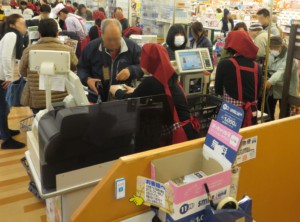 Anyway, back to the Japanese supermarket. If the number of customers increases even more, these Japanese supermarkets use a trick that I have not (yet) seen in the Western world. They add a second cashier to each checkout lane. Overall there will be not one but two people for each lane! Please note that this second person is not the person bagging the items. While this is common in the USA, it is rare in Japan. The second person is also a cashier. 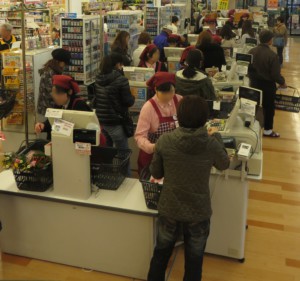 As seen in the pictures here, there are now two people at each checkout lane. The separation of work is roughly that the first person scans the items and puts them in the next basket, whereas the second person handles the payment of the goods.

Please note that this standard is not fixed, but the two workers help each other if one is faster than the other. I am pretty sure there are even more standards behind this that I don’t even know.

Overall, even though the entire checkout lane is manned by two people, it feels like a seamless integration of the processes, and there is pretty much no difference for the customer – except that now two people can be serviced at the same time. 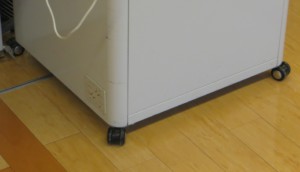 One additional detail that I noticed was that all registers were on wheels. If there is a change from one to two cashiers, they simply moved the register a few centimeters outward so that they have more space. If the staffing was reduced to one cashier per checkout lane, they simply rolled it back in a few centimeters so the distances were shorter. Overall, there are a lot of little details that not only make this system work, but also make it much more efficient!

This system has quite a few advantages. You can service (almost) twice the number of customers with one checkout lane. Or, if you will, you need less lanes, and hence less space, and hence have more area available for goods to sell. You can also maintain a good customer service level even at peak times. In the pictures above, the lines felt much shorter and faster than what I was used to in my native German supermarkets.

On the downside, there is not really much besides setting up the system and training the workers (and of course, continuously improving the system), although this effort also must not be underestimated. 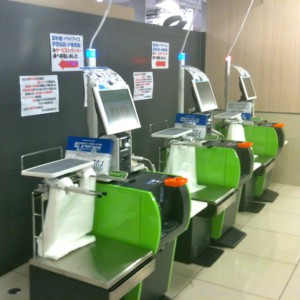 Some supermarkets opt for self-service checkout registers, not only in Japan much in much of the advanced world. While this would reduce labor cost, the system still requires the customer to conform to the technology, and hence is more difficult for the customer.

Even I, as a computer-savvy guy, get a little bit more nervous with a self-service checkout register. I would still prefer a human cashier. For me, the technology is not yet quite good enough. However, Amazon recently opened its first supermarket in Seattle, Amazon Go. This store, according to its advertising, is much easier to use than any normal self-service checkout register. I am curious to see it for myself.

Overall, in Japan it is just amazing to see little tidbits of small but ingenius implementations of ideas and improvements. Every time I go there I see something new, and will of course blog about it. Hence, I hope this was interesting to you, and gives you ideas and analogies that you can use in your industry. Now, go out and organize your industry!

8 thoughts on “Lean Tales in Japan: The Japanese Supermarket Checkout”