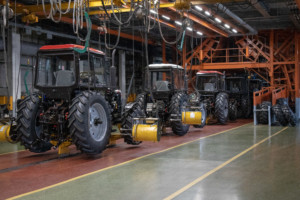 I am a strong believer in the advantage of flow shops. To me, job shops are an inherently chaotic system. While there are ways to manage job shops, these are merely (more or less) successful attempts to put a Band-Aid on the chaos. To me, only a conversion to a flow shop will bring underlying stability. In this post I would like to give you both historic and current examples of successful conversions from a job shop to a flow shop.

I have written about the change from job shops to flow shops before, for example Why Are Job Shops Always Such a Chaotic Mess?, How to Convert a Job Shop into a Flow Shop, and Performance Comparison of Job Shop and Flow Shop. One of these posts recently led to a heated discussion on LinkedIn, where vocal proponents of job shops accused me of not knowing anything, and even resorted to name calling (at which point I ignored these threads; I don’t have time for trolls…). You see, lean can get quite heated too. Many thanks, by the way, to those participants who reported successful transformations from job shops to flow shops and supported my view.

Anyway, one request I got was to name successful transformations from job shop to flow shop. Well, there are plenty. Some I have been involved in but I cannot write about due to nondisclosure agreements. But there are tons of examples in literature, plus a few I know personally and can tell you more about. Hence I would like to write about some examples where high-mix, low-volume production was transformed into a flow shop, despite all the old hands believing it to be impossible. Some are historic, some are current. Some of these examples are plants that transformed from job shop to flow shop; others are examples where a new plant was built as a flow shop from the start for a high-mix, low-volume product.

A more modern example would be the Eagle boat assembly line by Ford during World War I. They built three assembly lines on which as many as 21 Eagles could be under construction at once. However, I do not know how much of a mix these products were. Since it was under Henry Ford, he probably tried to make all boats exactly the same. There are other examples of military shipbuilding on an assembly line (e.g., World War II torpedo boats at the Higgins boat assembly line), but these may also have been very identical.

Definitely not identical are modern pleasure boats, which are highly customized to the wishes of the client. For example, Bavaria Yacht has four different production lines, where the hulls are provided with engines, wiring, furniture, lamination, and so on. Similar assembly lines are at the Riva boatyard, and probably many more. All of these are high-mix, low-volume assembly and/or manufacturing lines.

We can find similar examples for aircraft. Junkers had an assembly line even before World War II, where, by the way, the lean word “Takt” comes from. But again, these planes for the military are rather alike.

Similar to boats, planes are also more customized for private customers. Almost every larger manufacturer of planes uses assembly lines. I have personally spent time on Airbus assembly lines. Definitely a high-mix (every plane is differently customized) and low-volume environment, as all of Airbus makes only about two planes per day worldwide.

The same applies to Boeing (the picture here shows the Everett factory), Bombardier, Cessna, and many more aircraft makers.

Automobiles is a bit of a special case. They started out as project shops (all material to one location) before different manufacturers used flow lines. The most famous automaker is Henry Ford, whose efficiency gains through the assembly line made the car affordable to almost everybody, and also made Ford incredibly rich. However, he was famous for making identical cars in large numbers, and these are high-volume, low-mix lines, the total opposite of low-volume, high-mix for job shops. 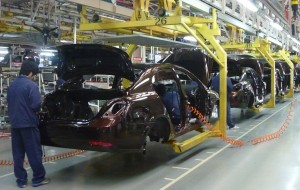 Nowadays, however, pretty much every car maker has a high mix of different customized products, aiming to customize the car for the buyer. For example, an Audi A6 has over 150 variants of the glove compartment alone, and 18 800 variants of the door cover. This is definitely a high-mix scenario. However, with one car per minute it is also still a high-volume production.

However, there are also low-quantity automobile manufacturers, too, for luxury and sports cars. The picture here is the Lotus final assembly line, which produces around four cars per day. Similar quantities can be found at Lamborghini or Ferrari, where the cars are also produced on assembly lines.

On a side note, every now and then there is an idea to reverse this. For example, Volvo experimented with group work instead of a flow line, first in Kalmar in 1984 and then in the Uddevalla plant in 1990. Volkswagen also tried it once. These ideas are usually abandoned after they find out that a flow line is just so much superior to other concepts.

Most commercial vehicles are also produced on assembly lines. Trucks, buses, tractors, excavators, you name it, they probably come from an assembly line. I have seen some of these lines myself. And they are also heavily customized high-mix, low-volume production.

Machine tools also often come from an assembly line. One example I am more familiar with is Trumpf (see my blog posts part 1 and part 2). They have converted their production to a flow shop, and believe me, this was not easy. But nowadays their highly customized and different machines move every eight hours on air cushions from one station to the next. A great example of a high-mix, low-volume production line.

Yet another example where I have spent more time on the production line was high-voltage breakers for power plants. They are also heavily customized and produced in small quantities. The sizes of these range from a large car to a small shed, and they are also heavily customized. Their change from job shop to flow shop was also difficult, and initially many doubted that it would ever work, because their products are “too special” and “too customized.” Well, it worked, much better than the job shop from before.

There are many more examples of using flow lines for high-mix, low-volume production, like marine engines for container ships, commercial diesel generators, medical devices, commercial boilers (one example where I was involved), robots, gas turbines and their maintenance, and many more.

For some of the above examples I know the details, and it was always a tough decision with lots of nay-sayers who doubted it. It also was never easy, and many smaller and larger problems had to be solved to make the flow shop come true. In hindsight, it always looks easy and doable. The true grit is to have the foresight and the vision to see the possibilities. Also, while I believe a flow shop to always be easier to manage than a job shop, there may be situations where a flow shop is not economically viable. Yet due to the enormous advantage of flow shops, this economic benefit is huge, but unfortunately hard to calculate beforehand.

I started this post because of a somewhat heated LinkedIn discussion. Will it satisfy these nay-sayers up? Probably not, and I already hear them stating that these examples are not high-mix enough; or not low-volume enough; or not detailed enough (to nitpick it apart to their liking); or that their case is totally different, or these are obvious (in hindsight); or they take parts of the post out of context, or, or…

Whatever. Besides, they are entitled to their opinion, and maybe I am wrong. I am also not saying all job shops must change to flow shops, but there is often a GARGANTUAN benefit that is vastly underestimated, and despite all the doubters, it is often worthwhile to change to a flow shop. In any case, if I get even one of you to wonder if you could change your job shop to a flow shop, then I am happy and it makes my writing worthwhile. Now, go out, see if you can change your job shop into a flow shop, and organize your industry!

11 thoughts on “Examples of Job Shop to Flow Shop Conversions”