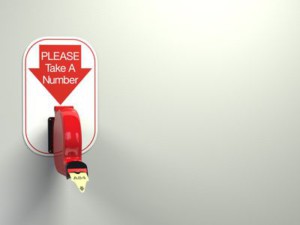 “Just in Sequence” (JIS) is a good way to supply material to high-mix, low-volume production. It combines well with “Just in Time” (JIT) and “Ship to Line” (STL), but neither are a prerequisite for Just in Sequence. In automotive it is sometimes also called In Line Vehicle Sequence (ILVS). In this series of posts I would like to talk about what Just in Sequence is, how it works, and what to be aware of. This first post details the basics of Just in Sequence production.

What Is Just in Sequence? 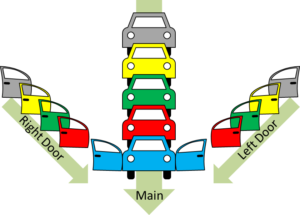 The basic idea is quite straightforward. Parts and components needed for production are delivered just in the sequence they are needed. Ideally, the person assembling the components does not have to choose from different parts, but merely picks the next part in the supply queue for assembly.

The prime example is (as often) in the automotive industry. Due to the large number of options in automotive, there is a low-volume, high-mix production where every car is different. Hence, the part type has to match the main product. This is commonly done for vehicle doors. Naturally, the color of the door has to match the color of the rest of the car. If the doors are supplied just in the right sequence, the worker simply has to mount the next door and everything will be fine.

On a side note, cars are usually painted together with their doors, but the doors are then removed again for ease of access for other assemblies. Only toward the end are the doors reinstalled. Hence, the doors in automotive merely have to maintain the sequence in which they are painted, which is together with the rest of the car body. Other examples of Just in Sequence are the seats, the dashboards, and many other parts of the car. In particular, the seats are often delivered from a nearby supplier just in sequence.

What Are the Alternatives? 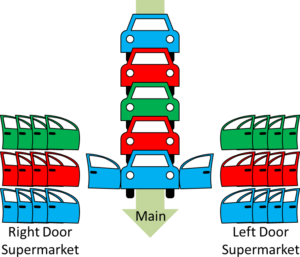 There are two possible alternatives to Just in Sequence. You could use a supermarket instead of a just in sequence delivery. However, this would work only if you have a limited number of variants.

The more variants you have, the more cumbersome it will be to have them all in the supermarket. Take again the car doors. Sure, there are some standard colors that are common, but there are also lots of other rarer colors. You cannot keep all colors in stock in a supermarket. Hence, this option works only for a combination or small number of variants and small physical part size. 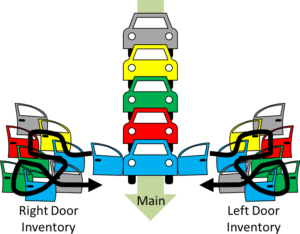 It is more common to have a larger (non-supermarket) inventory, and simply pick whatever part you need. This would work with both high-volume and low-volume components.

The inventory could have many parts of popular colors, and have the number of less popular colors that match the demand. On the downside, this approach may require quite a bit of walking and searching for the right part. But it works too.

Different Types of Just in Sequence

There are different ways to create a sequence.

One option is pick to sequence. This is pretty much the same as the large inventory mentioned above. You have an inventory, and a worker (or a computer system) picks the required parts from the inventory and creates a sequence. 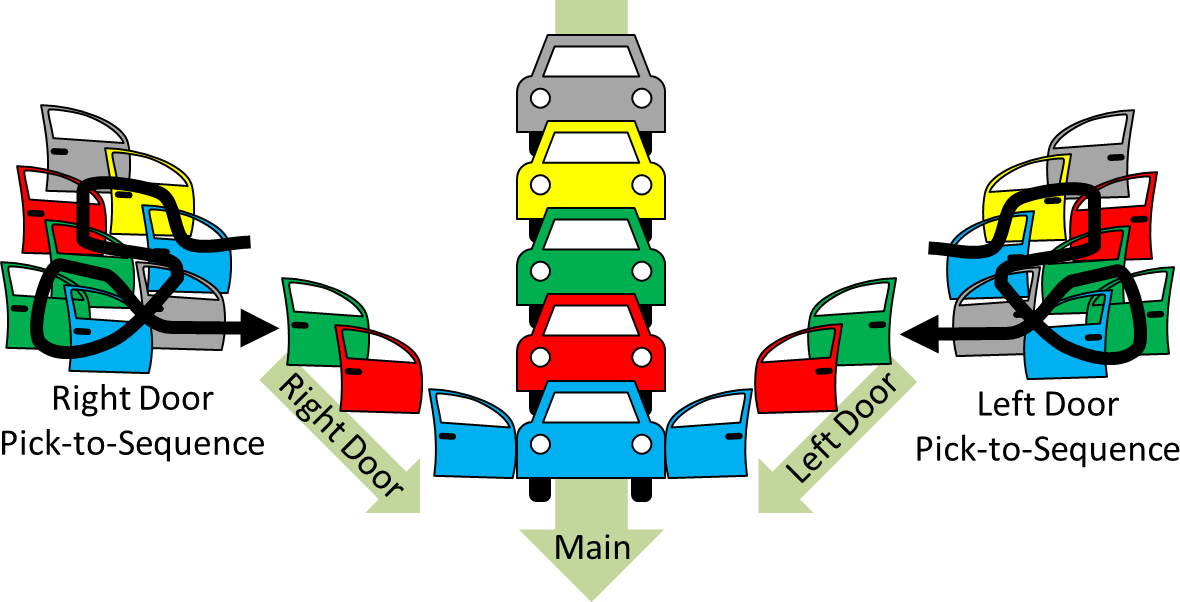 The worker (or computer) would need to know the sequence of production, and then simply select the matching parts for this sequence in the right order. Often, a small buffer is added between the picking and the actual assembly to reduce waiting times of both the pickers (if the main line is slower) and the main line (if the picker is slower). On the plus side, if you have the parts in the inventory, this approach is most flexible to adjust for short-term changes in the sequence.

It is also possible to have the products shipped in sequence. The supplier loads the part on the trucks in the right sequence, and drives the goods to the main line. There, the goods are unloaded and brought directly to the line, maintaining sequence all the way to the line. 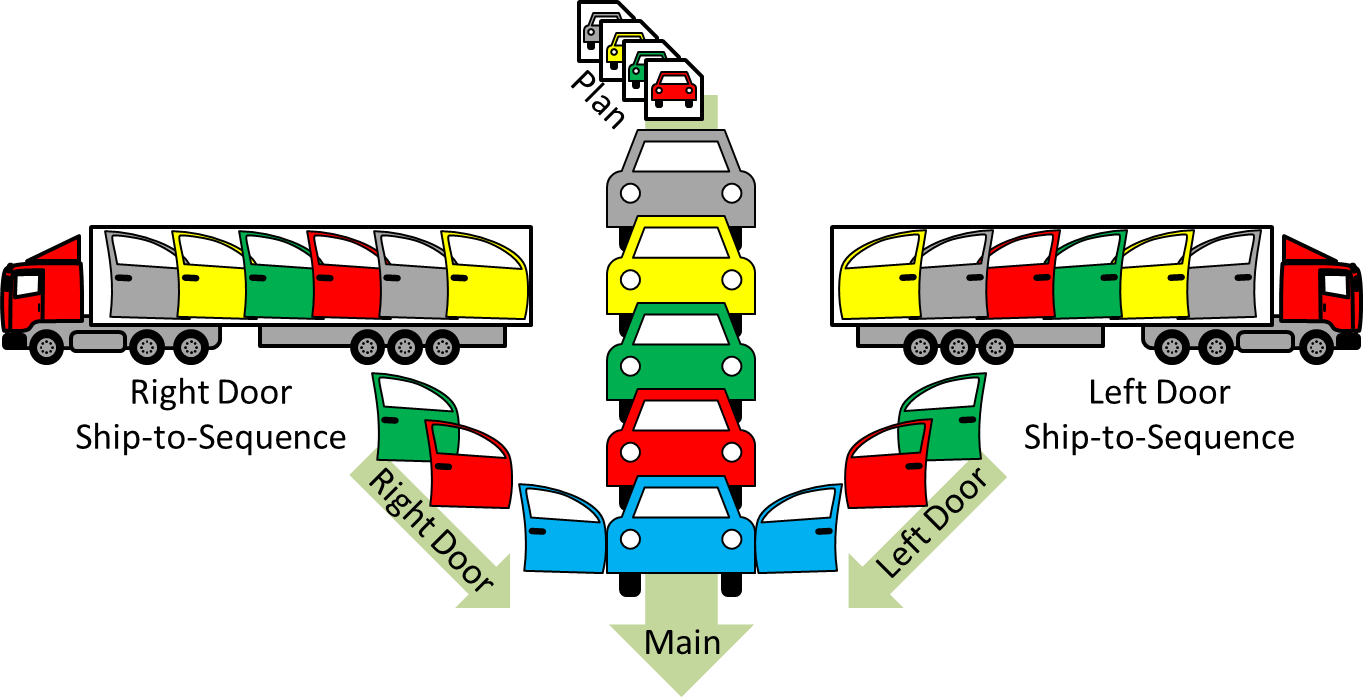 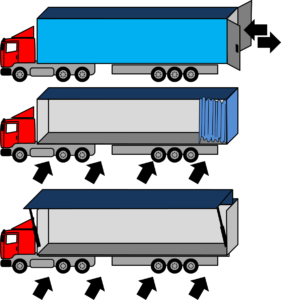 Please note that depending on the truck type, you may have to load the truck in reverse order, so that the part needed last is loaded first and stored in the very back of the truck. This is easier if you load the truck from the side.

Toyota (and other manufacturers in Japan) usually does this for its Japanese plants, using trucks that with the flick of a switch can fold up an entire side of the truck, giving quick access to the entire inventory. These are called gull wing trucks, as they look like the wings of a gull when open.  Since a lot of the structure is made from aluminum, they are usually a bit more expensive than normal trucks, but make unloading much faster and easier. The illustration shows a rear-loading truck, a side-loading curtain truck, and a side-loading truck where the entire side can flip open.

In all cases it is helpful if the parts that arrive are already in the packaging that is used within the plant. If you have to re-pack from, for example, standard pallets to blisters that are used at the line, you incur additional work that may not be needed. 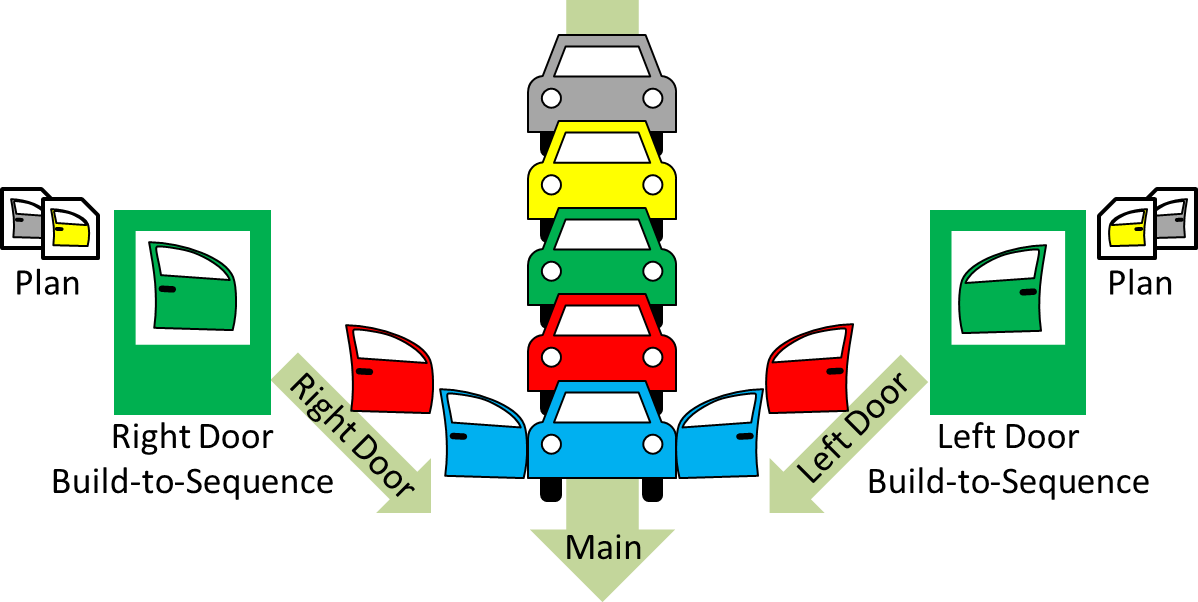 If you check the Wikipedia article on Just in Sequence, they claim (at the time of writing, July 2017) that Just in Sequence helps you to reduce inventory. This is basically correct. While you can keep a sequence even with loads of inventory; it will be quite difficult. Also, while Just in Sequence benefits from low inventories, it is not a primary cause of low inventories. It is not automatic, but with Just in time you may need less buffer inventory to handle the fluctuations in the demand.

There is also a second benefit of Just in Sequence, namely a reduction on handling. From the point of the creation of the sequence, you (ideally) never ever have to search for the right part again; you merely have to take the next part in sequence. This has benefits if you build to sequence right from the preceding process, as the entire material flow in between could be a simple FIFO lane.

Even if you merely pick to sequence for the final assembly, it has the benefit of keeping different works separate. The worker at the assembly line should assemble, not look for parts. By having another worker look for the parts (the picking process), both can work more efficiently.

Overall, Just in Sequence reduces the time needed to rearrange and coordinate material. The further back in the supply chain you can maintain a sequence, the more you can reduce searching and rearranging along the entire material stream. This reduced handling time as a side effect allows for a further reduction of material that is needed to cover this (now avoided) handling time.

I hope this introduction to Just in Sequence was helpful. In subsequent posts I will discuss more details on how and when to sequence, as well as how to deal with problems in the sequence. Until then, stay tuned, go out, and organize your industry!