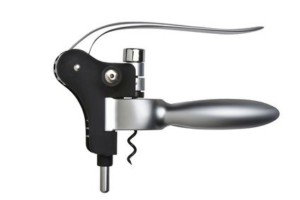 After an introduction and description of the fundamentals of karakuri kaizen,  here are some different karakuri kaizen examples for a wide variety of uses. Most of them are from the 480 exhibits at the the Karakuri Kaizen Exhibition 2017 in Nagoya, Japan; others are from the 2017 OPEXCON in Stuttgart, Germany. Here is my attempt of a structured overview, even though some of the points below may be overlapping.

There are a number of different uses for karakuri. In the West, it is most commonly associated with material transport, especially returning empty boxes in a rolling lane supermarket. Below is an example by ITEM displayed at the 2017 OPEXCON conference in Stuttgart.

One of the most impressive examples I have seen was a video from BMW in South Africa. There an AGV moved material around. The material was stored on rolling lanes on the AGV. The AGV supplied a supermarket next to  the assembly. Simply by driving slowly past the supermarket, different levers activated the material transport, and boxes with material moved from the AGV into the supermarket, while empty boxes moved back to the AGV. A rough sketch of the process is shown below.

Since I wrote the post, Johannes Schuch showed me some good videos in his comment below. Here is one that matches closely the BMW example:

Many of the karakuri exhibits aimed at reducing work duration. For example, on automotive assembly lines, operators often have a small cart with material and tools. These carts can be pushed along by hand, but it would be much easier if they move along the line by automatically. While this idea is not new, Toyota Motor Canada presented such a cart in a karakuri version for the mounting of the engine in the car. While moving forward, a weight is lifted. After one car is done, the weight is released and moves the cart back along the line to the next vehicle. They also incorporated a protective mechanism that covers the fender of the car while working and presents a tray with parts over the fender of the car within easier reach of the worker. Altogether they were able to eliminate eight steps per work cycle.

Another example helped with installing exhaust systems underneath cars. The device presented a new exhaust to the worker within easy reach, reducing both walking and lifting effort. This reduced the cycle time of the worker by four seconds, or roughly 7 percent overall, as well as eased the burden of the worker. 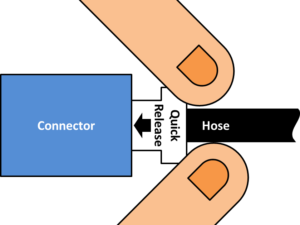 An exhibit by Aisin Takaoka simplified the removal of hoses. Thee plastic hoses were stuck in a connector. To remove them, the worker had to push a quick-release ring while pulling at the hose at the same time.

This happened in a cramped spot inside a larger machine, and the worker had to twist his fingers quite a bit to achieve that. Additionally, the small hose made it difficult to push the ring while pulling the hose.

After a few times, the fingers of the workers started to hurt (believe me, I tried it). To resolve this problem, the company created a special pair of pliers that fit into the tight spot. Simply by closing the pliers, a mechanism pushed onto the release ring while at the same time pulled the hose out. This special tool made it much easier and more comfortable to remove the hose, not to mention much faster.

Another example by Toyota Boshoshoku was during visual inspection of car bumpers.  These bumpers were originally on a rotating rack. Before, this meant that the worker had to walk back and forth to be close to the bumper for inspection. This is shown below in a top down view on the left side. The new karakuri device had a pin in a peanut shaped slot. This moved the bumper not in a circle, but in a “peanut shape”. As a result, the worker was always close to the bumper without moving back and forth. 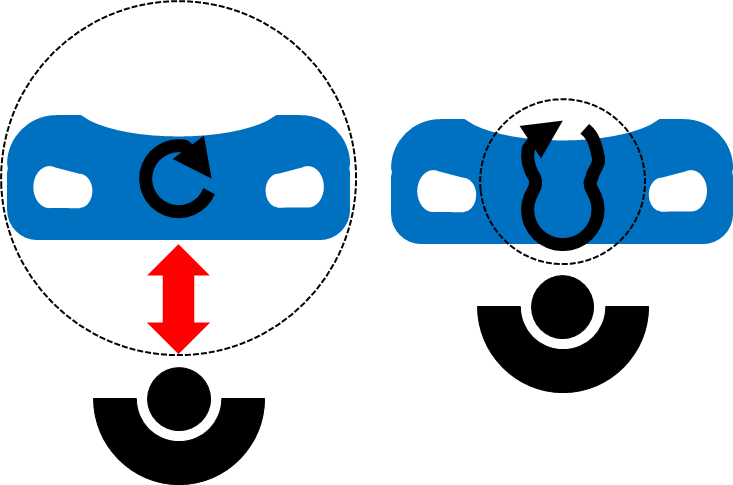 Many more examples helped with lifting heavy loads or raising parts so that the operator can take them without bending over. Others helped to get parts into tight spots.

Quite a few of the karakuri exhibits on display were used to arrange small parts for easier use by either machines or humans. The first example here is probably well known, being a popular example from Toyota.

Another example is for feeding a machine with oriented parts. The mechanism is so simple that you could argue that it is no mechanism at all, since it has no moving parts. Yet, it was at the karakuri exhibit, and hence is “karakuri”-enough for me.

The goal was to orient bolts where both ends were of a similar diameter, with one side only slightly larger than the other one.  Instead of using a complicated bowl feeder, they simply used a half-funnel-shaped metal slide. Since the larger diameter side of the bolt rolled faster, this end always came out first at the end of the funnel. 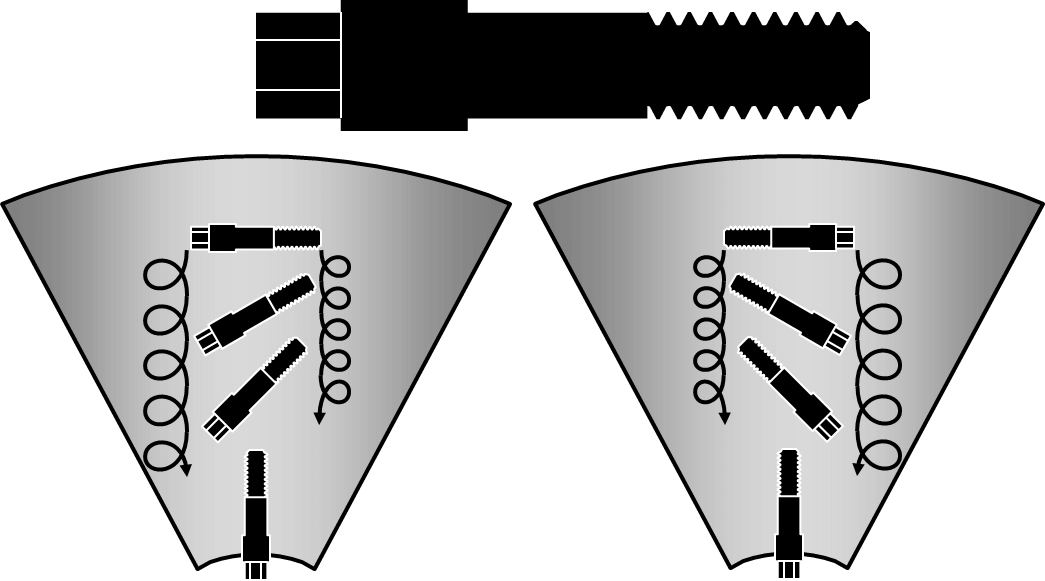 There were many more examples of bringing material in a good orientation for further use. In fact, this seems to have been one of the major uses at the karakuri exhibit.

Another advantage of a karakuri mechanism is that it can reduce the overall cost. A conventional machine with computers, sensors, and actuators can be rather expensive. Depending on the situation, a karakuri machine can be much cheaper.

Toyota Boshoku built a karakuri parts feeder that oriented the parts. They used a pendulum that stored power and allowed the mechanism to operate for a few seconds without additional power. This machine cost the company 50,000¥ (roughly US $500). They estimate that a conventional computer controlled machine would have cost them 1 million ¥ (roughly US $10,000).

Denso showed an exhibit where they improved product quality. They transported a tray with around one hundred small and very delicate parts using an AGV. However, the route of the AGV was not perfectly smooth, and uneven surfaces like manhole covers bumped the AGV. This was enough to create an (occasional) issue for the parts, which got bumped too. Hence, they upgraded the pallet storage on top of the AGV to include a combination of suspension, x/y isolation, and damping system. As a result, even when the AGV ran over uneven surfaces, the parts did not shake. Not only did the quality of the parts improve afterward, but the AGV was also able to drive faster, reducing one minute of the turnaround time for the transport.

Another device by Toyota Motor Japan was a system that cleaned the rollers of a rolling lane automatically. This eliminated metal chips that sometimes scratched the parts. It saved around twelve hours of manual cleaning per month, as well as around US $500 in damage costs.

Another device by Daihatsu helped with inspection of valve seats, where an endoscope-style camera had to be inserted into around fifteen holes of a device. The karakuri gadget made sure no valve seat was forgotten, and also eased the use of inspection.

Not many but a few of the exhibits improved safety. Toyota Motor Japan displayed a device that was incorporated in a winch hoisting forty-kilo items. They worried what would happen if the chain lifting the weight broke or otherwise failed. Hence they included a safety stop that actuates when the chain snaps. By itself nothing new (similar devices are long since standard in elevators), but in this application it was for a much smaller device.

Another example by Aisin Seiki provided pallet storage with a gate. The idea was that pallets won’t fall out during an earthquake. The weight of the pallet closes the gate when the forklift puts the pallet down. If the forklift lifts the pallet up again, the gate will swing open. (Side note: Their video of the warehouse had only one such gated pallet storage, and upon my inquiry they commented that it may be a bit expensive. I guess this is not yet widely in use.)

Karakuri can also be used for visual management. Any type of gadget that visualizes the state of a device can help here. In its simplest case, this would be strips of plastic on a fan or air conditioner.

Other examples were a ball in a plastic tube to monitor flow, red and green coloring on dolly wheel locks, or a red sign that pops up when a valve is opened.

Wow, that blog post took me much longer to write than expected. It isn’t easy going through almost five hundred examples with (mostly) Japanese descriptions to pick some interesting ones for you. In any case, I am confident that there was something in here that inspired you. But inspiration alone is not enough. Let the actions follow. Hence, go out,  use mechanics to make something easier, faster, safer, cheaper, or more visual, and organize your industry!