Overall, it is hard to say how beneficial a reduction in fluctuations will be, but it will be beneficial. Hence, reducing fluctuations is an very important but underrated aspect of lean manufacturing.

For one, your production system is not balanced perfectly, and some processes are needed more than others. It is absolutely normal and okay for non-bottlenecks to have less than 100% utilization. Even bottlenecks have less than 100%, since the bottlenecks usually shift. It also depends on how you measure utilization. Is it the percentage of the time a machine is scheduled for production? Or is it the ratio of the actually produced good parts to the maximum number of parts that could theoretically have been produced in the same time? This is better known as the OEE. Aiming for a 100% OEE is unrealistic (unless the number is fudged, and I have seen plenty of OEE claimed to be above 100%). Just as a reference, Toyota aims for around 90% OEE.

In any case, a utilization of less than 100% gives you a capacity buffer to handle fluctuations. You could also use inventory to decouple fluctuations. However, a capacity buffer does not increase your lead time, whereas inventory does. On the downside, a capacity buffer with workers and machines waiting for parts costs you too. The question is a trade-off between unused capacity and additional inventory. Furthermore, this trade-off is not linear as shown in this graph based on the Kingman equation. The closer you get to 100% utilization, the more inventory you need to cover even the smallest fluctuations. For an utilization of 100% you need – in theory – an infinite inventory. Please note that the graph measures only the waiting time for a simplified system with one queue and one process, but similar behavior can also be found in more complex systems.

The Kingman equation gives a nice relation between utilization and lead time. But again, the Kingman equation is a simplified model of the real world. Regarding utilization, it assumes a round-the-clock non-stop working system. Such systems exist in reality. However, most systems do not work twenty-four hours a day seven days a week. Instead, you may have one shift or two shifts four, five, or six days per week. This gives you another way to use capacity for handling fluctuations, namely with overtime. Overtime where you call people in when you need them is cheaper than having them waiting around if there is no work. On the downside, overtime requires a bit of preparation, and hence can cover medium- or longer-term fluctuations like seasonality. Overtime can also handle fluctuations whose short-term effects were buffered by inventory. If you see your buffer inventory going down, you may schedule overtime. 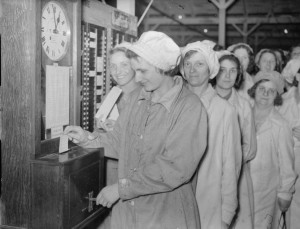 P.S.: This series of posts is based on an inspiration by Rajan Suri, and also chapter 7 of his book Quick Response Manufacturing and chapter 3 from his book It’s About Time.