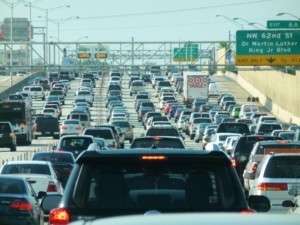 In lean, the concept of “flow” is important. But what is it? In this post I would like to look deeper into this important concept using another flow we are all (much too) familiar with: traffic flow! 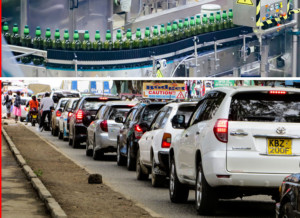 There are a lot of similarities between material flow and traffic flow. Both parts and cars have to go from one location to another, because the parts or the passengers are needed somewhere else.

Usually, this travel is a waste and should be avoided, or at least reduced. Most people usually don’t take the scenic route on their daily commute. The critical factors are a combination of time and cost, where less is better in both cases. With traffic, drivers want to spend little time in traffic but sometimes also want to avoid toll roads. Same with material. It should arrive fast, but air mail may be too expensive depending on the circumstances. 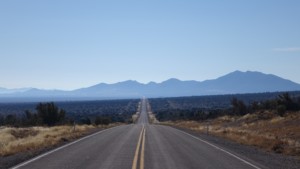 These travel times fluctuate. Sometimes the roads are free, but sometimes there is a traffic jam or another type of gridlock. Parts may arrive quickly, or are sometimes a bit delayed. For material flow this can happen both between factories (where we often have road transport, i.e., traffic again) or within the factories. Hence, the travel time fluctuates. Often, however, it is important for both the parts and the vehicles to be at a certain location at a certain time. Being too late is not good. Material that arrives too late often causes other delays. People who arrive too late may miss a connecting train or be late for an appointment. Hence, there is often a time buffer. Both parts and people are planned to arrive early to ensure that they are not late. The earlier they are, the less likely they will be late. At the same time, parts and even more so people don’t want to sit around for a long time until they are needed. Hence, you need a trade-off between ensuring being on time and not waiting around for too long.

There may also sometimes be mistakes. A wrong part may be delivered to the wrong location. I once drove two hours in the wrong direction since there were two towns of the same name. (Luckily, since it was a mini one-day holiday, we just enjoyed the other town, which was also nice). Maybe you went out to an appointment only to learn that the appointment was yesterday. Similar does happen with parts. Overall, there are a lot of similarities between traffic with people and transport of material. 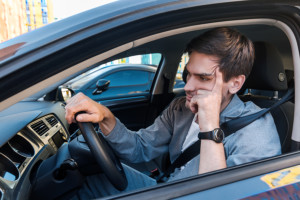 However, there are also some differences. Probably the biggest one is that we have our own will, and we care a lot about wasting time in traffic. Parts, on the other hand, do not care. Not at all. A part does not mind sitting in a warehouse for three years; a person, on the other hand, would mind quite a lot. Perhaps you’ve had kids in the back seat asking every five minutes, “Are we there yet?”

As an effect, a person will try to improve the situation. If there is a road closure, the person will try to reroute to reduce the additional delay due to the closure. A part will wait stoically forever. To improve the flow of parts, some overarching entity (a person in logistics or similar) needs to take care of the material flow. Traffic is mostly self-organizing. The government provides the roads and other infrastructure like bridges, and the traffic will organize itself using the available infrastructure. (Although, admittedly, sometimes the infrastructure could use an overhaul. Complaining about bad roads and bridges is popular in many countries.)

How to Reduce Traffic or Material Flow (In Other Words, How NOT to Do It)

Before I talk about how to improve the situation, just for fun, let’s talk about how we can make it worse. I DO NOT want to make it worse, but sometimes you can get good insights from such a thought experiment (sometimes called reverse brainstorming, or negation). The obvious is to take away infrastructure. If roads and bridges are closed, traffic will take longer. That is obvious, and probably not a great insight.

However, traffic will also get worse if a lot of vehicles are on the road at the same time. During rush hour, the infrastructure is hard pressed to handle the traffic, and a 15-minute drive can turn into a 45-minute torture quickly. This is not obvious in material flows, but also true. If you have too much material en route at the same time, it may overload the corresponding infrastructure for transporting and handling the material.

Another not-obvious analogy is increasing fluctuations. Watch the red cars in the video below (with thanks to Florian Palatini for his LinkedIn post on “What causes Traffic Jams“). One vehicle frequently overtaking and merging to become faster may slow everything else down, possibly even a lot more. It may not be obvious, but this also applies to material flow. Naturally, prioritizing one part over another accelerates one part, but increases delay for the other one. However, due to the additional effort in changing the sequence, the delay may be bigger than expected, and the average speed of all parts goes down.

The last way to reduce flow is to ignore rules. The more people ignore traffic rules, the more chaotic it will be, and the more fluctuations will increase. Some vehicles may not arrive at all due to accidents. If you really want to mess up our traffic, make all rules of the road optional. (Okay, please don’t! This is only a reverse brainstorming example.)

How to Improve Material Flow 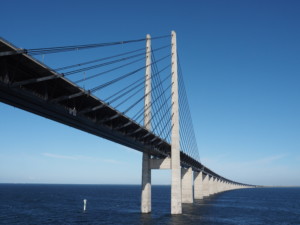 So how do you improve flow? You should strive to have a fast transfer time (both people or parts) and also reduce fluctuations. You can probably get the largest improvement by providing AND maintaining infrastructure–although this may also be the costliest approach. Make sure you have proper space and tools for handling the material flow, and that they are in good working condition.

The same with prioritization. While you may need to prioritize some parts sometimes, know that this will increase the chaos and increase the fluctuations for the other parts, potentially even much more than you expect.

Finally, have good standards that are used (the “rules of the road,” if you will). This greatly helps with consistency and reducing fluctuations, allowing you to have shorter AND less fluctuating material flow delays. Overall, while the analogy is not perfect, I think there are quite some learnings we can take from traffic flow and apply it to material flow. Now, go out, get your parts flowing consistently, and organize your industry!

P.S.: This blog post was inspired by a post by Florian Palatini on “What Causes Traffic Jams.” Many thanks, Florian!

4 thoughts on “Material Flow and Traffic Flow – An Analogy”