Production lines with a product mix may have different workloads at different stations for different products. This can cause waste. In this third post in the series I will look at options on how to adjust the available capacity to ease this problem. In my next post I will look at Mixed Model Sequencing to adjust workload differences.

In its ideal form, adjusting capacity would mean to add one (or more) workers whenever a part with more work comes along, and remove them again once a part with less work comes along. For the example of an automotive assembly line with two-door and four-door vehicles, this could look like the animation below. A worker magically pops up whenever there is a four-door assembly, and disappears again if there is a two-door assembly.

You probably can already see the problem here. It will be extremely difficult to manage the worker’s workload. It will be very difficult to give the worker something else to manage. You (usually) just can’t conjure some capacity out of thin air at a moment’s notice. In the following I will show you some ideas how you still could manage.

Find Another Task to Fill the Capacity

It is possible to have a second worker at the critical station, as shown in the animation above. This worker can help if there is a part that requires more work (i.e., a four-door car). The challenge is to not waste this worker’s time if a part requires less work (i.e., a two-door car).

You would have to find an useful task for the extra worker that he can do in the available time. This is usually not easy, or even impossible. If the worker is busy with four-door cars, the other task would have to wait. Hence, the other task must be a job that can wait anytime. The other job would also be something that can be dropped anytime, since the door assembly can NOT wait. Whenever a four-door car comes along, the worker must go to assemble doors. If you can find such a task, then this may be possible. 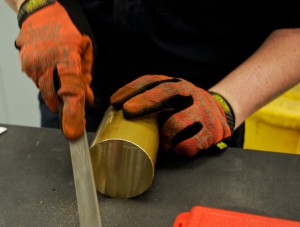 For example, you may have a box of sheet metal parts that need to be deburred. The additional worker deburs these items until he is needed at the assembly line, in which case he can just drop the part and continue later.

Even then, frequently interrupted work is a much less efficient work. In the worst case the worker may get confused and think he already did a secondary task, but in reality he did not yet do it. Subsequently a not-completed item from the second task is moved forward. For example, you can easily imagine a half-deburred part mistaken for a completely deburred part.

It will be easier if there is a longer time between parts, either due to a larger cycle time or due to infrequent larger products on the main line (i.e., four-door vehicles would be rare). In this case there will be less interruptions. Nevertheless, this solution is rarely feasible and usually not worth the effort.

Another option is to make larger batches – and let me just say right at the beginning that I don’t like large batches! A smaller batch size is usually much more efficient, and increasing batch sizes is usually the wrong way. The vision of lean is a lot size of one, or a one-piece flow. Never lose sight of that!

This being said, you could make larger batches, which gives you more time to move workers around. In the extreme this could be a different product type every shift. For example, you could do one shift of only two-door cars, and man the door assembly workstation with only one worker. In the next shift you produce only four-door cars, and man the workstation with two workers.

But again, if you choose this path you are walking in the wrong direction. For example, the supply lines that create your doors would be totally overloaded during a four-door shift, and would twiddle their thumbs during a two-door shift. You could improve this by having a larger buffer of doors waiting for assembly, but then increasing inventory is also not good. Overall, this option should be avoided due to all the negative consequences. It is quite likely to be penny wise but pound foolish.

The whole problem of different workloads disappears if your workers have a flexible work assignment (i.e., the worker can take however long it takes to do a task before moving to the next task). Job shops would be one example, although job shops are usually inferior to flow lines. Other options are related to work cells. 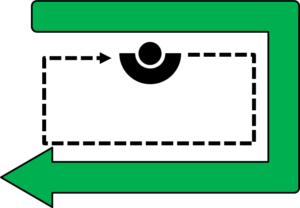 If one person does the entire job within a small manufacturing line (commonly called a work cell, although this term is used often also in different contexts), differences in workload content are not a problem. The worker just takes as much time as is needed, and the part is completed accordingly. A two-door vehicle without sunroof would be finished faster, whereas a four-door vehicle with a sunroof would be finished later. The differences in work content merely change the rate at which parts are completed.

One such line layout is the bucket brigade (also known as bump-back or bouncing line). The worker moves along the line with his part, until he meets the next worker coming back without a part. He then gives the part to the next worker who moves the part forward along the process. The first worker then walks back until he meets the preceding worker to take the part or to get a new part at the beginning of the line. This way the capacity of the line is self-adjusting to the workload, and the workers utilization is easier to manage.

On the other hand, there are also some requirements for this to work. For example, all workers need to be trained at all stations, and it works best for shorter cycle times. For more details, check my series of two posts on the bucket brigade, with Part 1 here and Part 2 here.

Another option is the rabbit chase. A small number of workers, ideally in an U line, process an entire part from beginning to the end. Different work content and hence different speeds of the workers are buffered through the distance between the workers. Here, too, some restrictions apply similar to the bucket brigade. For more details, see my post on the rabbit chase.

Overall, the idea of adjusting capacity may sometimes work, but for many cases it is not so hot. There may also be the risk of “forgetting” a task that leads to an incomplete product. Especially for large and complex lines, a better way to manage different workloads is the sequencing of the products. I will talk more about this in the next post. Until then, stay tuned, go out, and organize your industry!

Here is also the Sequencing Example Excel File for posts 7 to 11 with the complex example. Please note that this is not a tool, but merely some of my calculations for your information.