This last post of my series looks at fluctuations that originate downstream from your location. In other words, how to reduce fluctuations originating from your customer. Granted, this often is the most difficult one, as you usually have not so much influence over your customers (unless you have a monopoly). Let’s have a look.

Again following the source-make-deliver structure, we now look at “deliver.” This is your customer. It may be the end customer; however, it could also be simply the next stage in the value stream, which again is your customer.

As always, there is the possibility to decouple using buffer inventories. Or you could adjust the capacity to better match the customer demand. However, these two approaches address only the symptoms and not the cause of the fluctuations. 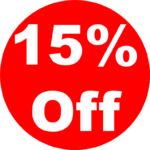 One popular method is a sales promotion. You reduce the price to increase sales. Similarly, you could also increase the price to reduce sales. By adjusting the price, you can change the customer behavior. However, this also affects profit. Maybe you sell more items but with lower profit, or less items but with higher profit, in any case it has an influence on the profit. If it helps you to make more profit, then you should have done this already just for the money. If it reduces profit, you have to be careful that the cure of lower profit is not worse than the disease of less fluctuations.

A similar approach that keeps the price stable is a marketing campaign. You do not change the price, but merely motivate more people to buy your stuff. But be aware that marketing is a bit of a magic black box that does not always work.

These approaches have some delay between the implementation and the change in the behavior. Hence, it is more for longer-term fluctuations. It is also helpful if you can predict a change in demand beforehand. A key example is seasonality, but it may also be an upcoming legal change, or an increase or decrease in the sales tax. In any case, by carefully adjusting these levers, you may be able to reduce the magnitude of fluctuations.

This does require coordination between sales on one side and production and/or logistics on the other side. I was on the receiving end of a very successful sales and promotion campaign that hit my shop floor with increased orders when we were not even able to satisfy the initial demand. It increased the fluctuation and led to many delayed deliveries, but sales looked good because they sold stuff. Anyway, poor coordination can lead this to backfire.

Another example to counteract fluctuations is to expand markets. This can work in multiple ways. In general, the larger the sales volume, the smaller the fluctuations compared to the sales volume. Hence, if you sell more, your fluctuations grow slower than the output. And, management usually does not mind if the profit grows along with the increased sales.

If it is a seasonal fluctuation that you want to reduce, you should try to expand into new markets that have an anti-cyclic behavior. Skiing gear usually is highly seasonal, but in Australia the skiing season is July and August. Unfortunately, there are only 25 million people in Australia, plus another 5 millioon in New Zealand. Don’t you wish Australia and New Zealand would have more people?

There may also be a possibility to introduce new products that have an anti-cyclic seasonal behavior. If you are making ski sticks, consider expanding into hiking sticks. The whole idea of Nordic Walking originated from the desire to have a product that you can sell in summer. 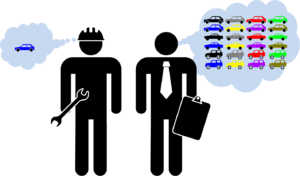 Another option is to reduce product variants. This may be confusing, since the previous suggestion was to add new product variants. However, the additional variants were for anticyclic markets. The reduced variants are for the “normal” market.

Second, it means less components and products to track. You also get higher demands for fewer components. A common example is cars. If you buy a Toyota, there are a few model variants, with few options. Most Western car makers have many more options, which increase the fluctuations and subsequently the overall cost. An Audi A6 has over 150 variants for the glove compartment alone, and 18,800 variants for the door cover. Think of the logistic nightmare of having 150 different glove compartments for the same car! Reducing some of these variants will have a lot of benefit, one of which is the reduction of fluctuations.

Be aware that you may face a lot of resistance from sales and management in general when you want to reduce product variants. Their argument is that having more different products allows you to capture more market niches. They are, of course, also correct. Normally you would do a cost-benefit analysis, but in this case there is probably no hard data neither for the extra market niche nor for the reduction in fluctuation. Such situations where you have to argue based on opinions rather than facts can quickly get messy.

So, as you can see, there are some options for reducing fluctuations on the customer side. Of course, these require effort and may also cost some money. You have to decide which one is worth the cost. Also, I never said it is easy. Overall, it may be easier and better to start reducing fluctuations with “source” or “make” rather than “deliver.” Nevertheless, I hope this gave you some inspiration. If I forgot anything that you think can also help, please let me know. Now, go out, reduce your fluctuations, streamline your system, and organize your industry!