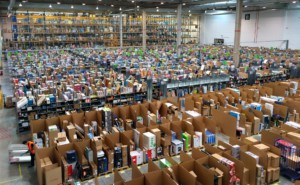 In my last post I looked at the disadvantages of fixed location storage. Usually much better is random chaotic storage. This is, for example, the preferred method of Amazon. This approach makes best use of the available space and generates less mistakes. When Amazon started using this, they reportedly were able to store twice as many items in the same space as as before.

Random Chaotic … Meaning the Closest One for the Stowing Operator 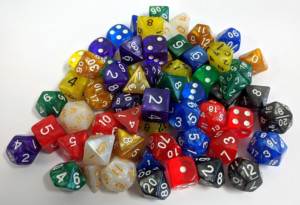 The complete opposite of fixed location is a random chaotic storage. Any item can be anywhere. This sounds easy, doesn’t it? Well, the challenge is to keep track of it. Forget pen and paper, forget Excel sheets. Now you definitely need a dedicated inventory management software. On the plus side, this random chaotic storage makes much better use of your space than fixed location storage, as I explained in my last post. Also, the same part type may be stored in different locations. This may go against your sense of order, but is part of the method.

Of course, it is usually not truly random. I do not know of any system where a computer uses a random number generator to assign a truly random slot in the warehouse. What random chaotic usually means is that the worker who places the item in storage picks the spot. Hence, random chaotic actually is the closest free spot the operator can find. That is okay. Even better, that is actually good. Random chaotic reduces the walking distance of the operator who places the items. If the operator can pick the spot, then you also avoid problems if the spot is already taken. If a computer assigns a spot, then every now and then, due to errors, the spot may be already taken by something that should not be there.

Just make sure the operator correctly records the location and quantity of the items, preferably digitally with a scanner or a similar mistake-proof device. Ideally there should be three quick tasks for the operator: scan the item, scan the location, and place it in the location. Random chaotic has quite a few benefits, and is often considered a good inventory management approach.

On the downside, it requires a good computerized inventory management system. If the system is down, so is your factory, since you won’t be finding anything without the system. Also, if you need more than one part of the same type, you may have to walk to different locations until you have gathered enough of these parts (Thanks to Michel Baudin for the Suggestion!). But performance wise, this approach is very good. This is also the system Amazon uses for its fulfillment centers.

Having individually assigned location is a whole group of storage strategies. You do not have a fixed location that does not change, and neither does the operator decide the location for you as in random chaotic storage. Instead, some sort of algorithm decides on a case-by-case basis which part is stored where. The stowing operator is informed where he has to place the item. The advantage is that the inventory locations can be optimized more, but the operator now has to search for the correct location, which takes time and introduces more potential for errors. The best known approach is probably ABC storage. 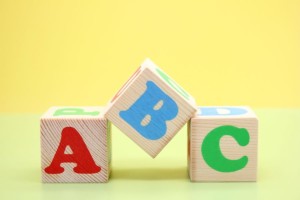 The idea is to put the A parts in an easy-to-access location, the C parts in the farthest-away locations in the back, and the B parts somewhere in between. Then the worker or device that retrieves the items has to walk less, since the most frequent items are nearest to the point of demand.

Here, too, you can have variants. Generally, ABC sorting is by the frequency of retrievals, since you usually stow large batches and then retrieve multiple times in smaller batches. However, if your system stores more frequently than it retrieves (i.e., smaller outputs are added to a bigger batch, which is then shipped) you may sort by the frequency of storage operations. You can also imagine a combined value of both storing and retrieving, which should give you a good compromise.

Other criteria may be a bit more cumbersome but also possible. For example, you may opt to store large or heavy items in the front, rather than navigating through a maze of shelves.

Typically, three categories in ABC are used. However, feel free to use only two if you like; the result won’t be too much different. You could also go to the other end and use a gradient. The computer determines the retrieval (and/or storage) frequency, and then calculates how deep in the warehouse it should be stored. The computer then picks the closest free location, giving you a smidge more performance, but it will keep a programmer busy for a bit.

You could even go a bit further and consider which parts are used where. If you have one production line on one side of the warehouse, and another on the other side, you may have separate ABC categories for the different lines. The parts frequently needed by a line are stored closer to that line than to the other line that does not need them. But, while this sounds cool in theory, please be aware that this will be very tough to implement and debug, giving your shop floor people a lot of headaches while the computer guys try to figure out all the bugs. Even with computers, it may be best to keep it simple.

In my next post I will look a bit at combinations and variations of fixed location, random chaotic, and individually assigned locations. Until then, stay tuned, and go out and organize your industry!