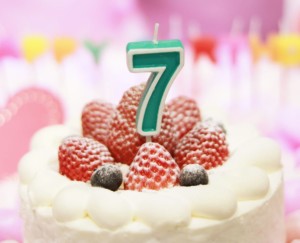 Today, AllAboutLean.com turns seven years old. Hurray! Amazing how fast time flies. Time to look back again on what happened. This is my 370th post on this blog. For seven years I have published a blog post every week going into the details of lean manufacturing and related topics (and once per year a birthday celebration post).

It was exactly 100 years ago today that Frederick Winslow Taylor died. He is considered the father of modern scientific management, the first management consultant, president of the ASME, and the first management guru. He invented and patented the first modern tool steel, designed new golf clubs, and optimized the growing of grass. He could swear like few others, but he also won the US Open tennis championships.

His work was already controversial when he died, but nobody doubts the enormous legacy he has left for industry. Without his achievements, there would be no modern manufacturing.