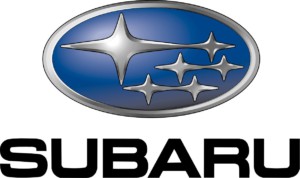 Subaru is actually a subdivision of Fuji Heavy Industries, only recently (2016) renamed to Subaru Corporation. They make all kinds of aircraft, vehicles (including Subaru), pumps, generators, wind turbines, and more. The group originates from the first aircraft maker in Japan, founded in 1918.

The name “Subaru” comes from the Japanese word subaru (昴) for the Pleiades star cluster. The constellation also inspired the logo of Subaru. 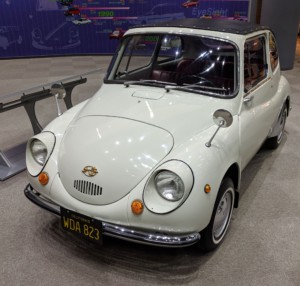 General Motors took over the shares from Nissan between 1999 and 2005. Toyota started to buy shares of Subaru, currently owning 16.5% of Subaru. Together they developed the Toyota 86, sold as Subaru BRZ or Toyota 86 (GT86 and FT86). 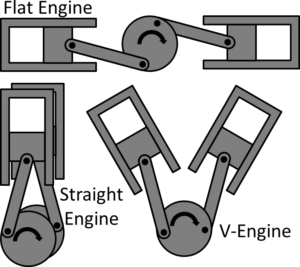 Engineering wise, Subaru differs quite a bit from most other car makers. Since 1966 they have almost always used a flat engine instead of a straight engine or a V engine. This gives Subaru cars a quite low center of gravity. They also make the only flat-engine diesel in the world. Since 1972 they have also produced almost exclusively four-wheel-drives (what they call all-wheel-drive since all wheels are powered all the time).  Many cars also have a gear box that can drive the wheels slower than the engine (a step-down gear), useful for very rough terrain.

The company is rather small for a car maker, but has found its niche with its technical aspects. Also surprising is that despite their small size, they are highly profitable, making 282 billion yen net income on 3,325 billion yen revenue, or over 8%. They also make most of the cars for the world market within their plants in Japan, rather than having a plant abroad. They only have one plant outside of Japan, in Lafayette, Indiana, USA.

Most manufacturing at Subaru happens within a short radius around their main plant in Gunma Prefecture. They have a total of four plants within short driving distance: the main plant (Honkojo) along with the Yajima and North Plant for cars, and the Oizumi plant for engines. A one-hour drive away is the Kitamoto plant and a test and development center.

Overall, they seem to centralize most production close to their main plant, similar to Toyota in the past in Toyota City. Nowadays, however, Toyota has many more plants all over the world.

Nissan was recently in the news with a small scandal where the final inspection was done by workers that did not have the official government certificate to do the inspection. Less well known is that Subaru apparently did the very same thing.

The main plant itself was unimpressive. It is a typical automotive plant. While the floor was clean, there was a lot of dirt on all the overhead pipes and struts. The area where they tested the final cars had a distinct smell of exhaust gas, despite some ventilation system. Fine for me as a visitor, but not nice if you have to work there every day.

They did have, however, the longest shifts of any plant I visited. They work in two shifts, from 6:30–16:45 and 16:45–2:30. Hence there are over ten hours between the beginning and the end of the first shift. Despite their long hours, they have a four-hour gap at the dead of the night, allowing their employees to catch at least some sleep (similar to Toyota, but unlike Mazda or Nissan, where their workers are working at 4:00 a.m.). Similar to other Japanese automotive plants, they have a paltry 2% female workers.

The information flow is not quite as good as I would like it to be. There were only a few small andon boards. Unlike many other plants, the worker also does not have the power to stop the line. If there is a problem at Toyota, they would pull the andon cord to stop the line. At Subaru, I have been told that if there is a problem, the worker has to make a call to a supervisor before the line gets shut down. I would guess that as a result, the workers are much more hesitant to escalate an issue, and more issues may simply be put down the line. Hence it is a bit surprising to me that Subaru enjoys a good reputation for quality.

The tour guide also was not quite sure what kanban are (although, as in many plants, the guide was a lady specializing more in PR than in engineering). As in most other plants, they use pick-by-light for kitting.

The plant had a total of two assembly lines in the plant, with takt times of 62.4 and 70.8 seconds. I saw the faster one. With the material flow, I noticed that there is quite a bit more material at the sidelines of the assembly lines than at Toyota. I did some counting at the stamping shop, and saw about two days’ worth of stamped side panels, which is okay.

They use mechanical lifting devices to lift tires up for assembly, but still use a hand tool to put in the bolts, which afterwards get tightened with an automatic tool. The flexible assembly line doesn’t need batches and can make cars in any order. They did seem to optimize the color sequence, however, as I frequently saw two or three cars with the same color in sequence.

As usual I measured the efficiency of the assembly line workers by counting how many people were adding value when I saw them and how many did not. Here, Subaru turned out to be the bottom of the barrel when I observed them. Their door subassembly line workers used their time well only 42% of the time, and the final assembly was only marginally better with 46% of the time adding value. This is much lower than Toyota or Nissan, and is actually comparable to truck assembly lines with much slower takt times and much more custom-made products. 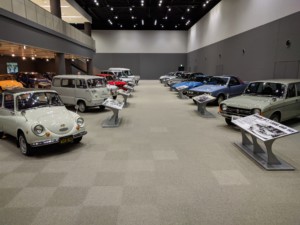 You can apply to their factory tours online through their website, but both the application and the tour is in Japanese. The visit is for their main plant at 1-1 Shoyacho, Ota, Gunma Prefecture 373-0822, Japan. The tour shows you their exhibition hall with many Subaru models and its history.

The tour itself goes on overhead walkways through a part of the main assembly line. It also visits the stamping shop, which actually few other tours do, and the body welding. At the welding shop you get a very good view of the door welding process. I would like to thank Subaru for offering these free tours!

Overall, I enjoyed the visit, even though there seems to be much potential for improvement. This was the last car maker on the list of my grand tour of Japanese automotive during my sabbatical in winter 2017/18. But I will definitely visit more plants in the future, and maybe have an even closer look at Nissan, whose recent efficiency seems to outperform Toyota. I will definitely keep you posted if I learn more about Japanese car makers. I also hope that this grand tour was of interest to you, regardless if you make cars or not, and gave you some ideas or inspiration to go out and organize your industry!

7 thoughts on “The Grand Tour of Japanese Automotive – Subaru”