As part of our Van of Nerds tour through France, we also visited two research laboratories. While not shop floors, these are the places to experiment with new technologies.

The Campus Fab in Bondoufle near Paris is an innovative demonstration lab with lots of fancy technology to showcase Industry 4.0, including advanced machining, additive manufacturing, assembly, equipment maintenance, and process data analysis/control. It is financed through a mix of private- and public-sector companies, including Dassault, Safran, ABB, Kuka, DMG Mori, and more to enable a “digital continuity” across the value chain. The concept originated in 2016, and it started operating in 2019… and then came the COVID pandemic. But they recovered and are now operating as planned. They have three main goals of 1) training technicians for Industry 4.0; 2) onboarding new employees of the partner companies; and 3) providing specific training in focus technologies. They also aim to get young people interested in a career in manufacturing by showing them what is possible nowadays in manufacturing. They have regular buses of high school students arriving and spending a day in the campus fab, and have shown the technologies to over 1000 students so far.

The site contains a nice assortment of technologies, including 3D printing (laser sintering of plastics), AGVs, different milling machines, digital twins, Cobots, and more. There are a few pictures below.

A few of these technologies I would like to talk about a bit more since I found them interesting. For example, I liked the AbsoluteArm (photo above) for measuring parts, which I found easy to use.

One of the most impressive things for me was their usage of augmented reality. Below you see a monitor with a disassembled aircraft engine. Overlapping are the instruction steps for assembling the engine. The operators need to go through these steps one by one, and acknowledge the completion of each step. This helps them to not only not forget a step, but it also creates traceability, which is very important in aircraft building and maintenance. At first glance, this monitor looks just like a fancy PowerPoint. However, it is not. 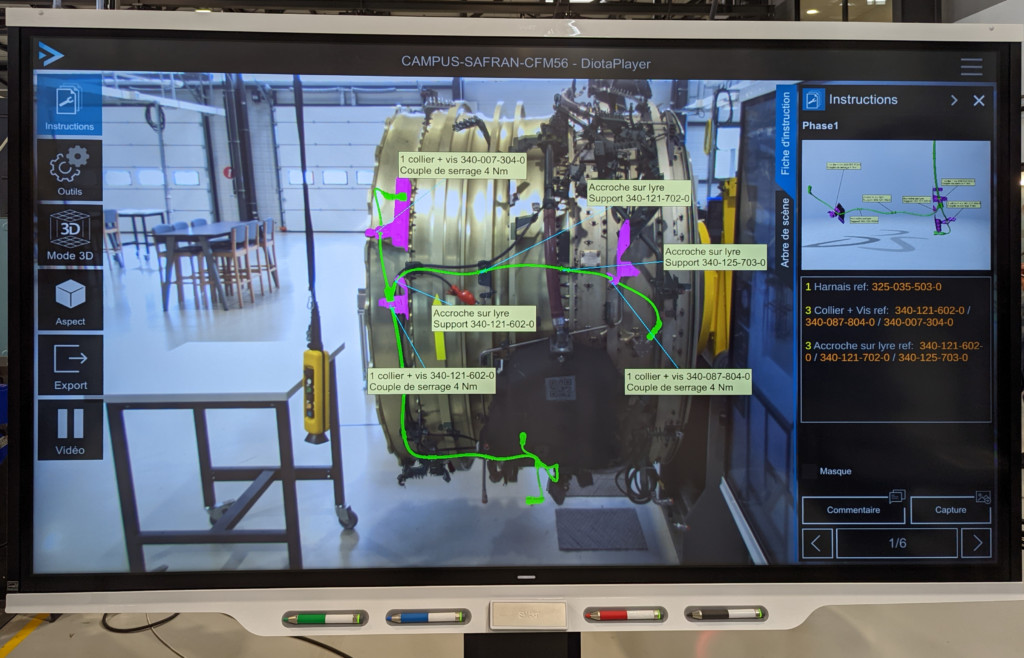 It is indeed an augmented reality or, as they called it, a mixed reality. The picture is a live camera feed, and the computer recognizes the parts and overlays the instruction steps. Below you see the setup in its entirety. At the upper right edge you see the camera pointed at the aircraft engine. If you rotate the engine, the overlay of the instruction steps moves with the engine. When I tried this out, I found the movement rather smooth, and the overlay was moving along with the engine without any noticeable lag or jarring. The display can be on a monitor or also in augmented reality goggles. The latter are easier to use but can cause some stress on the eyes for some users.

With Industry 4.0–related topics, it is often hard to distinguish what is just a demo and what it actual use. Hence I was thrilled when we saw this again later in actual use at Safran for the assembly of their nacelles.

Another technology that was demonstrated was a vibration sensor in milling tools. While the concept is not new, I liked the implementation by Schunk. The sensor measures vibration in three directions, and transmits the data wireless through Bluetooth. From this they calculate a chatter index. Like similar vibration sensors, they measure the vibration to detect problems, ideally before they happen but at the latest when the tool is broken. The internal battery lasts for eight hours before it needs to be recharged. The picture below shows one of the tools including the charger cable and the display. The display was also on a larger monitor. 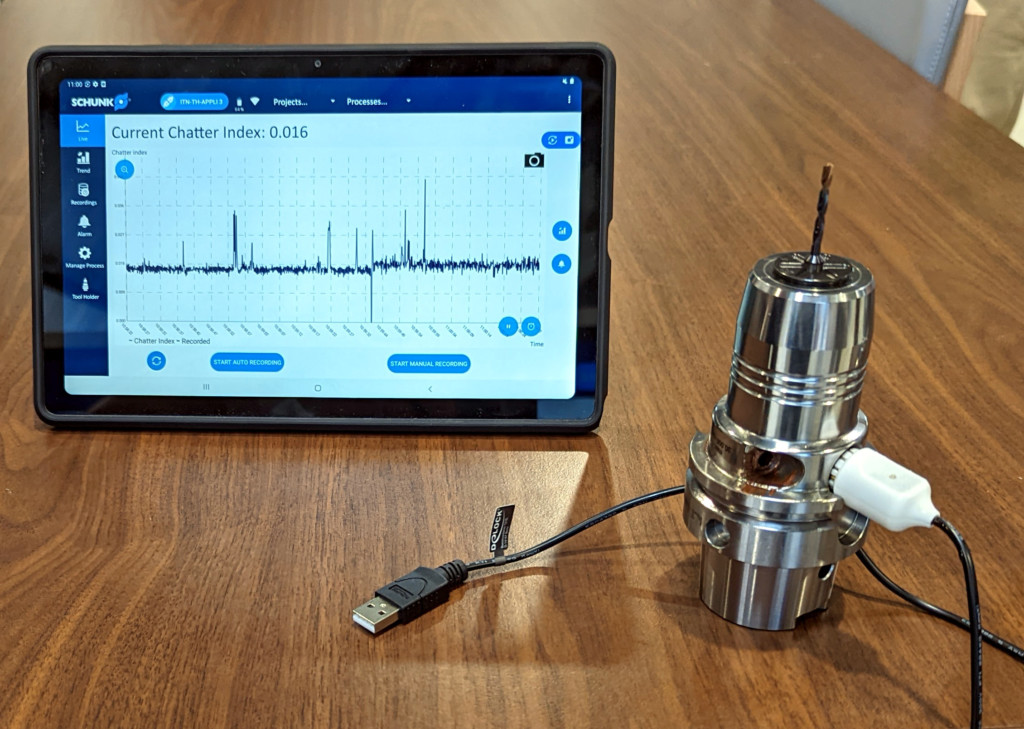 The Centre Innovation Évry, from the University of Évry Val d’Essonne/Université Paris-Saclay, in Evry and funded by a consortium of different engineering schools as well as Dassault, Fanuc, Schunk, Cisco, and the startups Datategy and Cosmyx, is a training factory including a full-sized assembly line for scooters for students, researchers, and companies to experiment with Industry 4.0. As a lean guy, I always find the problem with such model factories is that they rarely run at full capacity, and hence it is not possible to do typical lean optimization like reducing waste or fluctuations. It was also clearly visible on the scooters that they have been assembled and disassembled quite a few times already. However, the goal here is not efficiency or flawless scooters, but instead to research Industry 4.0 solutions, and for that purpose the factory is well designed. 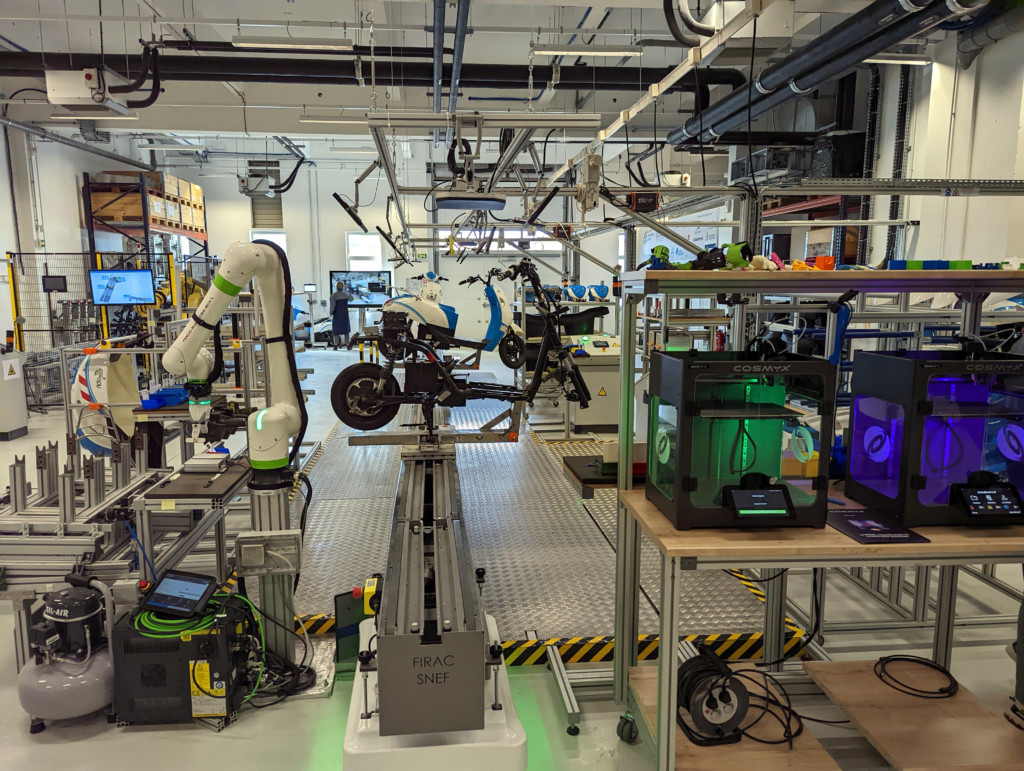 What I found particularly interesting was the management of the AMR (autonomous mobile robots), a highly autonomous type of AGV. The AMR knows where it needs to go and decides the route itself. I tried this out a few times and intentionally blocked an AMR . If necessary, the AMR even took the long way around the complete assembly line, as illustrated by the sketch below. 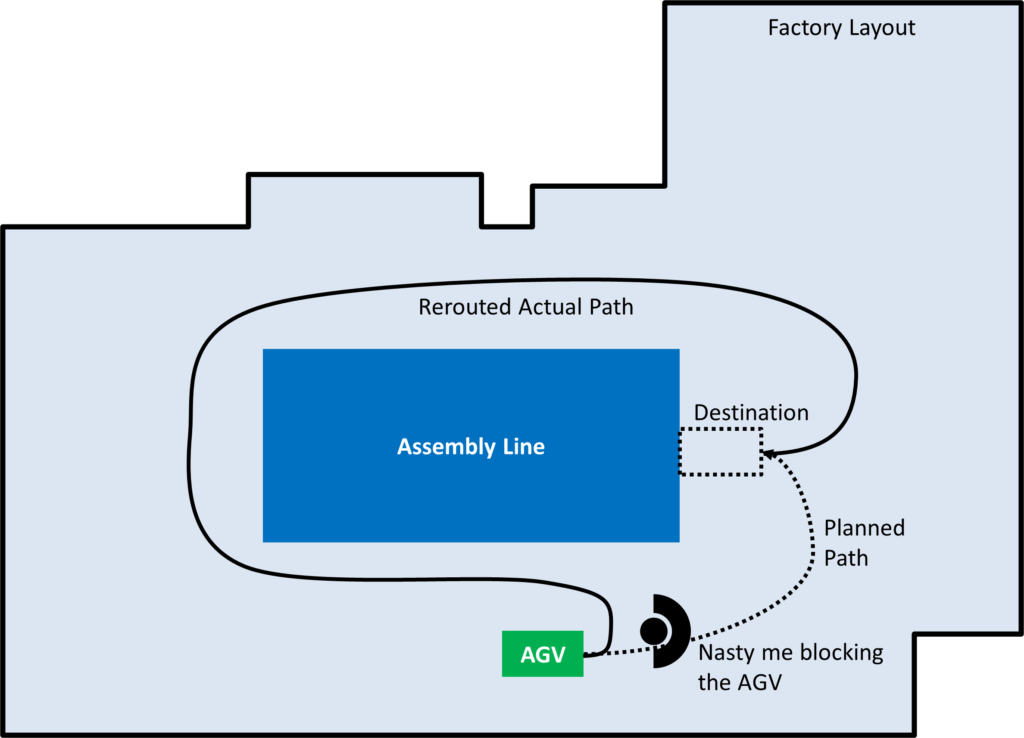 The AMR navigated using LIDAR (sort of 3D laser scanning). Below is the screenshot of the LIDAR of one AMR . Black are permanent structures, but what I found amazing were all the red dots—these are our feet. This navigation works very well. When I was trying to block another AMR (not for fun, it is science, of course), it went around me through a very narrow gap but at quite high speed. There was less than 30cm between the AMR and my feet. It felt quite fast, and I was happy to wear safety shoes, just in case. During our visit, a few other members even got touched by an AMR , but only at slow speed. For example, the handle of a scooter on an AMR gently touched the arm of a team member. 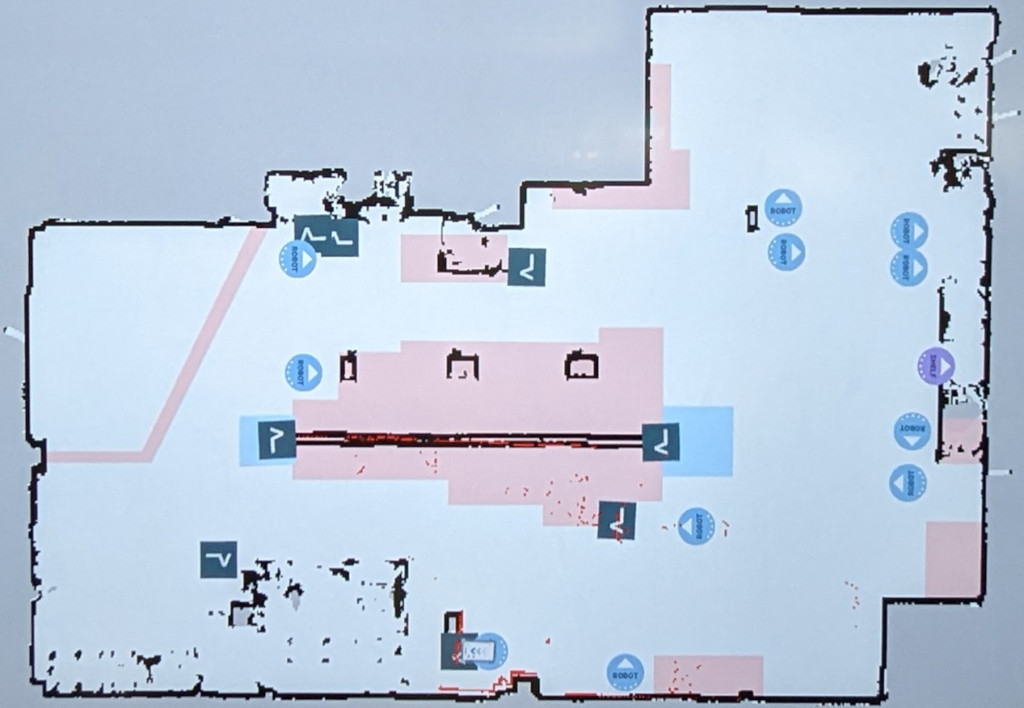 Overall, these two research labs were quite a nice visit, and a good start to our van of nerds in France tour. Now, go out, keep on reading for more visits of the Van of Nerds, and organize your industry!