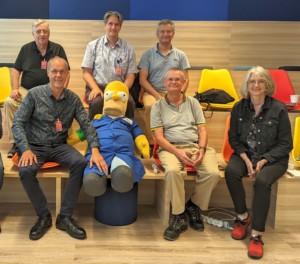 This post looks at two plants we visited during our Van of Nerds tour in France in 2022. Both plants are in areas in which I have little experience. The first one was SLB, specializing in sensors for oil field exploration. The second one was the Thales Group, where we visited the location manufacturing military sensors. In both locations we had a deeper look at internal logistics. This is (from the point of view of car manufacturing) a low-volume but definitely not a low-cost business. Let’s have a look.

SLB (formerly Schlumberger) is an oilfield services company founded in 1926. They build sensors for wells. I find it amazing that they have sensors in a hole I could not fit in but that go down for five kilometers. There they measure flow rates, electric resistance, temperatures, and many other parameters. They also provide specialized well cement and many other products. These products are technically not for sale, but SLB provides the service of using them. In effect, they sell data. Out of their 90 000 employees, more than 10 000 are field engineers that run these sensors on site.

We were at the SLB Riboud Product Center (SRPC) in Clamart, France, where these products are developed and produced. The center employs around 1000 people. The company overall has a very open-minded “work together” culture. Their equipment is a low-volume high-mix both in production and in sending it out to field engineers. They are in the middle of a transformation toward an advanced (meaning agile) manufacturing system. We liked their roadmap quite a lot, although it had a rather ambitious schedule. Use cases and projects are derived from the needs of shop floor people and embody clever tricks for dealing with product complexity.

We had a quick look at actual manufacturing. Compared to the buzz in an automotive factory it is a low volume production. The focus of our visit, however, was on the internal logistics. They work on managing their inventory digitally, trying to organize their material. One challenge they face is that the different data structures of different systems are not quite compatible. Sorting these out is a lot of work. Most of the information can be accessed using a mobile phone app. Overall, they are on the right path with a motivated workforce, but there is still quite a bit of work left.

The Thales Group is a French multinational company that designs, develops, and manufactures all kinds of electrical systems. We visited their LAS (Land-Air-System) location in Elancourt, where 2000 people manufacture all kinds of military sensors, from night-vision and thermal goggles to missile guidance to electronic rifle sights to jammers to laser warning detectors to aircraft sensor pods. Much of this is of course quite confidential, and we did not visit manufacturing. Even in the showroom we were not allowed to take photos. The images here are from free sources, but are slightly outdated. A big part of their products is the software that runs the analysis and detection, and especially allows interaction between products. If the sensor pod detects a target, it needs to let the missile know where to go. Their takt time depends on the product but ranges from three days to two months.

Instead we focused on internal logistics, which we were able to visit after a background check. Like SLB, they are a low-volume, high-mix company. But unlike SLB, they sell the actual products instead of only the services. Like SLB, their logistics is on a path of improvement, and they managed to get their logistics well organized. They had a significant (-70%) reduction in their lead time and their pick rates (-60%), improved the picking quality, reduced the injuries, and drastically improved overall customer satisfaction. They also established a kanban-based pull system for most consumables, with more kanban loops to be implemented soon. They also established tracking for nearly all parcels, which they also called kanban,  although it is not quite a pull-kanban like for their consumables.

What was a mindset change for their thirty logistic people was the use of a takt time. For the different stages in their inbound and outbound logistics like inspection, scanning, packing, shipping preparation, quality check etc., they determined the takt time and also communicated this to their people. Knowing that they need to pack a parcel in average every 16 minutes helped with the mindset change toward a better performance.

We dug a little bit deeper on how they prepare their shipments, and especially how they merge different products for the same shipment. This is shown below (partially blurred for confidentiality). Each of these stands represent one shipment, and the paper indicates what products go into these shipments, which ones are already there, and which ones are still to come. For a low-volume shipment area it looks very organized.

Another nice feature was their andon board. While this is common in automotive, it was the first time I have seen such an andon board in a logistics office. Each clerk has a button, and pressing the button updates the andon board to yellow, which requires the team leader support. Besides the andon board, there is also an SMS to the team leader and sound signal. If the problem is not resolved in time, the andon board switches to red, and a wider group including the manager is alerted by SMS. They get around two to three alerts per day.

Through this and other measures like strict focus on FIFO (First In, First Out), work standards, and improvement of the layout, they were able to drastically reduce the lead time for their shipments. What I really liked was that they also not only looked at the average, but also at the fluctuations. Fluctuations (mura) are one of the major but usually overlooked sources of problems on the shop floor and in logistics, and Thales did a good job analyzing AND improving these fluctuations. Upping the frequency of the internal milk run from four per day to ten per day also helped both the lead time and the fluctuations. They also experimented with a leveling box, but this turned out to be difficult for customer shipments.

Granted, not everything works perfectly yet, but in which company does it? It was overall very interesting to see these two companies SLB and Thales making quite different but low-quantity, high-mix products, and to have a look at their solutions for their logistic systems. Now, go out, get your logistics under control, and organize your industry!