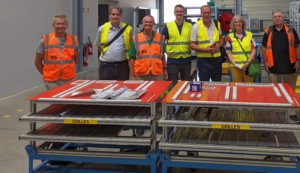 In this post I would like to talk about two other plants that we visited as part of the Van of Nerds in France. One is a railway repair and maintenance plant by SNCF, and the other is a body shop and final assembly by the well-known French car maker Renault. Both offered interesting insights. I am personally quite familiar with automotive assembly. The railroad repair facility, however, was something quite new to me. Let me show you.

SNCF stands for Société nationale des chemins de fer français and is the National Society of French Railroads. This state-owned railroad company was founded in 1938. The company transports both passengers and freight, and includes the iconic TGV high-speed service. It has around 275 000 employees.

We visited the lean pilot area of their maintenance and repair facilities in Saint Dizier, where they service and maintain all kinds of railroad-related equipment, from switches and signals to locks and keys.

SNCR is a state-owned monopoly, although due to EU regulations this will end in December 2023. Usually, competition helps a lot with kaizen simply because they force you to improve or else they will take over your business. A monopoly often has less urge to improve. However, we were pleasantly surprised by the improvement activities at their lean pilot area in Saint Dizier. There were lots of creative improvements and good work standards.

Railroad technology is made to last, and some of the products that are being serviced are older than the employees, with sixty-year-old or older technology still being used. Some tools used in the repair shop match the technology. For example, we have not seen the use of gauges in regular manufacturing for a long time. The workshop builds and repairs keys and locks for railroad equipment using gauges extensively.

This is all done by hand using a file. The accuracy of about twenty dimensions are checked using go and no-go gauges for both for the upper and the lower tolerance limit. This feels more artisanal than manufacturing, and I was wondering if a milling machine and modern measurement equipment could be more efficient. However, I don’t know the quantity of keys produced or serviced, so I can’t say anything on the financial feasibility.

However, a lot of other lean implementations were done nicely. Most of the material flow was organized by kanban and supermarkets. Floor markings were not only frequently applied but also followed consistently. A milk run was providing material. Plenty of team boards hung throughout the workshop. One of the nicest examples was their use of setups to make electric switch boxes. The employees themselves developed and set up different tools and jigs to make the assembly of such housings much easier.

Overall, they see five areas for improvement: 1) the use of andons; 2) the use of near field communication (NFC), where every part gets a small chip to identify it later if needed; 3) Gemba walks, 4) 5S; and 5) standards. Overall, the people seem to be motivated and the workshop is actively improving. Granted, as a (soon former) monopoly, they still have a long way to go, but at least in the lean pilot area, the process has started. 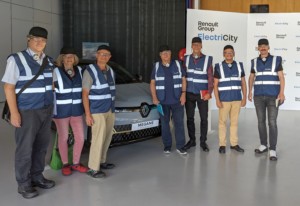 Renault, also known as the Renault Group, is a French car maker. Established in 1899, it is as of 2021 the ninth-largest car maker worldwide. Their plant in Douai was founded in 1970, and they have produced 10.6 million cars since then. Currently they produce the all electric Renault Megane E Tech as well as the Espace 5, with a body shop, a paint shop, and a final assembly line. The plant itself is running below capacity. At their peak in 2008, the plant had 7000 people, but currently has 2300 employees, at least partially due to the drop in demand caused by COVID. Most material transport in the entire plant is by AGV.

The automated body shop had 200 robots and 300 workers, and was for me the highlight of the plant. Due to the automation, the size of the workforce has been reduced over the years. On two floors they produce the body (lower floor) and the doors, hoods, and fittings (upper floor). This line produces the Megane. The takt time is 30 bodies per hour, although with a possible ramp-up to 60 cars per hour. This ramp-up will be implemented if there is increasing demand. Some equipment exists already at double capacity, and other equipment at current capacity but with the space to put another machine/robot in there to increase capacity again. The line is flexible to produce up to eight models in up to four platforms. Similar standardized lines can be found in many Renault and Nissan plants.

They assemble these metal parts with a precision of+/- 1 millimeter, which is verified by a 100% 3D measuring robot at the end. A monitor showed the timeline of the precision, making it easier to see if there was a drift. The data is also stored for traceability.

The robots had a nice andon showing the status of all robots at all stations. Each station had one column, and the number of fields represents the number of welding robots. If the pressure needed to weld was increasing, the field turned orange. This indicated that the contacts needed to be replaced soon. If the pressure was too high, the field turned red. This and many more data were also available in a large war room near the shop floor. 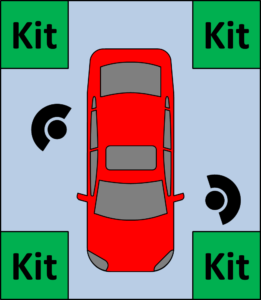 The final assembly was also interesting, as I find automotive assemblies always interesting. Compared to Toyota, there was more material on the shop floor, with quite a bit of AGV and forklift traffic going on. They said that they had more than one thousand AGVs in the plant. If they plan to double the capacity, the material and traffic may increase. Since all cars are different, they rely quite a bit on kitting, with four carts with the kits in each corner of the moving assembly line platform.

Overall, some quite interesting locations. Thanks to both SNCF and Renault for showing us their shop floor! Now, go out, keep on reading, and organize your industry!