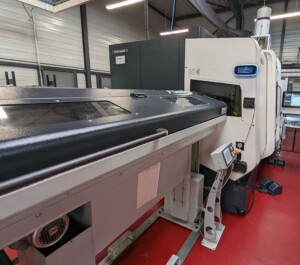 During our Van of Nerds tour in France in 2022, we came across a few vibration sensors. In manufacturing, vibration sensors are frequently used to measure machine- or tool-related data. Some of these sensors were variations of what I have seen before, but the one for measuring machine performance was stunningly good and something I have not seen before. Hence, in this blog post I would like to share my findings on vibration sensors in industry.

The first example is quite common nowadays and available from different makers. The idea is to add a vibration sensor to your cutting tools. This sensor measures vibration, and with some clever algorithms you can figure out if something is about to break or is broken already. Before a tool breaks, vibration typically goes up. One such vendor is Schunk. Their vibration sensors are inside the tool holder and are charged using an USB port. A charge lasts for about eight hours. The data is transmitted wirelessly via Bluetooth to their display, and a “chatter index” is calculated. 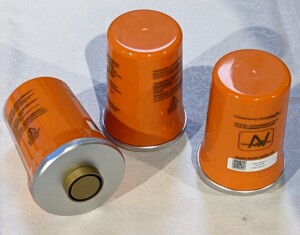 Another vibration sensor—or more precise, sensor package—is for preventive maintenance. The example I saw was from Nanoprecise, and was presented by Emsol. It is the size of a soda can, and simply sticks to the part of interest using the integrated magnet. The sensor measures vibration, sound, magnetic flux, humidity, and temperature, and transmits it to a computer (via WIFI, LTE, or LORA, depending on the model). The battery lasts two to eight years. It needs two weeks of training to understand how the underlying system works. 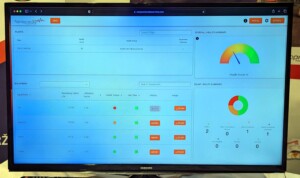 Based on the measured data, the system calculates a health score. I saw quality measurements coming from the vibration sensor values for imbalance, misalignment, looseness, inner race of a bearing, outer race of a bearing, and bearing balls.  (Note: This is not from the Van of Nerds, but I saw it at the PIT Adria Summit conference by Targer Consulting in Bosnia-Herzegovina.)

These examples above seem to be good, nice solutions using modern digital tools. However, what blew me away when I saw it was KeyProd from JPB Systeme. They developed a vibration sensor that is also attached to the of side machine tools, like a lathe or a milling machine, using magnets. It is powered by battery, or, better for longer use, with a simple USB power supply. It needs no digital connection to the machine whatsoever. You also don’t need to stop the machine to attach the sensor.

The vibration sensor then learns the vibration pattern of a “good” part. It needs two good process cycles to learn what a “good” part looks like. During that time, the integrated light is blue. Once it has learned the pattern, the light switches to green for normal operations. If there is a breakdown or abnormality, the light goes red. However, it also detects micro-stops, at which the computer turns orange. This is all done using conventional analysis rather than artificial intelligence… but that is common in industry. Most uses of AI are heavily advertised for a small actual use, and the majority of Industry 4.0 is still using conventional algorithms.

These computers with a vibration sensors can count how many parts were produced, and also measure an OEE. While there are many ways to detect an OEE, KeyProd is the first one I know that can also detect micro-stops, which most other OEE measures have difficulties detecting. They categorize the time data in the following categories

This data can also be used for a bottleneck analysis, which I really liked since this is one of my key research topics. The data is also used for preventive maintenance to alert the operators if something is getting worse. Naturally, this data is sent to a central hub, and is used for digital display boards. And here I think is the second major advantage of Keyprod: one of the major challenges of digital display boards or ERP data in general is to get all the different operating systems and data formats of these machine tool makers on the same standard. And this is huge. At Bosch, trying to get control of the mass of data is currently their biggest Industry 4.0 or IT project. Even for modern machines this is tough, but if you still use a twenty- or thirty-year old milling machine, you may have difficulties simply finding a plug that fits the data port. (The exception here seems to be the semiconductor industry, but they operate with different budgets than anybody else anyway.)

KeyProd bypasses all that. Since it needs no connection to the digital side of the machine, it is completely independent of whatever the operating system of the machine is. Even old pre-Industry 4.0 machines can be brought into cyberspace simply by attaching the digital brick to the machine. Hence, I think KeyProd is a good way to integrate your machines on the same digital platform.

Rental of a KeyProd computer was, at the time of writing, between €150 and €250 per month, depending on the model and its features. At that time the device was available primarily in France, but JPB planned to expand to other markets in 2023. Please note that at the time, it is primarily for mass production of many identical parts. If your machine still has a machinist at the controls it may be difficult. Similarly, if you produce customized unique milled parts, the system cannot learn or analyze due to a lack of repetition. The system is currently in use for milling machines, lathes, general machining, stamping, assembly, packaging, winding, ribboning, and more, as long as there is some vibration. Overall, both I and also my fellow nerds were quite in favor of this system.

I showed you here three vibration sensors, with a focus on the KeyProd system. But there are many more, and vibration or sound analysis has much more potential. For example, another company, PeakProfiling, started out by analyzing Mozart and diagnosing Attention-Deficit / Hyperactivity Disorder (ADHD) through voice samples, but has now also branched into industrial sound analysis. There are many more, and a simple google search for vibration analysis industry service gives about 40 million results. So, the topic is definitely buzzing and has quite a bit of future potential. Now, go out, put your ear to the milling machine (okay, maybe not literally), and organize your industry!

P.S.: If you are wondering, this is not an advertisement or sponsored content. I have not received anything from the companies mentioned (besides them letting us see the factory and serving us some quite nice chocolates during our stay). I write my own opinion here freely. Same as with all my other blog posts.