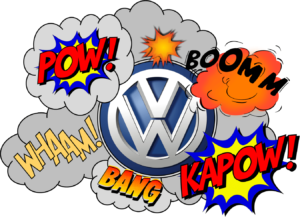 In the last months, there has been an unprecedented power struggle between Volkswagen and its suppliers. Two of the suppliers stopped delivering, leading to a full stop of multiple production lines at six Volkswagen plants, including its main plant Wolfsburg. This whole mess comes on top of the separate problems Volkswagen has had with its Dieselgate. In this post I would like to look in more detail at what happened.

Volkswagen obtains one of its transmission parts from ES Automobilguss, and at one point ES Automobilguss stopped supplying. Almost simultaneously, another supplier, CarTrim, stopped delivering seat components. Both suppliers were single source, meaning Volkswagen had no alternative supplier for these parts. Hence, since these parts were missing, Volkswagen could not produce anything.

This led to the shutdown of the Golf’s production in the main plant Wolfsburg on Saturday, August 21. Shortly thereafter, other plants stopped producing due to lack of parts: the Passat line in Emden, the Passat and Golf lines in Zwickau, transmission assembly lines in Kassel, engine production lines in Salzgitter, and lines in the Braunschweig plant. These lines were stopped for one week before the suppliers agreed to supply again.

The cost of stopping a line is enormous. The cost of stopping multiple lines in six plants is gargantuan. The losses at Volkswagen are probably in the hundreds of millions of euros. Volkswagen undertook legal action, trying to force the suppliers to supply parts again and also trying to impound the available parts, although neither move was successful before the end of the supply stop. This is unprecedented in German industry.

In any case, the suppliers are now supplying again, and all plants are running.

CarTrim also transferred some of these claims to ES Automobilguss, resulting in ES Automobilguss also stopping its deliveries. Even the German government got involved when the state of Lower Saxony asked the suppliers to provide parts – but then, the state owns 20% of Volkswagen and hence is hardly unbiased. In any case, after a nineteen-hour negotiation marathon on Tuesday, August 23, 2016, the suppliers agreed to deliver again.

Not much is known about the deal that was made. The suppliers got a contract for the next six years, with a second source outside limited to 20% of the total volume. According to the official press release, they agreed “in the form of a mutual, trusted and improved partnership in all areas” after an “amicable and fair agreement.” Yeah, right. Trusted and amicable … my ass!

A Bit of Background

If you think it’s strange that both Car Trim and ES Automobilguss stopped delivery at the same time, it’s not. While the companies claim to have no connection, both are part of a nontransparent but larger network of suppliers controlled by the Prevent Group and its subgroup, Eastern Horizon. Hence, this delivery stop was probably orchestrated behind the scenes.

The 58 million euro claim was also probably only the straw that broke the camels back. Volkswagen has an extremely shitty reputation with its suppliers. It is known to squeeze the last cent out of its suppliers. Contracts are made in sort of an auction style, so-called Mehrraumverhandlungen (multi-room negotiations). All interested suppliers have to come to the same place but different rooms. Volkswagen gets the cheapest offer and then asks all others if they can undercut this offer. Rinse and repeat, until one last supplier is the winner, although “winner” would in my opinion be the wrong word here. Oh, by the way, if the supplier decides to quit too early, he risks being cut off from Volkswagen completely.

Volkswagen is also known to issue one-sided demands (e.g., a price reduction of x% from next month). This is not really a request but more of an order, and Volkswagen expects the supplier to comply. It is said that Volkswagen wanted to reduce the damages from Dieselgate by handing the costs down to its suppliers and cutting their prices even more.

There are rumors of canceled contracts after the supplier has spent lots of its own money in the hope of future business. People in the purchasing department are also rumored to be extremely rude, and yelling and cursing seems to be common.

A survey of supplier satisfaction with their customers shows Volkswagen regularly at the bottom of the barrel, along with General Motors. By the way, on the other end of the spectrum you will find Toyota as one of the most popular customers for suppliers, with a reputation of tough but honest and fair. From the view of many suppliers, Volkswagen cannot be trusted, and even written contracts and government laws do not always hold weight.

A Bit of History of Volkswagen Procurement

Hiring from the Military

In 1990, the Cold War ended and the German army was drastically reduced in size. To help the soldiers in finding new jobs, the German government asked larger companies to hire former officers from the German armed forces. Rumor has it that Volkswagen hired a large number of officers for its purchasing department.

In the army, the command structure is clear. The superior gives an order, the inferior rank follows the order. That is how these officers operated.

Just about the same time, Volkswagen hired another top manager, José López, from General Motors. At General Motors he was known for his extremely rough treatment of suppliers, achieving unprecedented concessions from the suppliers.

He continued this strategy after starting at Volkswagen in 1993 as the head of production optimization and procurement. Treating his own production workers as poorly as he did his suppliers, he soon earned the moniker “Würger von Wolfsburg,” the “Wolfsburg Strangler.” He also had a lot of strange habits. He ordered his people to wear their wristwatch on the right wrist rather than the usual left one as sign of their loyalty, and ordered them to drink lots of water.  He also called his people not employees, but warriors (“Krieger“). But then, many of them were ex-military anyway …

He was able to drastically reduce prices for sourced parts. However, as prices went down, so did quality, and defects increased. Hence this effect of getting crap if you pay crap is now known as the “López Effect” in Germany.

López did not stay long at Volkswagen, as he happened to take boxes upon boxes of confidential material along from his previous employer, GM. In the resulting big-picture lawsuit where even President Bill Clinton and Chancellor Helmut Kohl intervened, he was forced to step down 1996.

In 2015 Volkswagen hired another tough cookie from the competition, Herbert Diess. Before he became head of procurement at BMW, BMW had an extremely good reputation with its suppliers. Diess changed that, and BMW is now at the bottom of the rankings by the suppliers.

One of his popular methods to reduce prices was re-negotiation. A contract with a supplier was open for re-negotiation whenever BMW felt the need to, which meant the contract was not worth much for the supplier.

In any case, he is now a member of the board at Volkswagen, and I don’t think he has changed his ways. He will continue to squeeze prices in any way he can, so he will fit in well with Volkswagen …

In any case, as the shutdown of the Volkswagen plants shows, the treatment of suppliers by Volkswagen is not sustainable. The whole approach goes against the lean idea of respect for people or respect for humanity. Volkswagen has little respect for its suppliers. Toyota, on the other hand, is still one of the most popular customers among automotive suppliers. They also regularly generate cost savings, but they split them with the suppliers. It is just a so much different philosophy, which Volkswagen or GM seem to be incapable of.

In any case, I hope this article was interesting for you. Now go out, be nice to others, and organize your industry!

As expected by all insiders, Volkswagen just hit back. All contracts with the suppliers ES Automobilguss, Car Trim and Prevent Foamtech were cancelled without notice. About 700 employees face reduced hours or termination. According to the Wirtschaftswoche,  Volkswagen is willing to pay over 200 Million euros of additional expense for switching suppliers and legal costs to get rid of Prevent. So much for the “mutual, trusted and improved partnership in all areas”. But of course, the legal battle continues and Prevent is going to court.

Update May 2018 … The Thriller continues

According to the news, Prevent through a sub company Castanea Rubra Assets GmbH bought a steel foundry Neue Halberg Guss in Germany, which is a major supplier to Volkswagen for crank cases, crank shafts, and cylinder heads. These are all parts which Volkswagen cannot get elsewhere in a hurry. And, Prevent just increased the prices up to tenfold (yes, 1000% more). This may cause additional costs for Volkswagen of up to 180 Million euros. In the medium term the ca. 2000 employees of Neue Halberg Guss may lose their jobs if nobody does business with them anymore. Just for good measure, Prevent is also threatening to sue Volkswagen for possibly 1 Billion Euro. Somehow, this story has the fascination of a train wreck. It is very bad, but also very interesting…