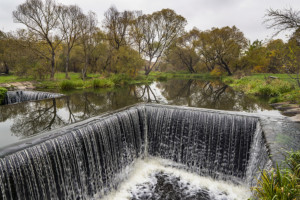 Everybody in lean talks about flow. You have to create flow! In particular you have to create one-piece flow. However, while this is true, I often find a lot of confusion on what flow means. Time for a post that goes to the basics and looks at what exactly flow is. My next post takes this up one step by looking at what one piece flow is.

Let’s start with the easy part. What is flow? In particular, what is flow in manufacturing? In its most basic form, flow refers to the movement of parts. The opposite is parts standing still. Hence, you want to get your parts moving. To be more precise, you don’t just want them to move around randomly, but move in the direction of the value stream. Otherwise you could just put your entire plant on a ship and drive in circles, but that is not the point.

In reality, at any given time, at least some of your parts are standing still. For one, you may need to stop parts for the actual processing. While there are moving assembly lines, you may also have processes that are in one spot, for example a milling machine. Customarily, parts that have stopped for processing are not counted against your flow. If it is a batch process like a heat treatment or a drying process, there may be a lot of parts that are standing still but are being processed for a long time.

But you surely also have plenty of parts that are neither moving nor processing. Your warehouse is full of not-moving parts. And, if you are any typical company, these not-moving parts outnumber by far the moving or processed parts. In sum, flow tries to reduce this share of idle parts and hence also to reduce the lead time. This is very closely connected to the reduction of inventory. Inventory is usually needed to buffer fluctuations, hence the main lever is to reduce fluctuations to reduce the inventory. Beware. This sounds a lot easier than it is. So overall, flow aims to reduce idle inventory and to increase the share of parts in transport or in processing.

So, how much flow do you want? This is also easy only in theory. The true north of flow is 100% in processing or in transport. Just in Time and Ship to Line are common lean methods that improve flow by having less parts idle and more being handled or processed. At the same time, like most true north visions, 100% flow is not possible. You probably always have some products idling. 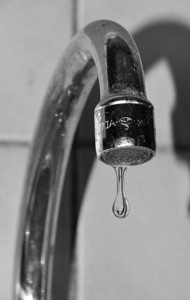 There is also no agreed on goal for what percentage of the parts should be flowing. In many factories, my guess would be that in excess of 95% or even 99% of the parts are idle at any given time. In this case, even getting it down to 90% would already be an improvement. The goal, simply, is to become better. Whatever your flow rate is, your target should be a higher flow rate.

At the same time, I do not know of any plant that actually measures this flow rate. The closest thing I know is on value streams where the percentage of time a part is processed versus the entire lead time could be plotted. The simple value stream map below has a up/down line at the bottom, where the processing times and the waiting times for a typical part are added. Here, the part waits for around 6 hours in the inbound warehouse, before being milled for 33 seconds, before waiting another hour for 25 seconds of stamping.

Overall, the part is not processed for 99.85%, and only 0.15% of the time there is processing, which is hopefully also adding value. Hence, the percentage of value added time is only 0.15%. Such low numbers of value-added time is typical in many factories, and even 99.99% not value add or more is quite possible. This percentage is a close approximation of the flow, or lack thereof. But do note that these idle times do include transport, which would be part of flow. Yet, for me it makes no sense to also include the transport times, since transport by default is waste.

Just for the record, the transport of the parts should also be at normal speeds. If you slow your transports down, your share of goods in progress will increase. This would follow the letter but not the spirit of material flow.

Similarly, if you offshore your factories, a lot of parts would be on the ship moving for months toward the customer. While this numerically would improve the flow, it would also increase the lead time, which is just the opposite of what lean wants you to do.

So, in general, you want to improve flow, or – more precisely – improve the percentage value add. The ultimate but unobtainable vision is 100% value add. It takes a constant effort to merely not become worse, let alone to become better. You simply do not have enough time to improve everything. So, where should you start?

As always, you should start where you get the biggest bang for the buck. Flow reduces inventory and hence also lead time. What parts give you the biggest benefit for reducing inventory? Usually, these are the expensive parts due to their tied-up capital, the large parts due to their storage cost (and related parts that require special storage conditions like refrigeration or climate control), and parts that expire quickly. As for the lead time, this is often critical for make-to-order final products. Depending on your factory, you may have some additional factors to include. This compares with the effort to reduce inventory, which is probably harder to estimate. Again, start with the part that gives you the best benefit for your effort. Don’t optimize your inventory of O rings for 2 cents each while the expensive engine blocks are piling up.

So, in sum, creating flow is in reality improving the percentage of value added time by reducing inventory, and you should start improving this with your expensive and large end products. The idea of parts actually moving (flowing) is more of a visual metaphor to highlight your parts idling in your warehouse. In my next post I will move the concept of flow one step further and explain the idea of one-piece flow. You surely have heard of this, but there is still a lot of confusion on the idea. Now, go out, get your material flowing (or at least less sitting around), and organize your industry!