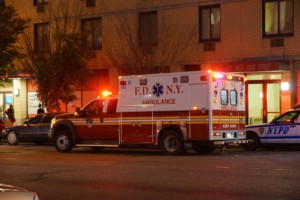 On October 21, 2021, actor Alec Baldwin handled a prop gun on a movie set that fired and killed cinematographer Halyna Hutchins and injured director Joel Souza. And, as far as I know, it was not even Alec Baldwin’s fault. While the investigation is still ongoing, it looks like a lot of safety regulations were ignored or applied sloppily. Accidents in manufacturing and other industry also often have not a single cause, but multiple points of failure, before somebody gets hurt. A good reason to look deeper at workplace safety. This first post looks in more detail at the events on the film set, and a second post looks generally at workplace safety.

On October 21, 2021, actor Alec Baldwin was on the set of the movie Rust, a Western movie where an outlaw (played by Baldwin) set out to rescue his son from a murder charge. As is common with Western movies, guns play an important part in the story. Overall, the movie industry frequently uses weapons. Anybody with a sliver of knowledge on gun safety knows that pointing a gun at somebody is a big no-no, as there may be an accidental discharge (a gun firing while it is not intended) or a negligent discharge (a gun firing due to an operator error). Pulling the trigger in such a situation is even worse, because then it is neither accidental nor negligent anymore. Yet, pointing a gun at someone and pulling the trigger is a common occurrence in the movie industry. Since the people on set do not have a death wish, there are many stringent rules to prevent accidents and injuries.

It is common to use replica guns that look like guns but cannot hold ammunition or fire a blank or a bullet. These are used for rehearsals, and whenever no actual “bang” is necessary. But other guns are functioning. Often, these are modified so that they cannot be loaded with a cartridge that has an actual bullet, but may contain some explosives, often much less than a normal cartridge. Most people would call these cartridges blanks, although in filming, blanks refer to dummy ammunition that holds no charge (although at close distance they can also be dangerous). Even when using real guns on movie sets, only such blanks are allowed. Real bullets are not allowed on set (with very few exceptions). In the filming industry, they also use the terms cold gun (which has no charge inside whatsoever) and hot gun (which contains some sort of explosives). Even then, if a hot gun is fired in the direction of the camera or crew, a safety screen is set up to protect the people downrange. 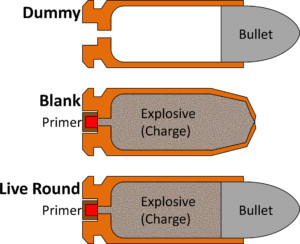 The person in charge of guns is the armorer, who has to ensure that guns and blank ammo are locked away, and that guns are cold and in proper condition, with nothing stuck in the barrel (shining a light through or using a wooden stick to poke through). The armorer also trains the actor in proper gun handling. The armorer retrieves the gun only when needed, and loads the gun with blanks only shortly before the filming. Together with the assistant director, they have to ensure that a gun is cold or hot, and they give it directly to the actor before the filming. Cold guns can also be “fired” into the ground as another redundant safety check. Overall, there are many redundant measures to ensure gun safety in the film industry – and I did not even get into the paperwork of it all.

Hence, accidents are rare on movie sets (Wikipedia has a list of prop weapon accidents, most of which seem to be bladed weapons). The last famous actor who died in a gun accident on set was Brandon Lee, nearly thirty years ago in 1993. The scene required an actor to shoot Lee with a blank (powder) cartridge. However, a bullet from a previous misfire was stuck in the barrel, and the armorer failed to check if the barrel was clear. The blank cartridge had enough energy to propel the stuck bullet out of the barrel and kill Brandon Lee.

What Went Wrong on the Set of Rust?

On the set of Rust, many things went wrong. Gun safety was very sloppy, and before the fatal accident there not one, not two, but three accidental firings of a gun. Three times a gun made a “bang” when it should not have (two times with Baldwin’s stunt double, and once with another woman who injured her foot by the discharge). Seven stage crew members actually walked off the set due to gun safety concerns as well as issues with their payments. They were replaced with non-unionized workers, and the filming continued. The deadly accident happened on the same day that these workers walked out.

The events leading to the accident are still under investigation, but allegedly some of the crew used guns from the set to shoot at beer cans with live rounds in their spare time, only hours before the accident. Live rounds may have been mixed with dummy rounds and blanks on set. Obviously, a proper check for the state of the gun was not done. Armorer Gutierrez Reed handed the gun to assistant director Dave Halls, who handed it to Baldwin and announced the gun as a “cold” gun. This cold gun supposedly did not contain any explosives, but actually DID contain a charge and probably also a bullet. When Baldwin drew the gun for a rehearsal, a single round fired, killing cinematographer Halyna Hutchins and injuring director Joel Souza. Supposedly, Baldwin did not even pull the trigger.

A lot of failures came together to lead to the death of Halyna Hutchins. Prop guns should not have been used for private target practice. Live rounds should not have been on set. At least two people should have verified that the (supposedly) cold gun contained no charges before handing it to Baldwin. Following any of these steps could have prevented the death. Additionally, the three (!!!) previous accidental discharges on the same movie set, including one injury, should have given them a clue that something was seriously going wrong, and an investigation should have started. In fact, even a single discharge should have resulted in at least a more stringent adherence to the safety standards.

I actually feel sorry for Alec Baldwin. He received a (supposedly-but-not-really) cold gun. He was holding the gun when it killed his coworker. All the legal investigation notwithstanding, this must be a heavy burden on his mind. The legal fall-out is ongoing. Armorer Gutierrez Reed is accused of sloppy safety standards, but she claims she is being framed. Director Dave Halls’ attorney claimed sabotage by someone putting live bullets on set. Certainly, there is more to the story in the future. For me, the biggest problem is why there were three near misses or minor incidents, but apparently nobody did anything to prevent further events! There were quite literally three warning shots before Halyna Hutchins died! Anyway, in my next post I will look at safety in manufacturing and other industries. Now, go out, make sure your people are safe, avoid handling live firearms if you can, and organize your industry!