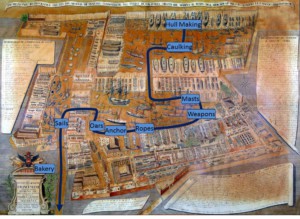 Whenever I am in Venice, I try to visit the Museo Storico Navale, near the entrance to the Arsenal of Venice. This museum has a set of beautiful detailed maps by Abbot Maffioletti showing the Arsenal of Venice in 1797, 1798, and “After Napoleon.” You can see in great detail the different steps needed to build and equip a sailing vessel. In this post, I will explain the material flow of the Arsenal of Venice, which was the largest industrial site in Europe and possibly in the world during its time.  Be warned, this post is rich in images. The material flow is partially based on the master thesis of my student Maren-Linn Janka.

The Arsenal of Venice had a quite elaborate material flow. Rather than assembling and equipping one ship at a time in one spot, only the hull was built in one spot. After that the hull was towed to the next location for the next step, until a completed ship left the Arsenal.

The material flow itself is shown in the map below. The blue markers show the likely locations of certain key steps in making and equipping a ship. All of them are explained in more detail below. 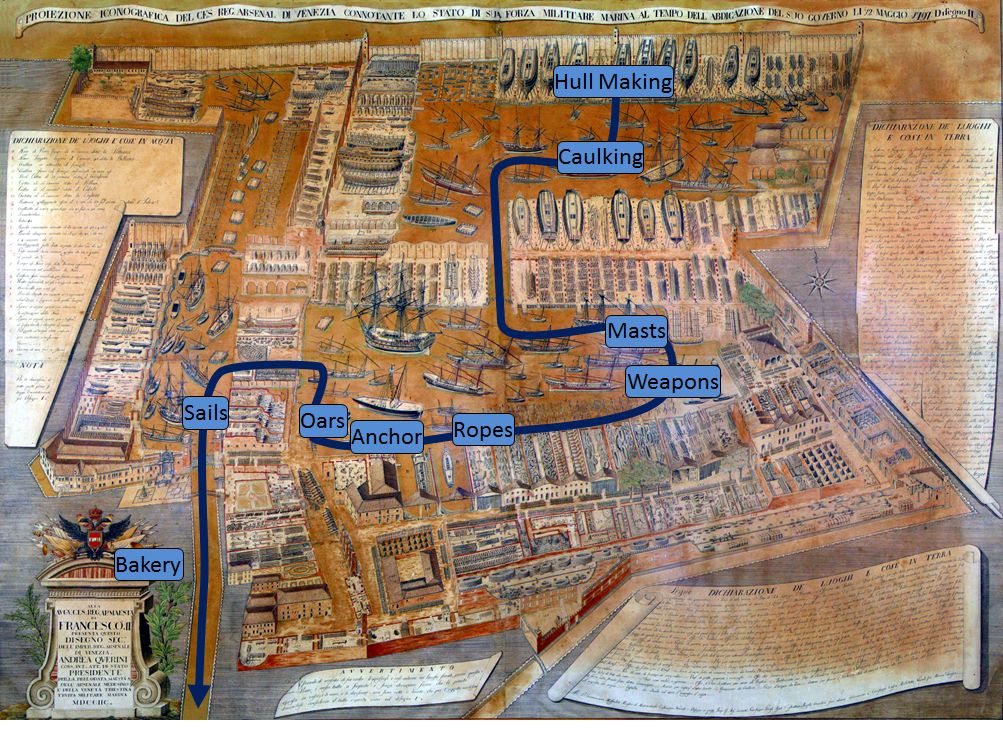 The images and the descriptions are based on the map by Abbot Gian Maria Maffioletti. I described the maps in more detail in my last post. In any case, here are the files again:

The first step in shipbuilding is the construction of the hull. The Venetian Arsenal introduced the frame-first technique, where first the frame is built, followed by the actual hull. This was both faster and cheaper than the traditional Roman approach of building the frame into an existing hull.

These hulls were often made years in advance. It seems that the Arsenal usually had a lot of hulls in storage and ready for use, and the average hull waited years before being completed into a ship.

The image above is a detail of the map, showing the area around the northern wall of the Arsenal. To show the details, Maffioletti did not draw the roofs of the buildings, and indicated only where the walls would be.  The panorama photo below shows how the area looks nowadays.

Pitch and Tar for Caulking and Other Uses 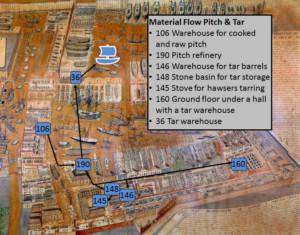 Pitch and tar was an important raw material for many different uses in ship making. Most importantly, the hulls were made watertight using pitch.

A completed hull was still rather leaky. To make the hull (more) waterproof, caulking was needed. For this, the ship was tilted to one side and then made watertight using fibers, tar, and other materials. From this point on, the ship was afloat, and towed from station to station. The image below shows the different stations from the map above in more detail. The index numbers match the numbers in the legend. 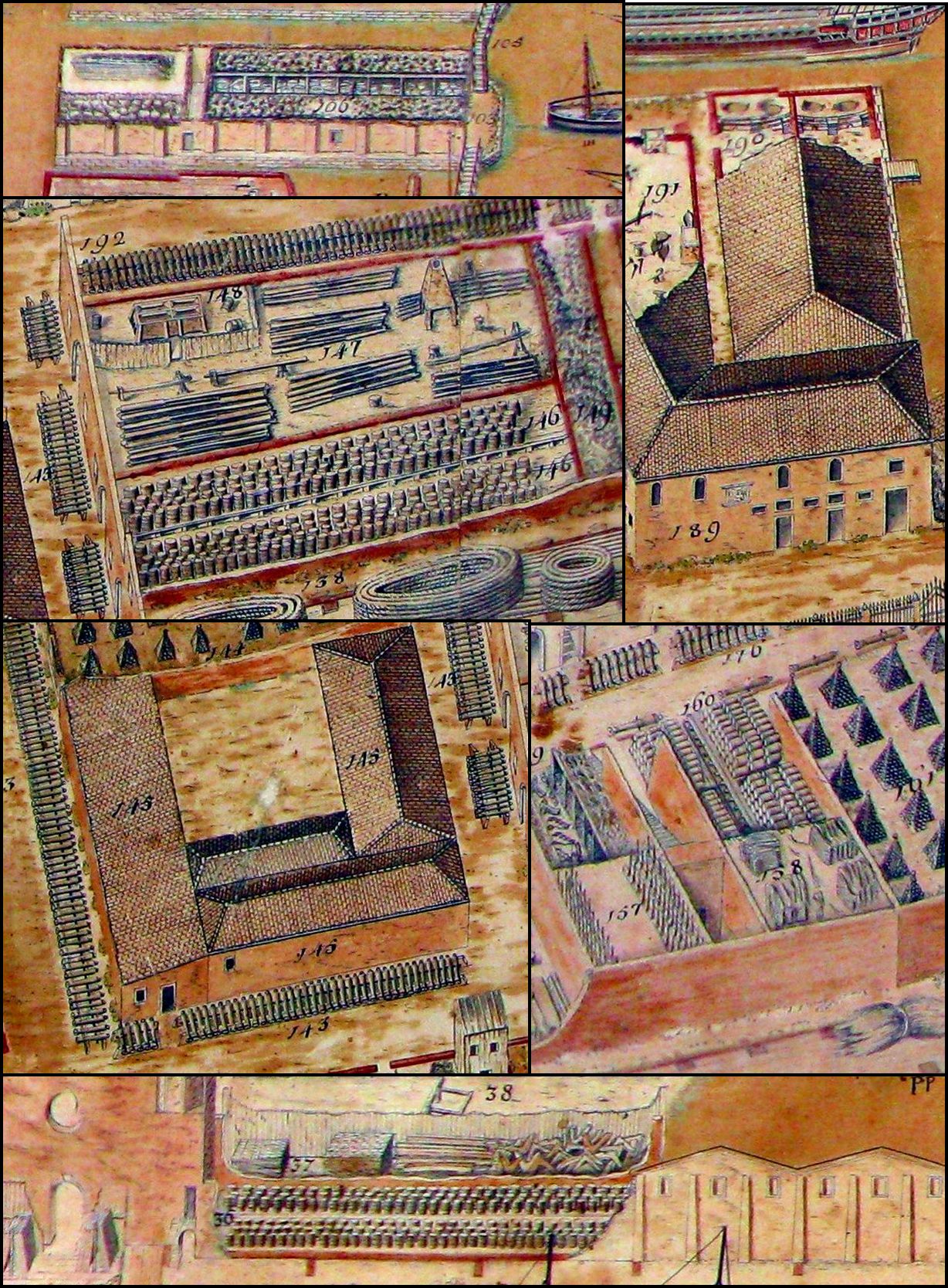 Installing of the Masts 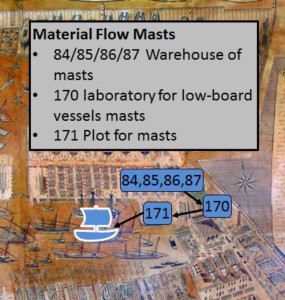 The next stop was to install the masts onto the already floating ship. Masts were readily available in standard sizes. The labels on the map represent the following sites. 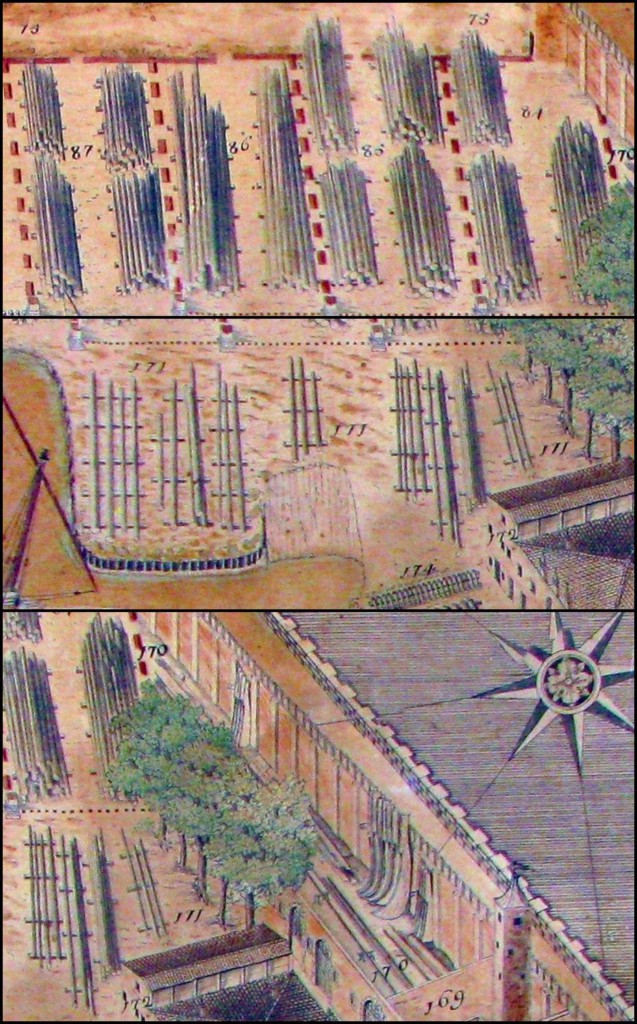 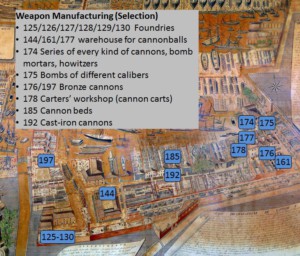 Naturally, a warship also needs cannons. The Arsenal had numerous cannons in storage to outfit warships. This area is also visible when visiting the Biennale. There is also a dedicated storage for cannon balls and gunpowder. 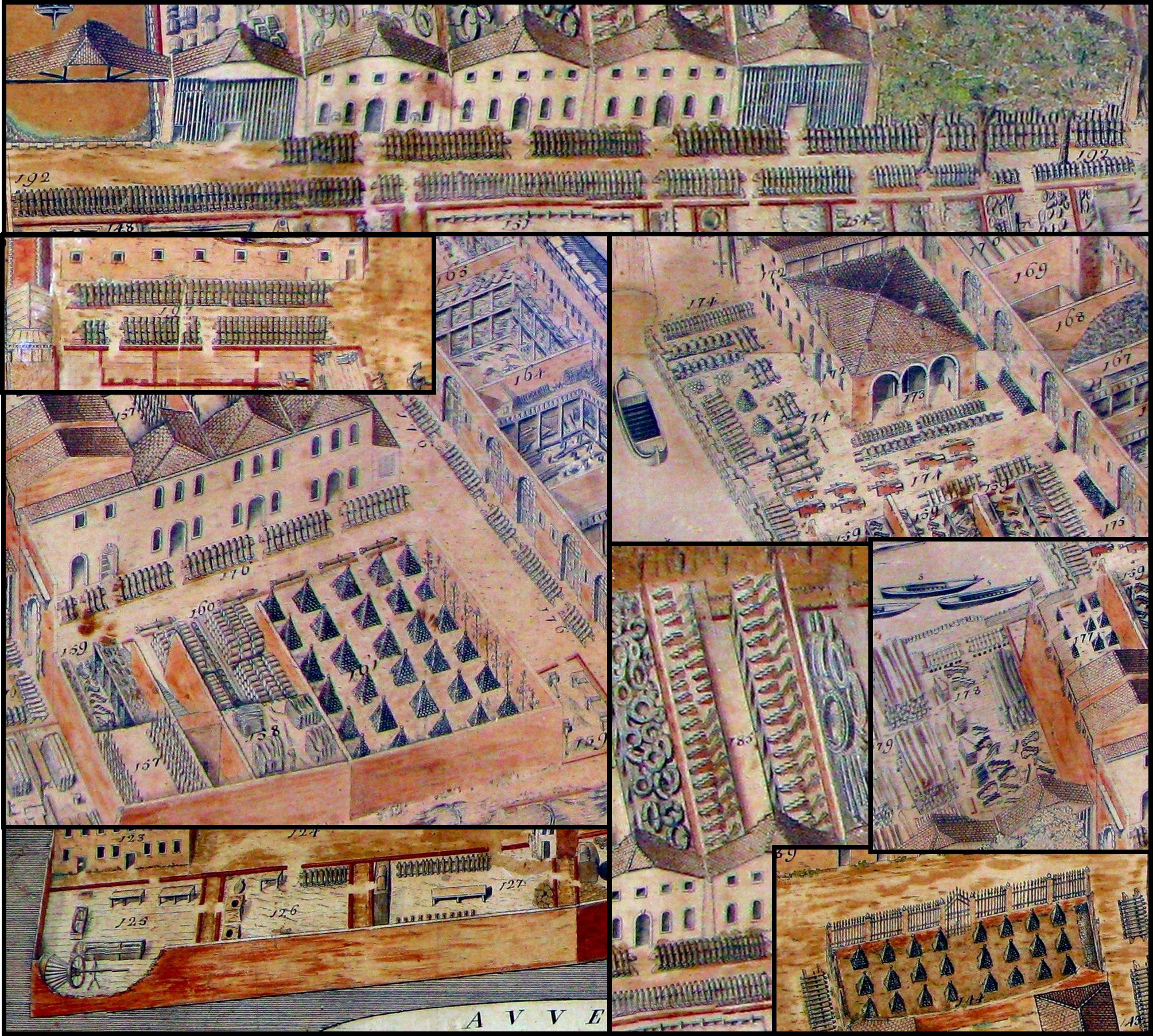 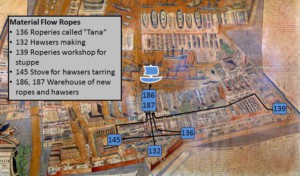 The Arsenal also had its own rope-making area. This building was very long and straight, and was the largest building within the arsenal. It still is a very long, straight building, now used for exhibitions like the Biennale in Venice, and it is pretty much your only chance to get inside unless you are a member of the Italian Navy. The photo below shows the view from inside toward the entrance. Unfortunately, when I visited, the length of the building was blocked with different installations, giving the feeling of multiple small rooms instead of one very long hall. 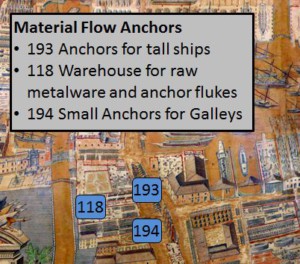 Almost completed, the ship was equipped with sails, anchors, oars, and rudders. These were also stored near the water gate. 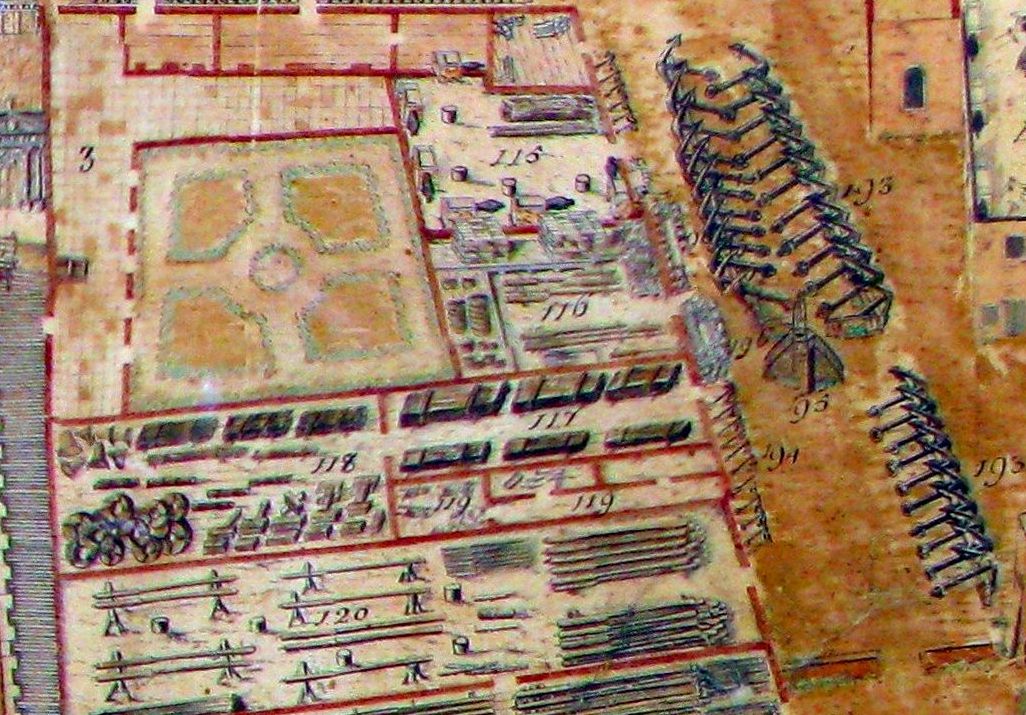 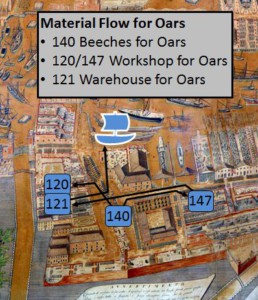 The material flow for the oars was located in the southern part of the arsenal, near the entrance. 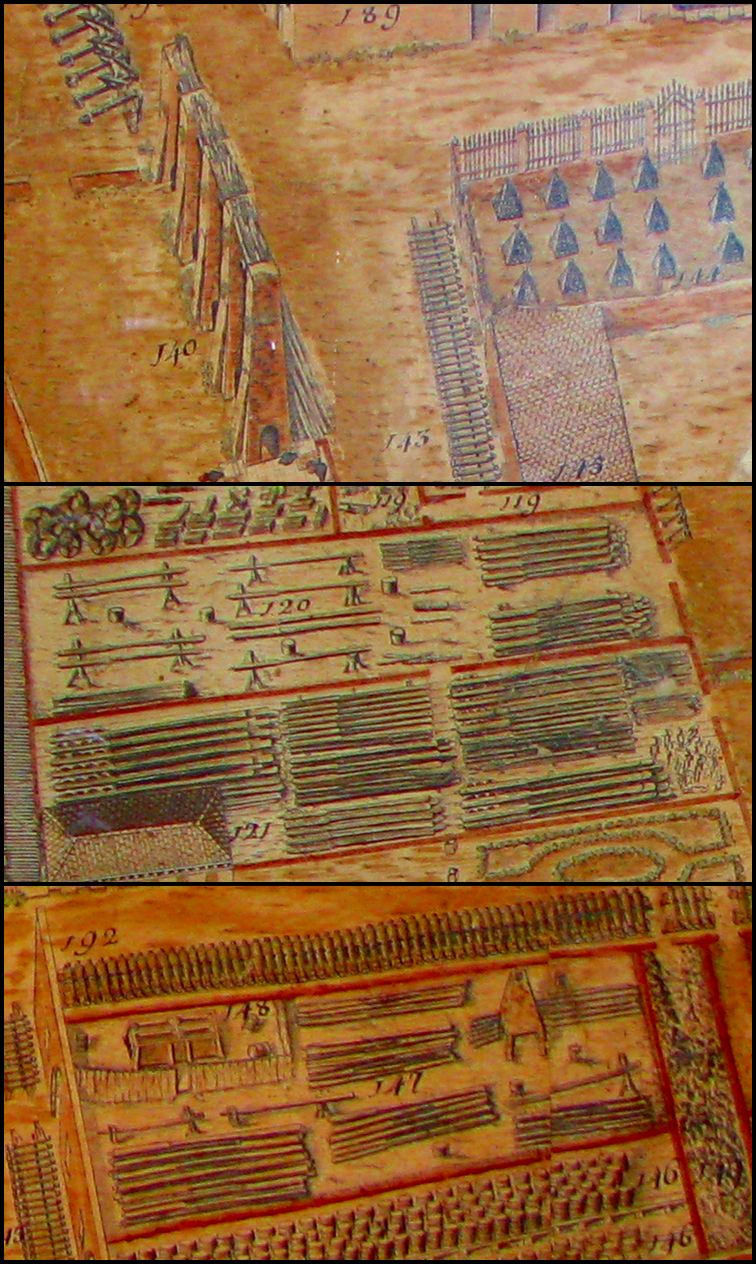 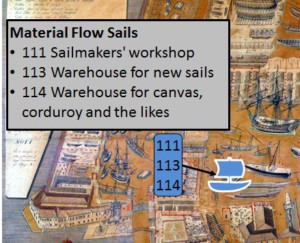 The sail production and storage was also in the southern part, near the water gate. The sail-making area also received supplies from the roperies and the pitch storage. 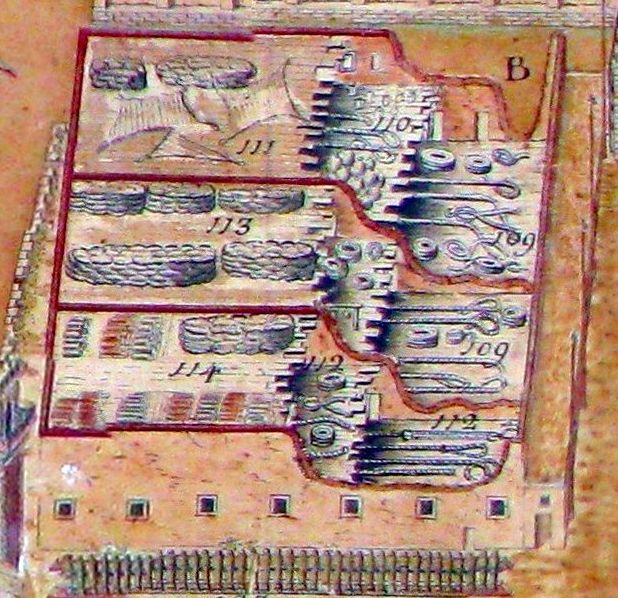 The last step of the process was the bakery. This was already outside of the Arsenal area and in the canal to the Laguna of Venice. At that stop the crew also boarded the ship, and the vessel was ready to sail. Unfortunately, I have been unable to verify where exactly the bakery was or if it still exists.

Was This the First Assembly Line?

Indeed, the Arsenal of Venice did for its time have a quite advanced material flow. This helped increase its productivity in times of need, which in turn helped Venice to become one of the major powers in the Mediterranean Sea.

Due to this good material flow, it is sometimes claimed that the Arsenal of Venice is also the first assembly line. Here I strongly disagree. There was little to no automation or mechanization, there was no organized speed of production, and the workers were usually rather tumultuous. Theft of material, tools, and time was rampant. It was at the forefront of its time, but it was definitely not an assembly line.

In any case, the era of the Arsenal ended when Napoleon Bonaparte conquered Venice in 1797. Nowadays the Arsenal is an Italian Naval base for training officers.

I hope this look back in history was interesting to you. If you like these kind of stories, you should check out my book “Faster, Better, Cheaper” in the History of Manufacturing. Anyway, now go out, control your material flow, and organize your industry!

If you are interested in more manufacturing history, check out my book “Faster, Better, Cheaper” in the History of Manufacturing, which of course also includes a chapter on the Arsenal in Venice:

A master student of mine looked in more detail of the material flow in the Arsenal of Venice. I also had a chapter on this in my book Faster, Better, Cheaper in the History of Manufacturing.

5 thoughts on “Material Flow in the Arsenal of Venice 1797”