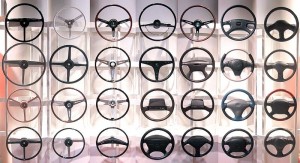 Mass customization promises us individually customized products at the price of a mass-produced item. We get something that is customized to our needs but doesn’t have the luxury price tag usually associated with custom-made products. While challenging, numerous different companies have managed to achieve customization with only marginally higher prices than standard products. In this post I want to look in more detail at how to achieve mass customization. 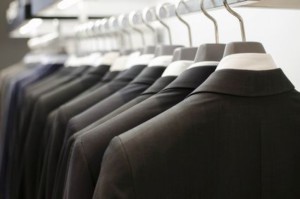 Mass production has been able to provide us with inexpensive and affordable products. Since every product is identical, it is possible to standardize, mechanize, and automate the process. Both machines and workers are able to work much faster and more efficiently if every part is identical. They can use the more efficient flow production.

This also applies to the suppliers, who can provide many, many identical parts much cheaper than would be a variety of different products. The economy of scale brings benefits along the entire value stream.

With cars, Henry Ford and his Model T is the best example. Through mass production of identical cars, he was able to continuously lower prices until every worker in America could afford a Tin Lizzy.

On the downside, the customer had very few choices. Henry Ford famously said that, “Any customer can have a car painted any color that he wants so long as it is black.” This was because black paint dried faster and hence could be produced more efficiently. The needs of the producer took priority over the needs of the consumer. 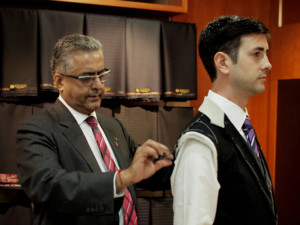 Customization is the opposite of mass production. The customer gets exactly what he wants, individually customized to his needs. Of course, this takes time and effort as well as significant expertise and hence raises the price tag significantly. For example, a mass-produced suit can be as low as $200, whereas a custom suit can easily cost ten times as much. 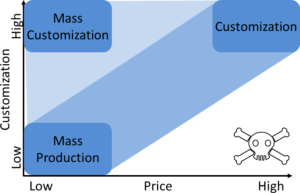 Before talking more about mass customization, I first would like to note that there is a wide area between mass production and mass customization. Many companies make different trade-offs between price and customization, and still have a good business model. Hence, there are not only two corners of the playing field, but many in between.

The idea of mass customization aims for the third corner of both low prices and high customization. And again, there are many options in between. Already, many companies achieve a high level of customization at prices close to mass production.

For completeness sake, the fourth corner is the death of a company. If your products have less customization and higher prices than the competition, it will be very difficult to have a good business model. You have a significant risk of ruining the company because the competition is better. Unless you have another significant advantage (quality, brand image, monopoly, etc.), your company will shrivel and die.

How to Mass Customize 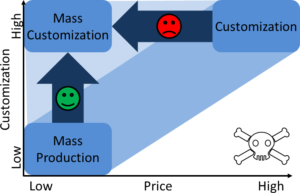 To achieve low prices, you do need a high level of automation. I strongly believe that without automation, you cannot achieve the low prices of mass production. Often, however, automation reduces flexibility. For mass customization, you need automation that is flexible enough to support the options you want to give your customers. In any case, investing in automation makes only sense if you produce large quantities. The larger your output, the easier it is to move toward mass customization.

At the same time, you cannot give the customer total freedom. You have to limit the choices but also offer so many choices that it feels like customization. When selecting a car, you have different options for engines, seat covers, or entertainment systems, but you do not have complete freedom. If you really, really want your pink ostrich leather seat cover, you probably still can get it, but no longer at mass production prices.

One approach to mass customization is modularity. This is often used by car makers. Many modern car models share identical components among each other. Hence, each component or module is used more often. The modules then can be mass produced using conventional mass-production techniques. The development cost can also be spread over the larger quantity. Only during the final assembly is the final customized version of the car produced. Much effort goes into creating a flexible final assembly line that can handle such a wide variety of different products.

For example, it is estimated that BMW sells, on average, only two identical cars on of every variant per year. Toyota, Peugeot, and Citroën even share this across companies. The Toyota Aygo, Peugeot 107, and the Citroën C1 are all based on the same car, with only minor cosmetic modifications. In the image below, the cars are almost identical except for the front design, and they have mostly identical components under the hood.

This is used, for example, by Volkswagen, where they call it “Modularer Querbaukasten.” They are currently building or plan to build a wide range of vehicles always using the same modified base. However, rumors say that the benefits so far are below expectations. Here is the list of current and future models using this platform:

You can also mass customize products if there is much similarity. For example, when producing clothes, the basic pattern stays the same; you merely scale the clothes or parts of it up or down to conform to the body type of the customer. You still need automation, as hand crafting is either expensive or takes too long to ship. Since you need automation, you also need volume to make the automation worthwhile. The customer will get clothing that, while not quite custom, fits better than mass-produced clothing, but with a price tag closer to mass production than custom.

In general, if you have an automation system that can be programmed to flexibly adapt, you have the potential to automate the customization and therefore reduce the price of customization.

There is also soft customization, where, instead of the product, the services around it are customized. Long-distance flights, for example, nowadays no longer offer the same movie for everybody, starting at the same time; now you can select from a library of options and start any movie any time.

Depending on how you do it, this may also be an option. On the other hand, if ill implemented, this can also backfire. For example, my bank recently contacted me and told me that as a loyal and valuable customer I can now set the duration before my online banking logs me out due to inactivity. For me, that is about as helpful as an eleventh toe.

There are many companies that move toward mass customization. Besides automotive (which has done it for decades), there are many other industries. For example, the German company Mymuesli sells a higher-end breakfast cereal mix, but also gives the customer the option to design their own muesli mix. From hundreds of potential ingredients you can choose which ones you like, at a price only marginally higher than the premixed cereals from the same company.

Apparel companies are also starting to offer customization near mass-production prices. The customer either measures themselves or gets scanned in the store. The company then uses automation to tailor a custom-made piece of clothing that fits. Levi Strauss started this idea back in 1994. Today, a custom-made NIKEiD sport shoe costs only 20% more than a mass-produced one. Even printing your own photo or design on a T-shirt costs little more than a mass-produced T-shirt.

Yet another example of the modular strategies is desktop computers. Within the standard housing, you can mix and match a wide variety of components to get just the computer you want. This was for a long time the strategy of Dell.

There are many more examples in industry, and I am sure you know more too. Hopefully, this post helps you a bit if you want to move toward mass customization. Now go out, satisfy your customer, and organize your industry!

P.S.: This blog post was inspired by a question by Peter Meissner (name mentioned with permission)

P.S.S.: The structure of this article is intentionally different from the well-known and often-repeated Harvard Business Review article “The Four Faces of Mass Customization” by James H. Gilmore and B. Joseph Pine II, as I don’t find their structure too helpful for the situations I encounter.

2 thoughts on “Strategies for Mass Customization”