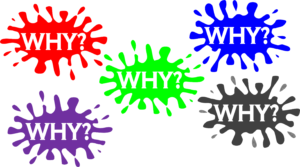 If you’re doing lean, you will encounter people telling you to do “5 Why” everywhere. And the method sounds simple, just ask “Why?” five times to find the root cause of a problem. However, there is a surprising amount of depth to this, as well as some pitfalls. Let me elaborate:

The technique of “5 Why” can be found everywhere on the web. Googling “5 Why” gives slightly over 3 million results. The basics of 5 Why is rather simple. You just ask the question “Why?” five times to find the root cause of a problem. This is often illustrated with a simple example like: 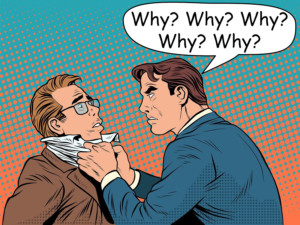 This technique is popular in literature, and also with management, at least in theory. While some sources describe it in more detail, many others oversimplify the process, in which case it may look like this: The manager simply asks the subordinate “Why?” five times in a row, after which the subordinate has found the root cause and can get to work fixing it. There is no mental involvement needed for the manager. If it were only that simple …

The Proper Way to Ask Why

What Kind of Problems Can Be Solved with 5 Why?

5 Why is a technique that follows a path rather linear to a single root cause. Hence, it is usually best with problems that probably have only a single root cause, or at least very few root causes. The more possible causes a problem has, the more difficult it will be to use this method.

For example, if your problem is “Our company is not making money!” 5 Why may not be the right method. While it will eventually lead to one answer, it is highly doubtful that this is the most important one, and in all likelihood it is not the only cause. In this case, other methods like fishbone diagrams or brainstorming may yield better results.

As always, before setting out to solve a problem, make sure it is a relevant problem! In your work, you will encounter a myriad of problems, only a few of which you can solve.  Invest your time and the time of your people in a problem that will make a difference for your company (see, for example, my post How to Manage Your Lean Projects – Prioritize).

And, as always in lean, whenever possible go to the site of the problem and have a look directly at the current situation: Go to Gemba! (many thanks to Thomas Meyer for the suggestion)

Who Do You Want to Ask?

5 Why can be done with a larger group, one-on-one, or even by yourself. The people involved need to know about the problem and have the ability to analyze its causes. It is okay to ask the mechanic in charge why the machine breaks, but it would probably not help to ask the accountant.

Evaluate and Verify the Answers 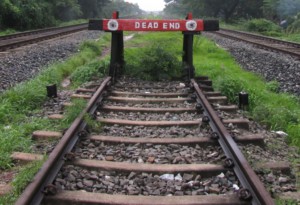 The success of 5 Why depends a lot on the quality of the answers. If the answers are guesses, then the outcome will be random. Let’s take the example from above, “The car will not start,” where the first answer was “The battery is dead.” If this is correct, the path of the questions will continue successfully. However, if the answer was wrong, and the car was out of gas, then you will end up with a false root cause. Changing the maintenance standards for the battery will not help you with an empty gas tank.

Another popular answer (at least in Germany) is to blame someone else. “The car will not start. Why? It is the fault of the other person/department/company/etc.” This, of course, is not helpful. Focus on the process, not the people.

Also, causes are often mixed up with symptoms. Make sure that with each why, you get the next cause of the problem.

Hence, with every answer you and/or your team needs to verify if it is correct, useful, and the only or at least the most likely answer. In some cases this may be obvious; in others it may require some testing and data collection. 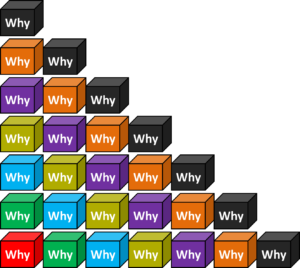 The method is known as 5 Why, and most examples show exactly 5 whys. However, this is only a rule of thumb, and also a catchy name (“6 Why” feels odd). In fact, I rarely exceed 3 Why. Maybe my mind jumps over steps. Take again the example from above, “The car will not start,” where the first why could already be: “Why? The alternator belt has broken,” followed by “Why? The car was not maintained.”

Hence, the number of whys can be flexible! More important than the number of whys is knowing when to stop. You should continue to ask why (and verify the answers) until you arrive at an answer where you can fix the problem for good. Often, 5 Why ends when an answer points to a process! A part can be fixed, but this fix is only good until the part breaks again. Changing a process, however, is much more likely to prevent the problem from arising again.

Also, if your last “Why?” ends up pointing to the fault of an employee, it may be worthwhile to ask “Why?” at least once more. A mistake by an employee is often due to lack of training, lack of time, lack of tools, overwork, or other organizational causes. Thanks to David Norby for the suggestion.

Another common problem with 5 Why is multiple root causes. A given problem may have more than one cause that contributes to the problem. It is possible to track these branches and ask “why” questions following up each individual branch. However, the more branches there are, the more cumbersome it will be. Hence, as described above, 5 Why is usually best suited for problems with few or even one possible root cause.

After going through the 5 Why, there is also a test going back in reverse. This is called the “therefore” test or “So what” test. This is a test to check the validity of the answers. While not foolproof, it may help you to make sure your logical chain is correct. Using the example above it would look like this:

(Many thanks to Phil Ledbetter for the suggestion!)

5 Why is good for problems with few or even only one root cause. However, often you don’t know beforehand about the root causes. If you do know the root cause, the whole process of finding the root cause in the first place may not be necessary. This brings me to the formality of the method.

Hence, I believe this method is not suited as the program for a formal workshop, but more as an internal method for the moderator. Do not announce that you are doing “5 Why,” but instead just do it as you see it fit! It is, after all, only an aid to help you dig deeper. It also should not be your only tool in your toolbox in finding the root cause, but should be combined with other approaches. 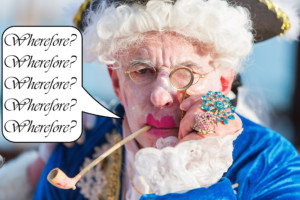 At least in German you can vary the wording, where “Why” can be translated to “Wieso,” “Weshalb,” “Warum,” and “Weswegen,” giving you already four variants for the five whys. In English, however, you are stuck with “why.” The only other variant I know is “Wherefore,” but this is terribly archaic, and you should avoid using it unless you habitually wear a frock and a monocle. Nevertheless, try to get some variation in your questions or risk sounding like a nosy kid.

5 Why to Find the Root Problem

5 Why is one of many methods to find the root cause for a problem. However, I also use this frequently in the other direction to find the root problem to a given solution. When I talk with managers on the shop floor, I often ask them what they consider to be their biggest problem they want to address. And all too often, I get a response like: “We want kanban.”

Ding-ding-ding – WRONG! Kanban is a solution, not a problem. I am a firm believer in starting any lean activities from a problem. Just copying the solution of someone else will fail. And kanban is a solution that may or may not fit the problem at hand. Hence, I often find myself going 5 Why in the other direction, for example like this.

You get my point? Sometimes you first have to find out what is really the problem before solving it.

Let me also quickly introduce a method that sounds similar but is for a different purpose. 5 Why is sometimes abbreviated as 5W, but this risks being mixed up with 5W and its variants 5W1H and 6W. The 5W (or 6W) and the 1H stand for

The sequence is, by the way, not standardized. Nor is the exact list of questions.  Some users prefer “To whom” over “why”, or add a second H with “How much“.  There are lots of possibilities here, too, to fit this method to your needs (Thanks to Koen van Dam for the suggestions). This is not so much a method for root-cause analysis but rather a structured set of questions to get the overview of a situation. This set of questions covers the breadth of a topic rather than the depth. As such it is also useful, but for a different purpose.

5 Why on its own is a quite limited tool. It is also not suitable as the main structure for a full-blown formal workshop. However, as an underlying approach to dig deeper for the actual root cause, it is quite useful. As with most lean tools, it is not so much the tool as the skill of the user that determines the success. Now go out, keep asking why, and organize your industry!