There is broad agreement in industry that a pull system is in almost all cases better than a push system. The most famous way to establish a pull system is to use a kanban system. The idea of kanban is so much associated with pull production that the two terms are sometimes even used synonymously. However, there are other ways to implement pull. Another useful approach is CONWIP, standing for Constant Work In Progress and developed by Mark Spearman and Wallace Hopp in 1990.  In this small series of posts, I would like to go into the details of CONWIP and its similarities to and differences from kanban. This first post will explain the basics, the next two posts will go into more details by answering some frequently asked questions, and the fourth post will discuss advantages and disadvantages of CONWIP.

Kanban is both a type of card and a control system in manufacturing named after the cards. Both were developed by Toyota in Japan. There are a limited number of cards, with each card representing a certain part type and a certain quantity (at least one). In the picture below, we have cards for green squares, red diamonds, and blue hexagons.  The kanban can be attached to a part or be separate. Every part must have a kanban attached with it. 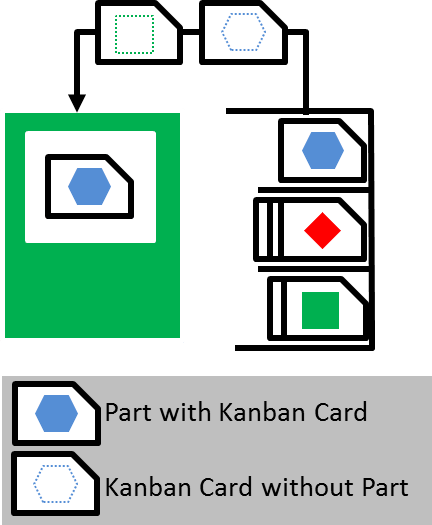 Assume you have blue hexagons in stock, each with a card attached. If someone takes out a blue hexagon, the card is removed from the part and goes back for reproduction. A card without a part arriving back at the beginning of the loop is an order to reproduce this part. Hence the card eventually comes back to storage again with a newly produced part.

This is a kanban system in its simplest form. Of course, there are numerous additional details like how many cards to use, various prioritizing and grouping options of the cards for reproduction, and detailed usages of FiFo lines and supermarkets. For detail, see my numerous posts about kanban. 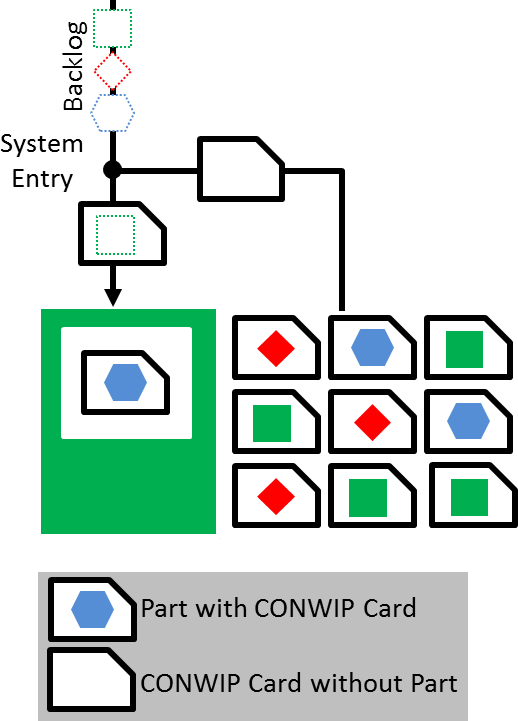 Completed parts all have a CONWIP card attached. If the part leaves the system (e.g., it is sold, used downstream, etc.), the card returns back to the beginning of the loop. Remember, the card is now not associated with a part type, only a constant quantity. On its way to the beginning of the loop, it meets the backlog. The backlog is a list of part types and quantities that need to be produced. The first part in the backlog is the most urgent one. If a CONWIP card comes back from the finished goods inventory, the next part type in line is assigned to the returning card. The card is hence a signal that capacity is available, and the backlog defines what to do with the capacity. The merging of the blank card with the part type is called the system entry. This part then gets reproduced and eventually makes its way back to the finished goods of the loop.

Hence a CONWIP card is like a kanban card, except the part type gets assigned only on its way back when it meets the most urgent demand in the backlog.

The Matchmaking – Merging the Backlog with the CONWIP Card (A.K.A. System Entry)

A CONWIP card by default does not include a part number. The part type to be produced is defined when the CONWIP card returns back to the beginning of the loop. There the card meets the backlog queue, a list of different part numbers that are waiting for production. This backlog queue is sorted according to overall priority. The most urgent products are produced first, as soon as a CONWIP card becomes available – if there is material available.

Naturally, no matter how urgent the part, if you cannot get the material there in time, there is no point in starting production. Spearman et al.  also suggest to write down the date and time of the matchmaking on the card, which can help determine the throughput time and also the sequence of production in the system. However, in this case you need to think about what happens to the CONWIP card after multiple rounds. Do you have enough space for many entries? When do you replace a card with a new one? It is doable, however.

Someone has to determine the backlog sequence (i.e., decide which part type is more urgent than the other one). Spearman et al. suggest the production and inventory control staff. I would phrase it more generally as the people who know the urgency best. It could be, for example, some type of clerk in the production planning or production control department, or a supervisor within manufacturing for internal supply lines. In modern manufacturing, the sequence will probably be primarily based on the available MRP data, combined with additional information through telephone or e-mail.

Please note that this sequence is by no means fixed once it is created. In a usually highly volatile environment such as a manufacturing system, new information comes up all the time. Customers may order more or cancel orders. Material availability may also change.

In short, a CONWIP system is like a kanban system without part numbers on the kanban. Instead, the product type gets assigned to the card on an as-needed basis. In the next post, I go into more detail about selected specifics of the CONWIP system and will answer some frequently asked questions about CONWIP. In any case, I find the CONWIP system useful, especially for made-to-order pull production. I also hope you enjoyed this post. Now go out and Organize your Industry!

Overview of CONWIP posts in this series

4 thoughts on “Basics of CONWIP Systems (Constant Work in Progress)”