A few weeks ago I wrote an article on the Cuban economy, focusing on commerce (See How a Planned Economy Can Screw Up an Entire Country – Analogy between Cuba’s Communist Economy and Push Systems). On the same visit I not only saw supermarkets, but I also had a look at industry. Unfortunately there are no visitors allowed in their government factories. Nevertheless, I was able to catch some glimpses of different industries.

The State of Industry

There never was much manufacturing in Cuba. Even before the revolution, the economy was based mostly on agriculture and tourism. Nowadays, it is mostly tourism and also some export of sugar, ores, oil, beverages, and some creams and lotions. Below I show some examples of different industries in Cuba, as well as the consequences for the average life of the Cuban people.

Before the Cuban Revolution, Cuba was a major producer of sugar, usually financed by US investors. One of the largest sugar mills was built by chocolate king Milton Hershey in 1918. He also added an electric train for transportation between Matanzas and Havana. Furthermore, he built a new model town Hershey with houses, healthcare, education, and recreational facilities for his workers.

After the Cuban Revolution, the government took this large factory over. Starting then, it ran almost continuously with little maintenance, until even Cuban ingenuity and duct tape could no longer hold it together (and falling sugar prices did not help). The factory was closed in 2011, after almost 100 years of operation, half of which with little to no maintenance.

Since then, the former grand sugar mill is falling apart. Entering the rusting hulk is dangerous, as every now and then an old piece of machinery crashes through the rusting floors. At least the electric train still runs, although no longer with the original cars. Yet, even the new(er) trains are falling apart, and I had a good view of the tracks underneath through a gap in the floor.

Cuba has access to oil fields but does not manage them very well. As a result, Cuba is a net importer of oil. The oil pumps used by the government are old-style pumpjacks, used for wells with little oil.

However, there is quite a bit of oil under Cuba, if you can get it. While Cuba does not have the technology or know-how, China does. The Chinese Great Wall Drilling company operates a number of different wells in Cuba, all of them technologically much more advanced than Cuba’s old pumpjacks.

Popular legend has it that Cubans are the best mechanics in the world, since they can fix almost anything using almost nothing. This maybe true for private items that are valued. However, government items are still often neglected.

During my stay I visited Matanzas, the province capital. Here I took a boat trip along a nice river. Interestingly, the company had five large boats, two of which sunk. One is still sunk since quite some time ago. Another one was recently raised, although estimating from the crust of barnacles on the hull it also spent quite some time under water.

The image on the left shows four of their five boats (the photo was taken from the fifth one – which luckily did not sink – yet). It looks like both boats sank due to neglect, and no one has bothered to lift them or fix them. Since they are government property, they belong to everybody, and hence no one cares.

Cars, on the other hand, are often private property, and keeping them running is not only a source of pride but also a source of income. In that aspect Cuba is famous for its many antique cars, mostly dating to before the Cuban Revolution in 1959.

It is one of the joys as a tourist to look at these cars and also ride them (never mind the lacking seat belts, the outdated crumple zone, missing airbags, and the long-since broken safety glass being replaced with normal window pane glass that gives sharp shards). Curiously, no matter if it is an old-timer or one of the newer government cars, I have never seen a working speedometer in any car.

Yet, while the bodies of the cars may date (mostly) pre-1959, the engines do not last that long. Hence, whenever you look underneath of the hood, you will find a modern engine. It must have been quite a task to fit a modern engine into the ancient bodies. These modern engines are all hand-me-downs from the Cuban government, which sells its old engines to the general public. As with any socialist system, if you belong to the government, you still can get almost anything you want.

In any case, his “Mercedes” engine promptly broke down due to a coolant leak. While I don’t know if Cubans are the best mechanics in the world, my driver was able to fix the problem using a knife, clamps, and some rubber.

In terms of prestige of engines, after Mercedes and Toyota, Mitsubishi and Hyundai are number three and four in popularity. But here, too, another driver of a 1955 Chevrolet insisted his 1998 engine is Mitsubishi, even though it clearly said Hyundai.

Effects on the Population

The lack of goods and spare parts forces additional efforts on the  population to make ends meet. Things that we take for granted are anything but in Cuba.

For example, I chatted with one waiter at a restaurant. She told me that she has raised a pig to buy a gas stove. (Raising pigs for money is a very popular Cuban pastime.) She did not want a big stove, since it was too expensive. Instead she wanted a small tabletop version. For three days she searched in three different cities and found none. Not even close.

Eventually, she found a medium-sized stove. Although it was more expensive, she bought it anyway, since she did not want to waste time searching any longer. Now she is raising the next pig to buy the hoses, fittings, and a tank of gas. And the topper is that all of this was only necessary because the perfectly good electric stove she had does not run if the electricity is cut (often for hours), and she needed a backup stove for cooking. All this raising pigs and running around simply because of an unreliable electricity supply.

Another waitress told me that she had to walk 6 kilometers (4 miles) every day to work and back. I asked her why she did not buy a bicycle. Well, in fact she had a bike! A nice and expensive racing bike, in fact (worth about three months’ salary of around USD $75 each). Unfortunately, after the original tires wore out, she was unable to find replacement tires. The store had only the tires for men’s-sized bicycles, but none for the smaller women’s bicycles. Hence, the bike is in the shed and she walks. 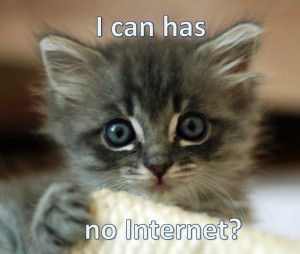 By the way, if you are wondering why she didn’t just Google it to find which store had her size bicycle tires or just order them online: they have no internet. The Cuban population (with the exception of some journalists, government officials, and tourists) is not online. No cute cat pictures for Cubans!

Since the official government salary is only around USD $20–$30 per month (depending on the job), everybody needs additional jobs or kickbacks (affectionately known as Sociolismo). A waiter earns around USD $1 per day, although tips – especially in tourist areas – often add USD $5 or more. With around USD $100 per month, life becomes much easier in Cuba. However, I have to point out that unlike many other poor countries, I rarely felt treated like a walking wallet. Despite being poor, Cubans are quite friendly to foreigners.

The Government Doesn’t Get It

Another story I have heard was that German sport fashion maker Adidas wanted to sponsor some Cuban sport teams by providing free clothes. Nice of them, wasn’t it? Well, the government officials decided that Adidas would have to provide clothes for ALL sports teams in Cuba or they wouldn’t accept any of it. Hence, no Adidas for Cuba. My guess is that Adidas should have just offered some samples to the official, and the magic of Sociolismo would have smoothed the way.

It is easy to see all the waste needed to work around the constant lack of materials. If the material is missing, you have to work twice as hard to achieve half the result. In manufacturing, push systems are somewhat similar, albeit on a much smaller scale. However, in modern manufacturing, you usually have less options to make do using duct tape and rubber if you’re missing the correct part.

These negative effects of socialist or communist systems onto the entire economy happen almost every time. I have also seen it while visiting (back then) socialist East Germany, and I have seen it in Cuba. I probably could also see it in North Korea, but heck no, I am not going there. That country is nuts! China and the Soviet Union also had it, but wisely they switched to a capitalist economy with a communist government structure. In any case, whenever possible try to avoid the waste and use pull systems. Now go out and Organize your Industry!