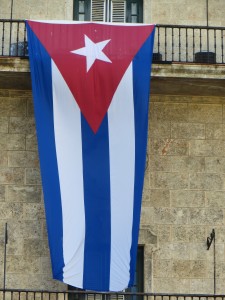 Over Christmas I escaped the cold weather in Germany and relaxed on the warm beaches in Cuba. Of course, being a lean expert, I was also interested in the Cuban economy. As a communist economy (or more precisely, a socialist economy), it is based on centralized planning. In comparison, the capitalist system of the US (and most of the rest of the world) leaves most business decisions to individual entrepreneurs. This is somewhat similar to push and pull in manufacturing. Push systems also rely on centralized planning, while pull systems have their signal from inside the system to match the customer demand. As capitalism outperforms communism, pull usually outperforms push. Hence, in this post I would like to show you the shenanigans that happen in Cuba due to the effects of centralized planning. Warning: Lots of images ahead!

A Very Brief Bit of History

Cuba was claimed for Spain by Columbus  in 1492 during his first voyage to America. After the Spanish-American War, Cuba became independent in 1902. In the decades afterward, Cuba prospered, heavily influenced by the US. By 1958 Cuba was one of the most prosperous nations in Latin America,  doing well even compared to the rest of the world. However, this was based mostly on natural resources (especially sugar) and tourism. There was little manufacturing, which was also hindered by strong labor laws. Nevertheless, lots of infrastructure was built, and the middle class approached an American lifestyle.

However, this all changed in 1959 with the Cuban Revolution. Among many other measures on their path to the communist ideal, the means of production were socialized. This included the often American-owned farm land, machines, and factories. As with all other communist revolutions, productivity dwindled and investments dried up. The American embargo that started during the Cuban Missile Crisis did not help the economy either.

While in 1958 the average Cuban earned 20% of the average American, nowadays it stands at only 10%. The official government salary is around USD $20–$30 per person per month, depending on your occupation. Even considering the lower cost of goods in Cuba, this is not enough to live, let alone to support a family. An active black market and Sociolismo (exchanging favors) outside the official system helps many Cubans to make ends meet.

Lack of Materials and Spare Parts

The planned Cuban economy is plagued by a constant lack of materials. Centralized planning just cannot do the work as well as Adam Smith’s invisible hand. Even to a tourist, who often gets priority treatment in the distribution of official goods, this deficit is obvious.

For example, there seems to be a shortage of paper towels (among other things). Hence, in the airport toilets, they added toilet paper to the paper towel holders. However, besides drying your hands, you also had to take some along beforehand for its intended purpose, since there was no toilet paper inside the stalls.

Another example was this sports field. It probably looked nice when it was built, but now it is falling apart. They lacked the spare parts (like a basketball basket, a volleyball net, or other things) to fix it, so it is now nearly unusable.

Cuba also had one of the first rotating bridges in Central America, opened in 1904. This bridge still stands, but apparently is no longer able to rotate due to a lack of maintenance and spare parts. Luckily, when the mechanism gave way, it was in the closed position. It still is one of the important bridges in Matanzas, the City of Bridges. In fact, pretty much all major bridges date to before 1959.

The State of Commerce

A common experience with push systems is that there is often too much of one product and too little of another. This is very similar to the communist (socialist) system in Cuba. The official stores often lack some goods while they have too much of another. For example, the “supermarket” may have had conditioner but lacked shampoo.

Another store got two pallets of beer delivered, much more than needed. Yet a third store had dozens of rice cookers for sale but lacked any other small electric items like blow dryers, mixers, or coffee makers.

Due to the mismatch between supply and demand, lots of small private stores and stalls are everywhere in Cuba. However, they also don’t have the necessary supplies. For example, the average shoe store in Cuba had around 50 pairs of shoes available. Please note that these are not different 50 designs, available in many sizes, but 50 pairs in total. Lucky you if you can find both a matching size and a design you like.

Even with basic food items like home grown pork, the selection is meager. No matter whether you go to the official shop or the private shop, there is not much selection.

The Horror, the Horror …

Okay, if you are, like me, an engineering-minded male, you may not feel the pain if there is only a limited shoe supply. For me, if the shoe fits and it is not ugly, then everything is fine. Similarly, I survive well even if I cannot choose from 40 types of shampoo. Actually, it makes my decision of which one to buy much easier.

But now, let me show you a store whose lack of selection really, really hurts – up close and personal! Here’s your friendly neighborhood hardware store:

That’s it! That is the selection in the largest hardware store in the province capital of Matanzas (pop. 150,000). They have only one shovel! The blue packages on the left are some leftover tiles (good luck in finding what you want). In the back they had a number of fittings and mountings in a glass vitrine, rather than the bulk containers with everything you are used to in the US and Europe. The entire store probably had less goods than half an aisle in the capitalist equivalent. Of course, if you like pink toilets, then you are in luck.

Here, too, small entrepreneurs try to fill the gaps. Across the street, a woman in an entrance of an apartment was peddling her plumbings (and I mean this in a purely technical way). Three houses down, a small merchant offered some more u-bends, electrical junctions, and – to fill up the assortment – kitchen ladles. Even so, the selection was pitiful.

Some Things Are Plenty

On the plus side, if you want to drown your sorrows over the lack of tools, the supermarkets are usually pretty well stocked with drinks, especially Cuban rum, but also other brands, including Heineken.

Another thing that is readily available is cigars (good ones or fake ones with cheap tobacco). Furthermore, bookstores are also well stocked. That is, if you are interested in one of the three available sections: children’s literature, the glory of Cuba, or the history of Cuba. No Hemingway books in Cuba. 🙁

Finally, T-shirts are also common, especially with tourist motives like Che Guevara or Havana Club. However, there are no T-shirts with Fidel Castro. I have been told that he has to be dead first before they can print him on a shirt. Fridge magnets, however, are perfectly fine with Fidel and his beard. Don’t ask me why; I don’t get it either.

Overall, as push production can mess up both your inventory and your delivery performance, even larger planned economies like Cuba can make a mess out of an otherwise reasonable country. Cubans have relatively good education, no civil war, no major disasters lately, and a stable (albeit socialist) government. Usually, these are all good signs if you want to put an economy back on track. It is only lacking the invisible hand to guide them, and the very visible planned hand does not guide their economy very well. (They also have a bit of an embargo problem, which hurts them financially. But they could still get stuff through Venezuela and other countries.)

Personally, I hope they eventually get their things together and also manage to get along better with the United States. I also hope that you enjoyed this article, since it may have consequences for me. If the Cuban security apparatus reads this, they may notice a lack of praise for their Cuban economy, and also a lack of condemnation of the “capitalist imperialist pigs”  (i.e., everybody north of them). In sum, I may not be able to go back there for a holiday. At least until the next Cuban revolution, that is. In the meantime, go out and Organize your Industry (and also enjoy the variety of goods the next time you are shopping).