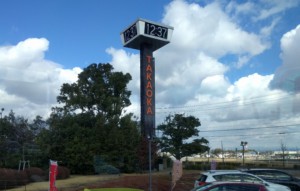 Toyota pioneered the concept of having multiple models on the same assembly line, with such lines being common at Toyota already in the 1990s. Many tricks, like a triangular clamping base that simply rotates depending on the model, were used. A common platform nowadays also helps. This is commonly called a flexible assembly line.

Toyota is starting to roll out a new type of assembly line, where the flexibility is not (only) in the car models that can be made, but in the ability to change the line itself. The line can be made longer or shorter, and its routing can be changed. Toyota developed the concept in the last few years. I first wrote about this new type of flexibility four years ago, in early 2018, in my post Continued Evolution of the Toyota Assembly Line, which was already an evolutionary step from adding small buffers in the line. But it is time for an update. Toyota is using this new type of flexible assembly line in the Takaoka plant at line #2.

Why Do You Want to Change Your Assembly Line? 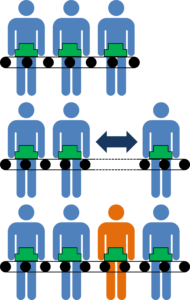 Flexibility allows us to handle fluctuations (mura). If possible, you should reduce fluctuations. However, if the fluctuations come from the customer, it is not always possible to reduce them, and then you have to handle it. The old type of flexible lines allowed multiple models on the same line, allowing the shifting of available capacity among different products, in the hope that a higher demand of one product is compensated by a lower demand of another product. The new type of flexible line allows the ramp-up and ramp-down of the capacity of the ENTIRE line by making the line (or critical segments of it) longer or shorter. Hence, one reason for such a new flexible assembly line is to adjust capacity to the changes in demand easier. This can also be done by increasing and reducing the work time (with the hard maximum limit of “around-the-clock” production). But it may be better to keep working times more stable, avoid an unpleasant and expensive third shift, and instead change the line.

A second reason is design changes or new models. Let’s make an example. Assume your assembly line is optimized for your current product line-up. On this line, the dashboard installation has just as much space as it needs. But now there is a model or design change, and the dashboard installation requires more time (e.g., you add a heads-up display). You can’t add more people, since there is no space. If you run the line slower, all other people on the line will have to wait for the slower dashboard assembly, and your capacity goes down too. If you want to create space, you have to rip out all the machines, move them by two meters, and put them back in, which will be expensive…unless you have a new type of flexible line where you merely unplug and pop up the machines, move them two meters, put them down, and plug ’em back in. Hence, this flexibility allows you to adjust the line layout to changes in a stations workload.

Finally, what if your wheel-installation robot has a serious breakdown, and it will take a week to get spare parts and fix it? Do you stop the line? At a new flexible assembly line, you can simply remove the robot from the line and add a few people who can take over until the robot is operational again. Hence, you may be able to quickly replace broken machines/robots with human workers and vice versa. Toyota believes that the flexibility of human operators is often worth the cost compared to a machine.


Examples from Other Companies 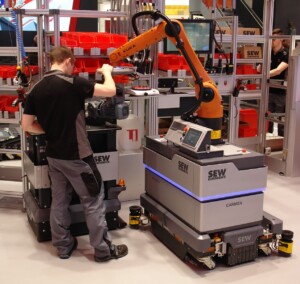 I have seen similar examples at other companies, albeit on a smaller scale. At Bosch in Budweis, fifteen years ago, they put their machines and tools on wheels, plugging in electricity, pneumatics, and water, etc. from overhead supplies. Rearranging the lines was a breeze. However, these were for small parts (e.g., for inside of a gas tank), at a manual assembly line, and the machines were at most the size of a fridge. Yet this setup gave them a huge flexibility to rearrange their lines in the quest for even more efficiency and optimization. On the other hand, the audit and assessment of their lines by the automotive customer was a paperwork hell, as many were hesitant to accept a line that could change quickly. But they managed.

Another example is SEW Eurodrive, which started to use AGVs not only for transport but also as the platform for assembling their products (industrial gearboxes and other). They claim an increase in lead time and an increase in flexibility. I am a bit unsure on the financial side, however, as each mobile robot is much more expensive than a previous conventional assembly station. But it seems to work for SEW Eurodrive. 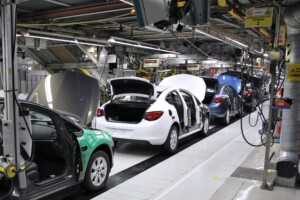 Both of these examples include comparatively small parts that can also be moved by hand if needed. Change is much more difficult for car assembly. Cars are bigger. Hence, the machines are bigger. There is also often a lot of overhead structure like transporting car bodies, doors, and other stuff. Below is a model of a conventional Toyota assembly line.

Toyota is changing that – first at a pilot plant north of Sendai, and in a full-scale implementation at one of their main plants, with line #2 at Takaoka. The cars at the Takaoka #2 all move on AGVs, going from workstation to workstation. Machines are still bolted to the ground, but they no longer need large holes in the floor to place them. Instead, they are often on wheels for easy movement. One thicker cable is used instead of many small ones. Moving machines and the material flow around is easy. There is no overhead structure that would need expensive reconstruction. The lights and ventilation pipes (and a roof, of course) are usually the only things over the line. Below is a model of such an improved Toyota assembly line.

The cost of the new Takaoka #2 line was half of that of the conventional #1 line, albeit I don’t know how many cars the #2 line can make.

How to Use The New Flexible Line

Toyota uses this new flexible line at Takaoka #2 as a complement to the conventional Takaoka line #1. #1 works best with 200 000 cars per year, and any change to that makes the line less efficient. Any excess demand is handled using the new flexible line #2, which is still efficient even with changing demand. This also means that a lot of the space in the Takaoka #2 hall is frequently empty.

It is still a bit of work to change the line. But instead of weeks, a change is done during the weekend. Below are the before and after photos of such a change at Toyota over a weekend.

A changeover is also done quickly. Whereas other plants in the world often take weeks to establish a new model, at Takaoka #2 it is supposedly done while the line is running (although this probably does require a lot of preparation). Overall, a very interesting concept, and I hope to learn more about this in the future. Now, go out, make your line more flexible in any way you can, and organize your industry!

Inside Toyota’s Takaoka #2 Line: The Most Flexible Line In The World, TheDrive.com