The Toyota Motor Company (TMC) is one of the most well-managed firms in the world. Among multinational corporations, it is probably the most famous one. Since its founding in 1937, TMC has continuously improved. The question is, how did Toyota do that? What does Toyota do differently from other companies, who stumble from one problem into the next? I believe the corporate culture and style start with the behavior at the top. Hence, in this post I will look at the board of directors of TMC in more detail.

The Toyota Board of Directors (as of 2013) includes 23 individuals. Looking at their biographies in more detail shows a high degree of uniformity.

Unsurprisingly, all but one of the members of the board are Japanese. The only exception is Mark T. Hogan, a former director and vice president of General Motors. Hence, the board is 96% Japanese. Similarly, all but one are male. The only female is Yoko Wake, a professor at the prestigious Keio University who also serves as one of the three outside members of the board. Again, this makes the board 96% male, and the lone woman is merely an outside member. I believe the lack of females on the board may be a weakness, as is the lack of international members. However, I did a very similar analysis ten years ago, when there was no woman and no foreigner at all; hence, overall it is an improvement, albeit a rather slow one.

Typical Resume of a Board Member

The typical resume of a Toyota board member goes like this: graduated from university, joined Toyota the month after graduation at age 24, stayed with Toyota forever. Excluding the outside members, 15 of the 19 board members joined Toyota directly after graduation at an average age of 24 and then stayed at Toyota for 38 years. Their average age is 62 years. 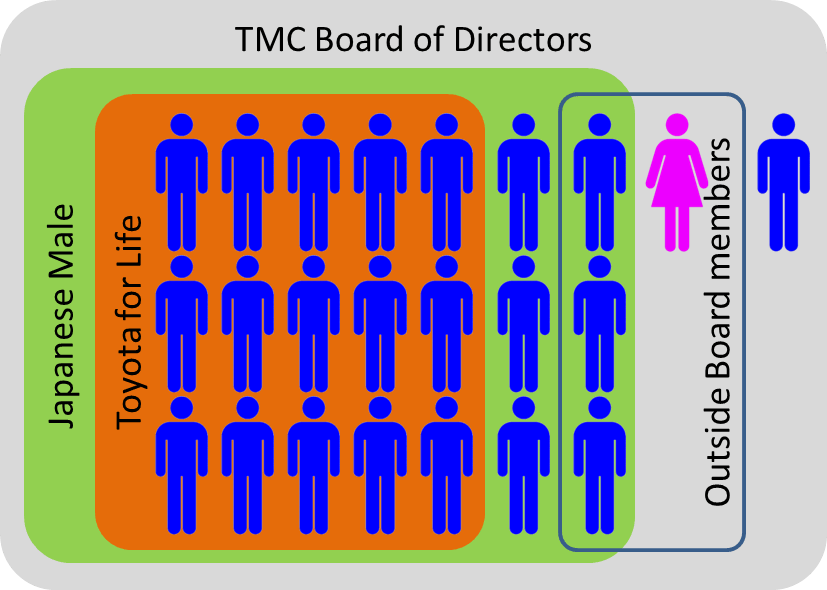 There are only four exceptions: Nobuyori Kodaira and Haruhiko Kato, who were both previous high-ranking government officials in the Ministry of Trade and Industry (MITI) and the Ministry of Finance respectively. Of the remaining two, Ikuo Uno was formerly president and chairman of the Nippon Life Insurance Company, and Mark T. Hogan was at GM as mentioned above. It is curious to see that there is only one industry insider, Mark T. Hogan, whereas everybody else who joined from outside is from the government or an insurance company. It probably is good to have political connections in Japan too. But I find it more amazing that almost 80% of the board of directors know only Toyota, but then know Toyota very well.

The typical rise through the ranks at Toyota starts with six months of working on the assembly line – regardless whether you are an an engineer, business manager, physicist, or anything else. Everybody gets to know the basics. From then onward, the typical Toyota manager is put on a journey through all areas of the company, from purchasing to sales, from manufacturing to human resources. This journey also encompasses other companies of the Toyota group. In the end, the manager knows all aspects of the business. I believe this allows Toyota managers to make better decisions when compared to Western managers, whose resumes jump between completely different industries and who often lack knowledge about the undesired side effects and consequences of their decisions.

“Toyotaness” of the Toyota Managers

The average board member is with Toyota for 38 years. Such a long tenure is nowadays rare in the Western world, especially among high-ranking managers. I believe the adherence and identification with the company benefits from such a long experience at the company. In the West, I get the feeling that for some managers it is “just another job,” whereas at Toyota the company is everything. Not only do they know more about the undesired consequences of decisions, but they also care more about their company.

I did a similar analysis to this ten years ago. Back then, all but one were home-bred Toyota insiders. Only one joined the board from a high-ranking government position. Of course, all were Japanese males. With currently four members coming from outside of Toyota, there is a very slow trend toward outside members, albeit with such a small number this may also be coincidence. The non-Japanese aspect, however, is almost certainly not a coincidence. A foreigner doesn’t just pop up on the board by accident. Hence this must be by design, probably following a lengthy internal discussion process.

I think it is highly beneficial for Toyota to have board members with such an extreme experience working at Toyota. Continuing this would probably help Toyota (albeit some recent changes create another risk, see Internal Threat to the Toyota Production System Due to New Hiring Practices).

However, Toyota could also benefit from more non-Japanese or female members to give different perspective.

The main source for this data was the Toyota Annual Report 2012. The members are listed below, with some notable information highlighted.

Executive Vice Presidents, members of the board

Audit and Supervisory Board Members

Outside Audit & Supervisory Board Member