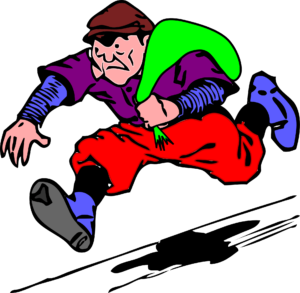 Most of the material you purchase eventually goes (hopefully) to the customer. Some will be waste, others may be scrap. Yet a small part is also likely to be stolen, probably by your own employees.

In this post I will look at the effects of theft and give you some industry examples.

Where Does Your Material Go?

In classical business management theory, there are three possible ways your purchased material can end up:

What business management books usually miss is a fourth way how material can leave your plant: Theft! 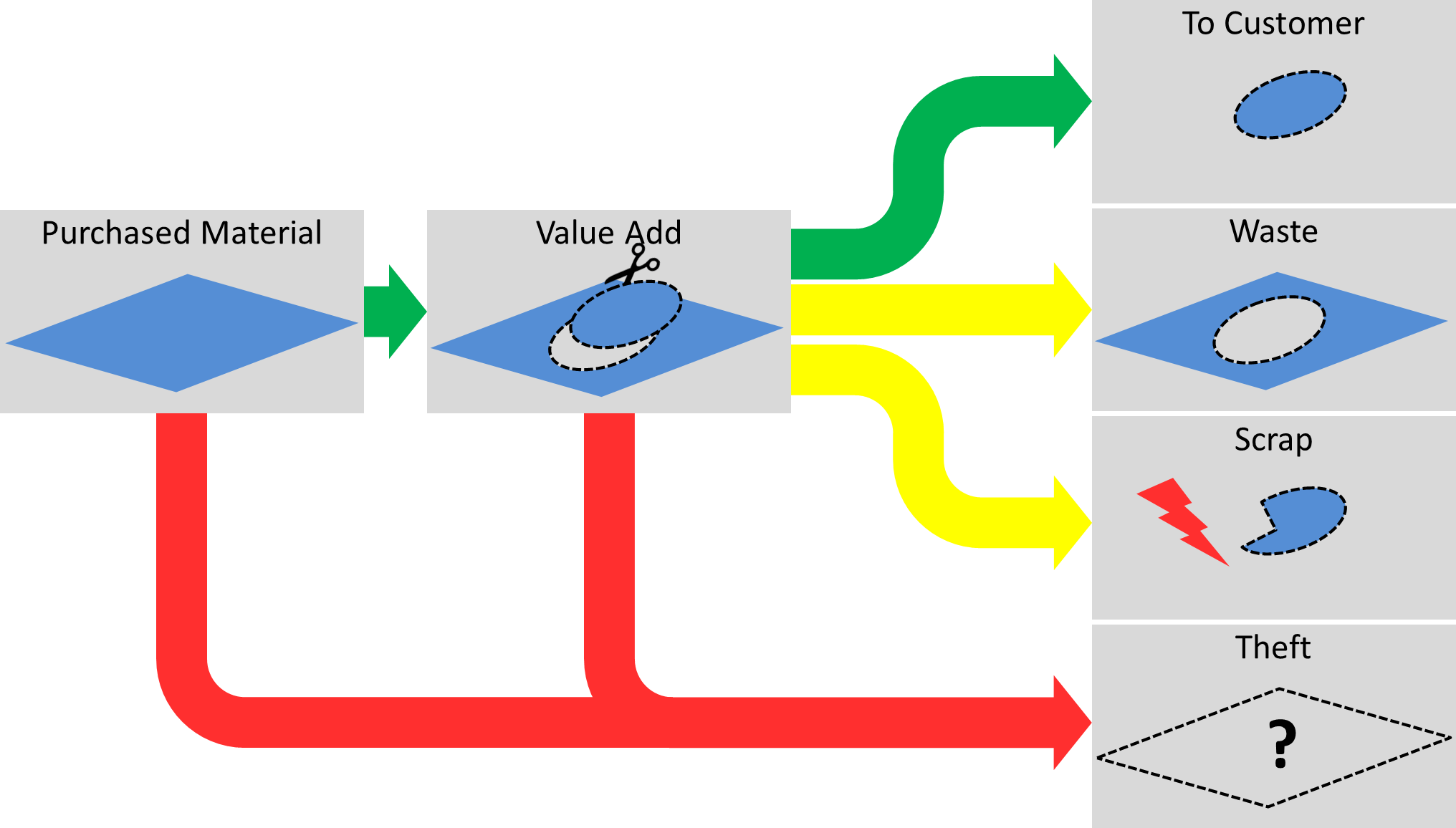 Who Is the Culprit?

In all likelihood, the material gets stolen by your own employees. Nobody knows the internal details as well as the people who work there. Only in retail is theft by others a larger part of the shrinkage. Even if the goods are stolen in transit, it is likely that an insider snitched which shipment to steal.

Detailed statistics are rare, as most companies are not even aware of the issue. Even if they are, this is not something they make a press release about. Of course not every employee is a thief, but I believe most larger plants suffer at least somewhat from theft. Also, while the following examples are mostly operator-related, please be aware that being a manager does not make someone honest automatically, although in my experience higher-ups usually prefer accounting tricks with, for example, travel expenses rather than stealing from the shop floor. In any case, it is usually the minority that steal, and most employees are honest.

Historically speaking, this theft was (at least from the workers’ point of view) a regular and accepted part of the salary. No matter if it was a paper mill or a weaver in the putting-out system, material theft was widespread. Often, due to lack of supervision, the worker produced goods for his own ends using time, material, and tools by the employer.

It is estimated that in the Arsenal of Venice, the largest industrial site in Europe during the Middle Ages, around 60% of all wood for shipbuilding was stolen before it made it into a ship. Other large shipyards even had a rule that the worker was allowed to take wooden chips home. Mind you, a “chip” was any piece of wood with a dimension of less than 1 meter! Plus, the workers interpreted the rule as “every member of the family of the worker could carry away any wood shorter than 1 meter.” No surprise that all windows, doors, benches, etc. in the neighborhood  were just about 1 meter wide.

Why Is It Stolen?

Often, most stolen parts are small things for own use. For example, zip ties have a low perceived value but are quite useful. Plus, they fit in any pocket. Hence, they have a habit of disappearing. Some plants routinely order more zip ties than they need to make up for the shrinkage. Many employees don’t even realize that taking even such little things as zip ties is theft!

Even more common is the theft of stationary. Pens and paper seem to vanish with astonishing frequency. Stationary stores would probably double their revenue if everybody would by their own pens. Another example I know of was the theft of cutlery, on the average the equivalent of three spoons per employee per year.

Another example was a commercial logistics center shipping all kinds of goods for many different customers. When I arrived at the site, I was surprised to see a full pallet of chocolate cookies in the middle of the office, with around 500kg of cookies on it. I was informed that this fell off the forklift, was now an insurance case, and the employees just helped with an environmentally friendly disposal of the damaged goods.

You would be surprised how quickly half a ton of cookies disappears. It took just about two weeks. Just when it was all used up, a pallet of Belgian waffles unfortunately fell off a forklift. This was again paid by the insurance, and the employees again merely helped with the clean up. After this half ton of Belgian waffles was cleaned up two weeks later, an pallet of German chocolate bars was damaged, and so on. You get the drift.

Theft of small items for personal use can be considered ignorance, and companies may go easy on the offenders – although it still is a criminal act. However, if someone steals in order to sell the items elsewhere, few companies would not start legal actions. Especially since these cases can reach quite some sums.

One example I have heard was from a plant making diesel engines for trucks. The plant expanded, and during the construction, dump trucks went in and out of the plant to haul away the excavated earth. Management received a tip and decided to check one of these trucks leaving the plant.

It turned out that below the earth there was a tarpaulin, and below the tarpaulin were five completed heavy vehicle diesel engines, each worth around $10,000. Hence, the thieves tried to get away with over $50,000 worth of goods. It was not entirely clear if this was the first time they did this. It was certainly the first time they go caught. Of course, for these sums both the thieves and the inside collaborators were prosecuted, and the involved employees fired.

If you cruise through eBay or other auction and secondhand sites, you will also find many industrial goods and items of dubious origin. One company noticed a large number of spare parts for their CNC machine tools being available online, while missing these parts in their warehouses.

While small thefts are often ignorant individuals, many of the larger thefts are committed by organized crime gangs, often with inside help.

Another form of theft I encountered was – strangely enough – the company stealing from itself. This takes a moment to understand. You may argue that it would be impossible to steal money from yourself, since, after all, you have the same money before and after the “theft.”

True. But in a larger organization, the goods would not be where you expected them to be.

In this particular case, manufacturing and development was in the same plant. Whenever development needed parts for prototypes, they just waited till the shop floor shift was over, went downstairs, and helped themselves to anything they needed to work on the prototype. Of course, the next day production would run out of parts, since according to the computer these parts were still available, but in practice they were missing. While there was not a loss of material within the company, there was a financial loss due to a production stop, delayed shipments, and overall extra effort to straighten things out.

What Is the Effect?

This brings me to the effect of theft for the company. For one thing, there is the expense to replace the lost material. However, often worse is the fact that the material is not there when you need it. Since thieves usually do not update the ERP system, your ERP system still claims to have the parts. Yet when you need them, you will find out that they are not there. Production will grind to a halt, both work time and machine capacity will be wasted, and logistics has to go into overdrive to either organize some parts or pull forward the production of the next goods (for which hopefully parts will be available). In any case, it is usually chaos, and chaos is usually costly.

Depending on how significant the problem of theft is in your plant, you may think about countermeasures. These could be along the lines of prevent, detect, and prosecute.

Prevent: Try to prevent thefts in the first place. Educate your employees about the problems of theft for the company, and the legal implications for the thief. Establish work standards that make theft more obvious and hence less likely to happen.

Detect: Try to detect theft. Some companies make sample searches of the bags of people leaving the plant. Others install video surveillance in critical locations. However, try not to overdo it. If your company becomes a police state, morale will suffer and the company will be worse off than with some smaller thefts.

Prosecute: If you find a thief, you should take action. Depending on the significance of the theft, this may range from a warning up to termination of employment and legal prosecution. Legally speaking, a thief may be fired even for small thefts. I have heard of cases where people were fired for the theft of a leftover hamburger from a buffet, the equivalent of $1.50. However, in these cases the company wanted to get rid of this particular employee anyway and was looking for an excuse to overcome the inconveniences of the local labor laws.

In sum, keep an eye out for vanishing material. If material is missing, it may be an honest mistake like a booking error or a misplacement. However, it could also be intentional theft. However, try not to treat everybody like a suspect. Yet if evidence is mounting up, do take action! Overall, I hope your plant is not much affected by theft. If it is, please let me know your juicy stories  through the comments.

In any case, I hope this article was interesting to you. Now go out and organize your industry! 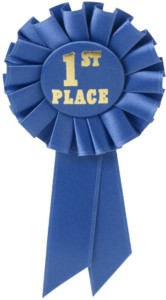 Quick side note: The people from BTOES Insights did a survey among their readers to find the best Operational Excellence Blog. Over 100 blogs were suggested, and guess who made it into the top ten? AllAboutLean.com! While it does not say so on their site, they told me by email that my “blog was most popular when we asked the community. […] your blog came in at #1!”

There you have it, you are reading the best blog on the web on operational excellence 🙂
based on a survey by one website with an unknown sample size of responses, limited number of blogs examined, terms and conditions may apply, take it with a grain of salt – but I am just thrilled about it! Keep on reading!

12 thoughts on “Loss of Material: Theft!”