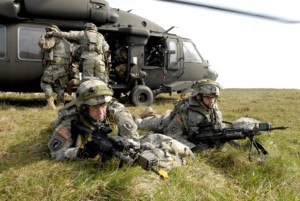 In a recent LinkedIn discussion, there was a disagreement on leadership favoring a much more authoritarian leadership style and stating “A general who asks his soldiers if they will fight, he is not yet ready for war.” I disagree with this view, both for military and especially for manufacturing. Yet, this discussion inspired me to write two posts on the difficult subject of leadership. This first post here looks in more detail at military leadership, and the occasional need of soldiers to refuse, ignore, or disobey an order. A second post will look at what this means for manufacturing.

Probably some of the strictest institutionalized decision making is found in the military. The officer in command gives an order, and the soldier executes the command without hesitation. In the military, this may often make sense. The common soldier usually does not have an overview of the overall strategy, and even if the soldier were allowed to know the master plan, there may be not enough time to discuss all the questions while the bullets are flying. Hence, usually it is a good approach that the soldier follows orders instead of questioning if the order is really good.

But, of course, this does not mean that the leader makes no mistakes. In fact, history is full of flawed military decisions, from small skirmishes to large-scale battles. The war in Iraq was started to find “weapons of mass destruction”… which were not there. British, Russians, and Americans invaded Afghanistan with some regularity, only to find that this was a costly mistake. The Vietnam War was maybe also not so hot, as far as decision making. And we Germans started the biggest war ever … twice! Bad decisions go all the way up to a country’s leadership.

Come to think of it, most wars are probably a mistake …

Soldiers Can Disagree, Too

The soldier is supposed to just follow orders, but in reality most soldiers have quite an opinion on their work, especially if it is THEIR life on the line, and not the ones of the old guys (and sometimes girls) back home making the decisions. If soldiers disagree, while not legally, in reality they do have ways to act. The easiest one is dragging their feet. They follow the orders, but not with much enthusiasm or speed.

They may even refuse orders altogether. When NORAD did a test to see if soldiers would launch a nuclear missile (without knowing that it is only a test), quite a few soldiers disobeyed and did not want to start World War III. This may have actually saved the world, when Stanislav Petrov in 1983, on duty at the Russian early warning command, decided not to forward the information of a nuclear attack of the USA on Russia, believing (correctly) that this was a computer glitch.

Refusal can also become aggressive, and during the end of the Vietnam War quite a few soldiers voiced their disagreement by throwing a hand grenade at their superiors, which is known as “fragging.” German soldiers, during the end of both World Wars, sometimes just shot their officers in the back. 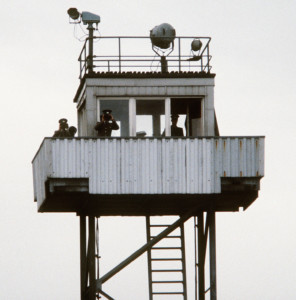 Or another example (again from Germany): While Germany was divided into East and West Germany (1949–1990), the East German border guards had strict orders to shoot to kill if a defector tried to flee East Germany to the much freer and democratic West Germany. (For PR reasons, this order was paused during public holidays.) This caused the death of at least 260 people. However, at least some guards turned out to be very lousy shots, missing the target even at short distances.

Even officers refused orders. In 1944, when World War II was pretty much lost, Hitler ordered his commander of Paris to defend the city under all circumstances, no matter the cost of civilian lives or property, and to destroy the city if defense was impossible. The commander refused and simply surrendered to the Allied Forces.

Or, to give you a more recent example, the UN peacekeeping mission in Bosnia in the 1990s. Following the break up of Yugoslavia, the conflict in the Balkan escalated, including ethnic cleansing, mass-rape, genocide, and other war crimes. To de-escalate the conflict, UN peacekeepers were sent.

Now, I am not a military expert, but to me it seems like politicians like to send UN peacekeepers, but with orders not to hurt anybody or even shoot, because that would make the politicians look bad. It seems they hope that just putting some blue helmets nearby will impress the other factions… which it usually does not. Politicians also like to micromanage their troops. Many other forces were helpless, and the soldiers tasked with protecting Srebrenica were barely able to protect themselves during the Srebrenica massacre. They did follow their orders to the letter, though.

Not so Ulf Henricsson, the Swedish commander of a Swedish-Danish-Norwegian battalion. Swedish soldiers are taught that the overall goal is more important than rules and orders. Hence, Ericsson ignored orders from the start. For example, he decided not to take only lightly armored vehicles and small arms, but brought Leopard battle tanks. When his forces took hostile fire, they simply shot back, regardless of the rules of engagement. When he was ordered to stand down, he pretended the radio did not work. The goal of his mission was to protect the civilian population, and he did what ever was necessary to protect them. While he was called trigger-happy at home, the opposing forces quickly learned not to mess with him, and the local civilians were much better off for it. (For a good write up see Trigger-Happy, Autonomous, and Disobedient: Nordbat 2 and Mission Command in Bosnia)

In fact, most modern militaries have laws that a soldier must refuse an unlawful order, and soldiers following orders have been prosecuted for this (e.g., for the Mỹ Lai massacre). German military law, for example, says that a soldier must refuse an order if the order is unlawful or if it violates human rights and dignity (yes, we don’t want to be responsible for World War III).

Sometimes Soldiers Are Intentionally Out of the Loop 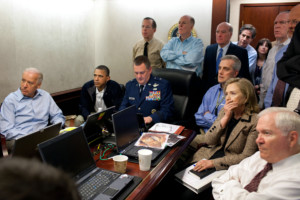 Military also has (often but not always) realized that micromanaging a soldier on the ground is not good. It delays decisions, decisions are made by someone faraway from the facts (the Gemba if you so will), and it creates a culture of distrust and leads to inferior results (which, for the military, often means death). When Seal Team Six killed Osama Bin Laden, President Obama and his team were watching the live video stream. Technically, it would have been easy for the leadership to also give orders to the soldiers in real time, but this was not done intentionally and the soldiers on the ground were making their own decisions to achieve the mission goal.

I am not a military expert (despite lots of experience playing Metal Gear Solid). But overall, the idea that a leader knows all the answers is a fallacy. Even the idea that the leader knows best is usually not true. Of course, the same is true for the followers. If time allows it, the combination of different views usually gives best results. Hence, even for the military, disagreement, independent thinking, and sometimes even disobedience is often good for the overall results (although the military is still unsure about how much disobedience it wants). In my next post I want to apply this learning from military leadership to the shop floor. Now, go out, enable your people to make their own decisions, and organize your industry!

8 thoughts on “Military Leadership and Disobedience”