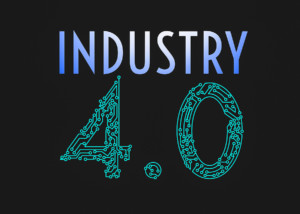 Pretty much ten years ago, in April 2011, Industry 4.0 was first presented to the audience at the Hannover Messe in Germany. Industry 4.0 made lots of promises about everything getting better and easier. But, <surprise Pikachu>, it did not. Let’s have a look.

Industry 4.0 is (supposedly) the fourth industrial revolution after the first (mechanization and steam power), the second (electricity and mass production), and the third (computer). Networking everything will (supposedly) solve a lot of problems. If you are a regular reader, you know that I am somewhat skeptical of a lot of these claims. See also my posts A Critical Look at Industry 4.0 and Industry 4.0 – What Works, What Doesn’t.

A Look at Productivity

In this post (inspired by a German article, source below) I am looking at the impact of Industry 4.0 on manufacturing. Usually, improvement in manufacturing is measured as labor productivity (i.e., how much goods a worker can produce in a given time). For countries this is usually measured as a monetary value per worker or per worker-hour. Luckily, these statistics are readily available.

The graph below shows the annual percentage change in manufacturing labor productivity in Germany (available data 1970–2020 Source) and the USA (available data 1987–2019 Source), including the ten-year moving averages (dotted lines). I also indicated the period when Industry 4.0 became a buzzword, which is from 2011 onward (albeit the topic is – frankly – not new).

If you are a strong believer in Industry 4.0, you may have expected a stronger growth due to the… well… revolution going on. In fact, the opposite is happening. Manufacturing productivity growth during the last ten years was definitely lower than in the decades before, and sometimes even negative. It almost looks like “the revolution” is slowing productivity.

Going a bit further back to the 1950s, the graph below shows you the overall labor productivity (not only manufacturing) for both Germany and the USA, again including the ten-year moving average as a dotted line and showing the period of Industry 4.0 (source). 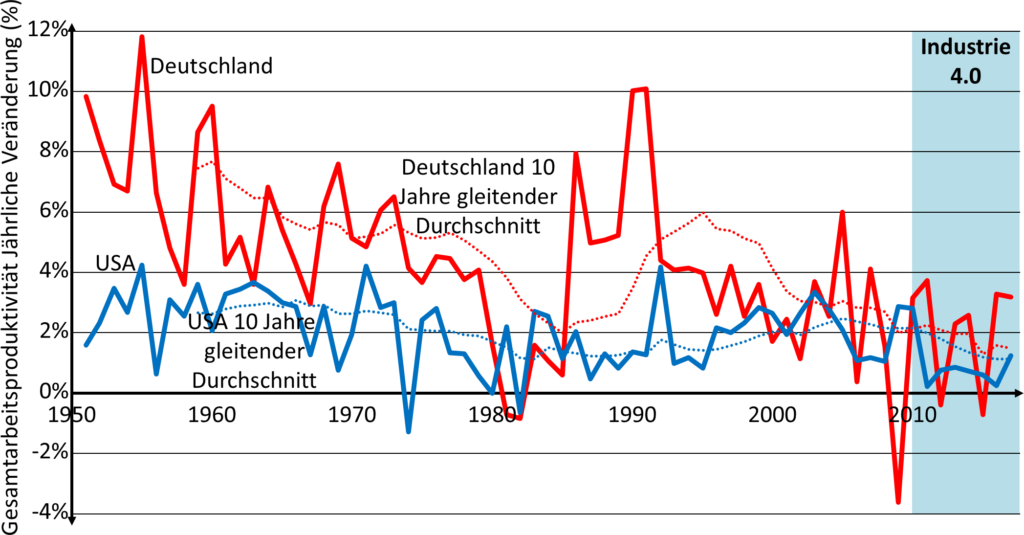 Since this graph merges all productivity (besides manufacturing, also agricultural, services, mining, etc.), the effect is no longer as pronounced, but still there. Productivity growth in Germany is the lowest since World War II, and US productivity is not so hot either. But most decidedly there is not any uptick visible. What happened to the promised improvement from our new revolution? To be fair, there are lots of other factors that can affect productivity, from orange presidents to viral pandemics. But overall, the impact of Industry 4.0 on manufacturing is still disappointing.

Why Is There No Revolution?

Clearly, there is no revolution. If anything, productivity growth is less than before. In my previous posts I wrote a lot on caution when dealing with the Industry 4.0 hype. Some things work, but a lot of things don’t. And you need to do thorough PDCA to make sure it does work. As well, it is much easier to sell the hype together with software, services, or consulting, than it is to actually provide bottom-line results.

I believe Industry 4.0 is profitable for software vendors, service providers, and consultants, but only sometimes for the actual manufacturer. It is like a gold rush, were your best bet on making money is to sell shovels, and a possible way to lose money is to dig for gold. Some people DO get rich, but most don’t.

It is the same in manufacturing. Some companies benefit immensely from Industry 4.0, but I believe the majority of companies are better off being followers than leaders. It also depends on how you interpret Industry 4.0 (You’re using email? Hey, you are a digitally networked cyber-physical Industry 4.0 company! … or maybe not)

One of my colleagues, Steffen Kinkel, believes that companies put effort into digital systems but neglect to solve the fundamental problems on the shop floor. Putting a digital twin on an inefficient process does not magically make the process efficient. Data can help in making it efficient, but you still need to put in the effort to improve the underlying process. Unfortunately, many companies skip on this actual improvement part in favor of more digitization and more data … which they then don’t use either. 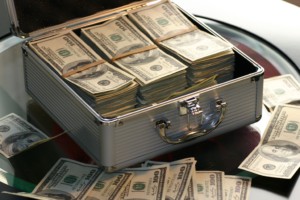 But there is still a lot of improvement potential. One German study, Wertschöpfungspotenziale 4.0 (source below), finds still 95 billion Euro potential for improvement in the German industry by using lean manufacturing, or roughly 14%. Personally I think there will be more, but that is just a hunch. Unfortunately, investment in improvements and new equipment is reduced in favor of research and also digital toys… sorry… tools. But while painting a car makes it look nicer, it does not fix the broken engine. 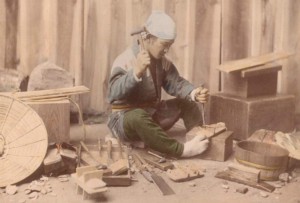 Investing in research, of course, is valuable. But you also need to actually make the product. This is, I think, part of the German mentality. We love to engineer, design, and make blueprints. But the building of the product is more of a hassle that has to be done. (It is different in Japan, where the art of making things is part of the Japanese culture). It should be obvious that for a company to be successful, you need a combination of different factors. You need research, design, sales, AND manufacturing. The weakest link will limit your success. With all the glitzy digital companies from Google to Facebook, manufacturing does look old-fashioned and boring to some. But this is wrong. Both the Roman and the Chinese Empire fell far short of their potentials because manufacturing was left to the slaves and those not smart enough for politics or military (trust me, I wrote the book on this).

In sum, Industry 4.0 is NOT a shortcut to solve problems, but at best an aid. It does not magically solve problems and make you better. You still need to take care of all the little things on the shop floor. Overall, we continue to need manufacturing, and to invest and improve manufacturing, to be successful. Now, go out, fix some problems on the shop floor, and organize your industry!

This blog post was inspired by an article from the German magazine Heise “Zehn Jahre Industrie 4.0: Null Produktivitätsfortschritt“, written by Alexander Horn, which was pointed out to me by Dr. Tom Drews. Many thanks, Tom! This article is based on the (also German) report “Wertschöpfungspotenziale 4.0” by Steffen Kinkel, Sebastian Beiner, Arndt Schäfer, Heidi Heimberger, and Angela Jäger.