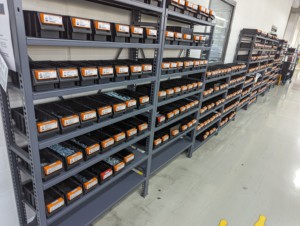 Screws, or more generally fasteners, are a main staple in most industries. Recently I visited a factory and saw a nice way to automate the procurement of screws and other fasteners. This Industry 4.0 solution is part of a vendor-managed inventory (VMI), where you not only buy the screw, but also the service of always having enough screws, and let the vendor manage the hassle of making sure there are enough screws. I found the example in this factory quite neat, and hence decided to tell you about it. Let me show you. 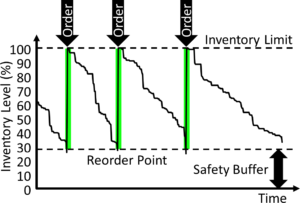 The example I will show you is weightLOG®2 from the Swiss SFS group, which, among other things, makes fasteners. The theoretical basis of this vendor-managed inventory is very simple: it is a reorder point. You have your target inventory. Whenever your inventory falls below the reorder point, you order enough products to fill up the inventory again to the target level. This is a simple approach commonly found in industry. It is also a pull system. You can find more about it in my book All About Pull Production.

In theory, it is easy. In reality, however, you face the challenge of knowing how many products you have currently. You could simply use your ERP data… but we all know how accurate that is. It usually works better for larger and more expensive products, as it is easier to count engine blocks than it is to count screws. Hence, your ERP data is probably off, which could lead to excess inventory (not so good, but then, it is only screws) or a lack of inventory (which is bad, because a missing cheap screw will stop your assembly line).

It would be much more accurate to actually check the physical inventory instead of trusting the digital twin. But then, this is extra work for someone checking how much stuff you have. Again, this is easier for large and more expensive components than it is for screws. Some companies automate this using RFID or similar technologies, but again both the expense and the need to physically attach the RFID chip to the product makes it unsuitable for screws.

You can see the diagram of the box below, as well as photos from different angles. The measurement comes from a integrated scale underneath each box. This scale through a cable channel is measured by some electronics in a box. This box also contains the battery and a BLE 4.0 (Bluetooth Low Energy) sender, which connects to a gateway or controller and from there to the mobile phone GSM network. In front of the box is a small label. A plastic protrusion protects the label from bumping into something and accidentally initiating an order.

The label has, of course, all the information on the parts in the box (in the image below, a M3x8 screw). It also tells you the target inventory (here 275) and the reorder point (here 150). But besides the printed info, it also is interactive. If nothing is happening, then all should be fine. If the WLAN symbol is blinking, then an order has been issued. If the truck is blinking, then an order is already dispatched and on its way to the customer (i.e., you!). Behind the WLAN symbol is a button that can, for other models (the pushLOG), be pressed if you want to order manually, but this is inactive here.

The normal order cycle is simple. The box measures its weight at regular intervals. If the weight indicates that the content is below the reorder point, an order is issued to get the weight (i.e., the quantity) back to the target. This happens if the weight is below the limit for three measurement cycles. Hence, lifting the box up (and giving the scale a signal of zero) won’t automatically order more parts. In regular intervals, the orders are put together and a pallet of screws of all types is sent to the customer. If the weight approaches a critical lower limit, they even have a rush order mode.

An employee of the vendor shows up and distributes the pallet contents to the different boxes. The new parts are added on top of the old parts, which is not really FIFO, but seems to be okay for screws. (They also offer a TurnLOG, where the box has two compartments to have a better FIFO sequence, similar to the two-box system).

In the factory I visited, they had a weekly delivery (collect orders until Thursday afternoon, pallet arrives Monday afternoon, boxes refilled on Tuesday), which suited them well for the quantity they needed. Larger factories may, of course, have more frequent orders. The factory had one central shelf for the vendor-managed inventory, but here, too, you may have multiple shelves in different locations all over your factory, as long as you allow the vendor access to your site. 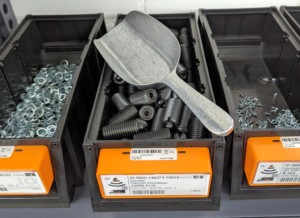 Of course, no system is perfect. For example, the scale has difficulties measuring weights below 100g. However, having an extra 100g of screws hopefully won’t break your budget. Or, the batteries were promised to last forever, which happened sooner than they expected. Luckily, the battery idle voltage and under-load voltage is also transmitted wireless to the vendor (along with the weight, the time of the last connection, the RSSI signal strength, the firmware version, and the box type). Another problem was that an employee with a stronger grip and larger hands accidentally but frequently pressed the button when handling the boxes, hence accidentally ordering more screws. 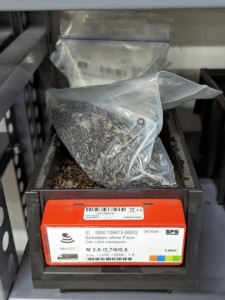 During my visit I also saw a few boxes that looked quite empty – which was somewhat okay since the workers also had a inventory of screws at their workspace. I also saw one box (shown here) that seemed to be overly full, with bags of still-packaged washers on  top of the box.

Another problem was that initially employees left the screw shovel on top of a box… which of course changed the weight of the box. Yet another problem was that initially the shelf (also managed by the vendor) had a small protrusion to keep boxes from slipping out. However, if the box was paced too far forward, it stood on this protrusion, and lifted the scale off the shelf. This resulted in a wrong weight measurement and unnecessary orders as illustrated below. They redesigned the shelf since then.

Despite all of these kinks, the plant quite liked this approach to the vendor-managed inventory of screws and other fasteners. Naturally, this is not free, but makes each screw somewhere 8–12% more expensive. However, now you no longer have the hassle of keeping track of your screws. They also haven’t really had issues with missing screws, which is the whole point of this exercise. The system also requires trust in your vendor to deliver good quality and to bill correctly only for the consumed screws. SFS also offers third-party products in the same system, but this company was somewhat hesitant about that.

SFS  WeightLOG is a pretty neat system. STS also offers TurnLOG, where you order simply by turning a divided box around, pushLOG where you push a button, and more. This ensures a better FIFO sequence. But there are also many other options. You can also go non-digital with a classical two-bin kanban, but then you have to send the empty boxes (or at least the signal) back to the vendor. But there are many more digital solution. For example, Bossard also offers a similar Smart Bin. Just by googling I also came across Stockvue and their smart scales, eTurns and their SensorBins, MettlerToledo and their SmartShelf, KVT and their smart bin, and many more. I have seen myself in detail only the SFS, but overall I thought this is a quite neat Industry 4.0 solution. Now, go out, let your trusted vendor take care of your parts inventory, and organize your industry!

P.S.: Many thanks to Claudia Wagner and her team at Uster Technologies for showing me around in their plant, and for Torbjørn Netland for hosting me at the POM of the ETH during my sabbatical and making the contact to Uster.

8 thoughts on “The Modern Way to Buy Screws”