This post describes a second accurate way to detect the bottleneck in manufacturing systems, based on the precise times a process is waiting or active. The method is highly accurate, not only giving the likelihoods of different processes being the (temporary) bottleneck, but also estimating the improvement of the entire system capacity if the bottleneck(s) are improved. It is also possible to observe the shifting of these bottlenecks over time. The method was developed by me during my time at the Toyota Central R&D Laboratories in Japan. See below for a complete list of posts on this series on bottlenecks.

As discussed in the previous post, the longer a process is active without interruption by a waiting time, the more likely it is the bottleneck. A process frequently interrupted by waiting for material or for transport (starved or blocked) is unlikely to be the bottleneck. In the previous post, we measured the average time (active period) a process is not interrupted by waiting times. Active in this sense means not waiting (i.e., any uninterrupted sequence of working, repair, breakdown, changeover, etc.).

Assume you have a system with four processes. For these four processes you measure the times the process is active (working, breakdown, under repair, regular maintenance, changeover, etc.), and inactive (waiting for material, waiting for transport). If you now plot these measurements over time, it may look like the figure below. The black horizontal lines represent active periods, with inactive periods between the short vertical lines.

You will see that in all likelihood the length of the lines is not distributed evenly. The two basic fundamentals of the active period method are:

Applying these requirements will give a bottleneck behavior as shown below: 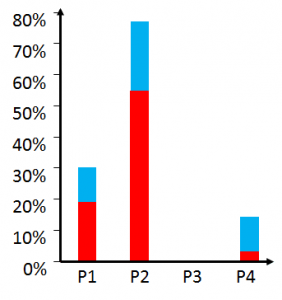 However, P1 was also the sole bottleneck almost 20% of the time, with another 10% as the shifting bottleneck. While much less than P2, it is not quite insignificant. If there are easy ways to improve P1, it may be good for the system too. P4 was almost never the bottleneck, and P3 was definitely never the bottleneck, having no influence on the overall system capacity. Hence the method gives you a precise likelihood of each process being the bottleneck.

While this prediction is probably not needed for practical applications, it does prove the accuracy of the bottleneck detection method.

Requirements of This Method

The method works well for all kinds of systems, including job shops, parallel systems, etc. It has been tested successfully for complex real-world systems with dozens of processes. As long as the system is connected (i.e., not two separate independent systems), the method works.

On the downside, it has a very high data requirement. You need to know exactly when each process is active or not. In many cases, this data is difficult to obtain. It does work very well for simulations where you have all the data you need available, and it does work for highly automated systems where the data is collected via computers.

If the data is not available or the system is less automated, then I highly recommend The Bottleneck Walk – Practical Bottleneck Detection Part 1, presented in my next post.  This is by far my preferred method in practice!

Other Posts in this Series on Bottlenecks