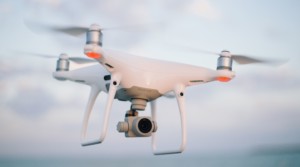 A discussion of fancy new technology would be incomplete without mentioning drones. A simple Google search for “drone and manufacturing” returns around 72 million results. There is definitely a lot of buzz on drones and manufacturing. However, you probably have not yet seen a drone in manufacturing. This is because there are indeed very few cases of drones in manufacturing, and most of them are trial runs that never make it into regular production. Let’s have a look at what this is all about!

Drones in general are unmanned aerial vehicles. Nobody is on board, and the pilot is controlling the craft from the ground – if there even is a pilot, as an AI may assist or even control the aircraft. There are fixed-wing aircraft (i.e., planes) and rotary-wing drones (i.e. helicopters, although often with multiple rotors).

Drones have been used for all kinds of purposes. They are used for gathering data as for example forest fire monitoring, aerial photography and videography, agricultural monitoring, archaeology, infrastructure monitoring, and science. The drone Ingenuity has even flown on Mars.

Besides gathering data, they can also deliver payloads, as for example smaller parcels to more remote locations, smuggling of drugs or other contraband, or dropping bombs on Russian soldiers invading Ukraine. There are also drones with flame throwers to burn stuff off power lines.

This blog post, however, focuses on the use of drones within a factory – although there is not much of this yet. Factory use rules out pretty much all fixed-wing drones, as they need more space to start and land (i.e., a landing strip), whereas helicopter drones can take off and land on the spot. At least I do not know of any fixed-wing drone use within a factory.

Problem of Flying in a Factory

The main problem of flying drones in a factory is drones malfunctioning and crashing. Like every technical device, drones sometimes fail and fall to the ground. This may damage the drone. If it falls on a machine, it may also damage the tool, the machine, and/or the product. The biggest worry is if it falls on a worker. The weight of the drone alone, or with payload, may cause injury, and that is even before dozens of rotating helicopter blades (yes, they are called blades!) injure a person. While small drones may not be strong or heavy enough to cut skin, you definitely don’t want their blades hitting your eye.

There are multiple ways around this problem. First, there is the option for the workers to wear personal protection (i.e., safety glasses and hard hats). But this is in all likelihood very unpopular with the workers. It may be okay if they have to do it anyway (e.g., on construction sites), but otherwise it definitely is not a morale booster.

Another option is to create a safety cage for the drone. One maker I know is Flyability. They make a soccer ball–shaped safety cage around the drone. This protects the workers and the machines from the drone, but also protects the drones from the workers, machines, or generally anything it could bump into. Now you can use a drone again even if there are people in the factory. On the downside, it is pretty difficult to attach or remove items for transport. Only very lightweight items could be attached outside of the cage, and anything heavier would need to be inside of the cage. I don’t really see how this can be used for transport.

Such caged drones, however, can be used for data gathering. A permanently attached camera within the safety cage is quite easy and safe to do. This seems to be the main use of such drones. The downside here is that you always have a cage in front of your camera, and anything you observe you see through this mesh. But this is doable, at least for humans. It may be an additional twist if you use AI image recognition. The latest model by Flyability, however, keeps a gap in the cage where the camera is, giving an unobstructed view.

The last option for avoiding drones dropping on people in a factory is to simply remove the people. If there is nobody there (except maybe the drone operator), nobody can get hurt. Fly the drones at night or on weekends. I know of at least one example that is doing this (more on this later). 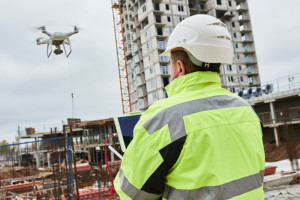 Another problem is the cost of running the drone. This is pretty much a question if you need a pilot, or if the drone runs autonomously. If you have a drone pilot, then you add labor cost to the drone when you use it. That makes it quite a bit more expensive. For example, if you use piloted drones for transport, you may just as well have the pilots carry the goods around, and save money by not having drones. If you inspect something hard to reach, you may just as well have the pilot bring a ladder instead. I believe for drones to be more than just a fancy (and temporary) showcase, it would have to be autonomous.

Drones may make sense for transporting items over longer distances, where the source and/or the destination is not fixed. Besides the obvious military use of dropping bombs and launching rockets, drones can be used to deliver items like food, medicine, mail, and other items to remote locations or locations that are hard to reach (e.g., the middle of the enemy headquarters in a war).

This usually does not apply to manufacturing. Locations within your factory are usually neither remote nor hard to reach, with possible exceptions of inspecting your chimney or similar. On the contrary, especially for mass production you have a large volume of material flowing into and out of the production. Besides the problem of drones dropping onto your workers, you would need a whole fleet of drones to ensure a steady supply.

A car factory produces roughly a car a minute. If you deliver the steering wheel, for example, you need a steering wheel per minute. If the drone takes fifteen minutes for loading, transport, unloading, and return trip, you need at least fifteen drones in the air (or un/loaded) at all times. And this is only for one part. These drones should also not collide with each other. And don’t even think about having fifteen pilots (or more if you have multiple shifts) to control the drones. In all likelihood, it will be much cheaper to put the steering wheels in a box and use a forklift to bring them over. 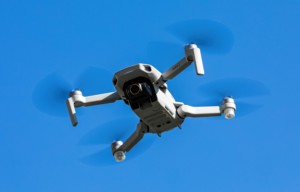 In my view, pretty much the only use case I see for drones in manufacturing is to gather information. This could be reading of barcodes (see my next post), inspection of hard-to-reach areas, RFID scanning, thermal imaging, and more. The oil and gas industry is at least testing the use of drones to inspect hard-to-reach areas. But even here it is not always easy to use drones for more than just a flashy PR showcase. For a proper use of drones, the benefit should outweigh its cost. However, this is rare. Very rare indeed. Most often, the only buzz you hear is not from the drones but from marketing. While there are plenty of flashy videos, trials, and tests for drones in manufacturing, I know (so far) of only one case at IKEA where the use of drones seems to be worth its cost. But more on the IKEA use case for drones in my next post. Now, go out, don’t fly away with your drone yet, and organize your industry!

During my sabbatical at the ETH in Zürich in the summer of 2022 with Torbjørn Netland, I had the pleasure of working with his postdoc and drone-in-manufacturing expert Omid Maghazei, who taught me a lot on drones. Many thanks, Torbjørn and Omid! See also their paper below, which is also the primary source for my next blog post on IKEA.

3 thoughts on “Drones in Manufacturing”