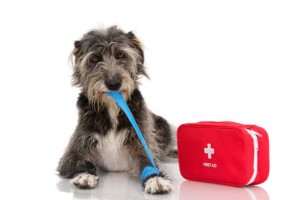 Kanban (and pull systems in general) are a beautiful way to manage production. While the number of kanban cards should be verified periodically, for certain situations, however, it may be sensible to have additional kanban prepared. These extra kanban are added to the system on short notice to alleviate symptoms of other problems. However, please do not see this as a new and cool additional feature to your kanban system. Instead, if you have to use extra kanban, then something is going  wrong. Such extra kanban are only an emergency fix and do not solve the underlying problem. Still, in some cases you do need an emergency fix. Let me explain:

Often, kanban (or CONWIP) loops are in sequence to establish pull across the entire value stream. The image below is a simple example with three subsequent kanban loops. The supermarket acts as a buffer against fluctuations between the three processes.

However, sometimes you have rarer and larger fluctuations. These could be unexpected. For example, a machine suddenly breaks down and it will take days to get the spare parts. These could also be expected, in which case they can be planned for. For example, you know your ski boots sell a lot in fall but very little in spring (seasonality). Or you have a planned annual maintenance that shuts down a machine for a week. In any case, you have rare and large fluctuations. It would make no sense to set up the pull system to cover these few and far-between but extraordinary fluctuations, just to have tons of material sitting around for the rest of the time.

This brings me to my quick fix: Extra kanban! You keep a stack of extra kanban to insert into the system temporarily, and then remove these cards again once the fluctuation has passed. You do build up inventory, but only temporarily for the duration of the extraordinary event, and remove kanban again after the disruption has passed.

When It Is Useful…

Overall, extra kanban can only help if the build-up of an extra capacity buffer (i.e. the extra kanban) are helpful. Let me give you a few examples. The example below shows three pull loops in sequence. The process in the last loop has a breakdown that will take longer to fix. The bottleneck is somewhere before this disrupted process. In this case it is viable to temporarily increase the number of kanban in the pull loop before the disruption. The bottleneck can keep on working and build up inventory. After the disruption ends, the subsequent processes can catch up with the previous processes and reduce the inventory again. This reduces the overall loss of capacity due to the disruption.

It is also possible that a disruption does not decrease capacity but increases capacity or demand. The most common example is seasonality, where the customer temporarily orders more parts that the pull system is set up for. Usually this is resolved through a seasonal adjustment of the pull systems and the provided production capacity. It is also possible to build up an inventory beforehand using extra kanban if the capacity is not enough to satisfy peak demand. Here, too, we would need to know this beforehand to prepare.

Overall you have to think it through for your system to see if additional kanban can help or not. In the worst case, you create additional inventory without any benefit for the entire production system.

How to Do It

It helps to have these extra kanban clearly marked as temporary. Besides some additional label, they could also be of a different color for easier identification.

Another question is which products to prepare. If the disruption is after the bottleneck, it is sensible to build up inventory (i.e., add extra kanban) for high-runner products. In this case you are more confident that you actually need the material. Low runners can then be prioritized using the available capacity. If the disruption is before the bottleneck, however, you may have to add extra kanban for all items produced.

You should also think about how many extra kanban you should add. It could be enough to cover the disruption, but you may be constrained by the available storage space. Often it can make sense to cover only part of the disruption to avoid excess storage and handling fees.

The additional kanban cards are added in the list of kanban cards that have to be produced. Ideally they are not a big block of the same part type, but mixed in suitable lot sizes. When you want to remove cards, you take away only cards that are not attached to an item. If such a card is attached to an item in the supermarket, then you have to wait until the item is taken out of the supermarket. For low runners you may also swap an extra kanban card with a normal one taken out of the production queue before production.

Why It Is Only a Quick Fix

Please note that this is not a fancy new method for pull, but a quick fix of the symptoms of another problem. Much better would be, of course, to prevent the disruption in the first place. Better than having extra kanbans is to have no larger breakdowns, or to improve and shorten maintenance time. Hence, using extra kanban is usually a sign of problems rather than excellence. Now, go out, reduce fluctuations so you don’t need extra kanban cards, and organize your industry!

P.S.: This post was inspired by a discussion with Karl-Ludwig Blocher.

2 thoughts on “When and How to Use Extra Kanban”