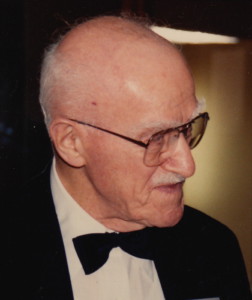 On Christmas Eve 115 years ago, Joseph Moses Juran (December 24, 1904 – February 28, 2008) was born. He was a highly respected and very influential quality guru. His work not only helped the United States, but also changed Japan, possibly even more than that of his better-known colleague Edwards Deming. Time to look back on his life’s impact on the world.

Joseph Juran was born in the city of Brăila, Romania, in 1904 as one of six children of to Jakob and Gitel Juran. When he was three, his family moved to Gura Humora. In 1912 the family immigrated to Minneapolis, Minnesota, hence he and the rest of his Jewish family escaped the horror of the Holocaust.

What follows is a muster story of a successful immigrant starting out in poverty but becoming one of the most respected authorities in his field. The family lived in a shack, and Joseph pitched in by selling newspapers … where he was also cheated by one of his customers. Later on, he worked numerous jobs, including as a grocer assistant, a (highly under-qualified) bookkeeper, a wrapper of packages, a janitor, a printer, an editor, a shoe salesman, and more.

As a student he was an avid reader and also very good at mathematics. The 1920, the same year his mother died, he graduated high school. He then obtained a bachelor’s degree in engineering from the University of Minnesota in 1924.

In 1924, Joseph left his dad’s home and started working at the Western Electric (later AT&T) Hawthorne Works, where he was assigned the inspection branch (nowadays known as quality control). Later he became a “troubleshooter” who investigated complaints.

Juran climbed up the hierarchy, eventually becoming head of the works inspection control division. However, in retrospect he considered himself a pretty bad manager. He also learned more and more about quality. By today’s standards, Hawthorne’s quality was not impressive, but by the standards of 1920, it was a leader in the field of quality. Juran was involved (but not instrumental) in the development of statistical quality control, nowadays often known by its abbreviation, SPC. He did, however, develop the training courses and trained many employees on SPC, including top management. As a side note, Juran also used his statistical skills to win quite a bit of money at roulette.

A later colleague, W. Edwards Deming, also started at Hawthorne in 1924, but they did not meet there. Well-known Walter Andrew Shewhart had joined the company only slightly earlier in 1918, and developed statistical control charts as well as gave the inspiration for Plan Do Check Act (PDCA). Shewhart influenced both Juran and Deming.

The Hawthorne plant is also famous for the Hawthorne experiments, (purportedly) showing that merely observing workers improves quality and productivity, although the data is based only on five female workers, two of whom were exchanged during the study. Subsequent research sheds doubt on these results. Neither Juran nor Deming were involved in these experiments.

While at Hawthorne, Juran married the love of his life, Sadie Shapiro, in 1927. Soon he had children: Robert Arnold (1928), Sylvia Louise (1930), and Charles Edward (1931). The family survived the Depression of 1930 well. While his salary was cut from $380 to $285, it was still a good salary, especially with prices going down similarly. Nevertheless, as back-up insurance, Juran enrolled in law school in 1931, then graduated in 1935 and was admitted to the Illinois bar in 1936 (although he never practiced). In 1937, still with AT&T, he moved to New York, although his career stalled (by his own account in retrospect, due to his own stupidity for starting a fight with his boss for no reason whatsoever).

However, in New York he got in contact with many industrial societies like the American Society of Mechanical Engineering (ASME), the Society for the Advancement of Management (SAM), and the American Management Association (AMA), and the National Industrial Confidence Board (NCIB). He soon enjoyed writing papers for the journals of these societies.

During World War II he was requested, in 1941, by one of his former employees to join the statistics division. Juran worked in the Lend-Lease Administration and Foreign Economic Administration. Toward the end of the war, Juran decided to go freelance, leaving AT&T in 1945 and becoming an independent consultant, initially as part of a consultancy but later on as a quite-successful freelance consultant. He consulted for various companies and industries, including Gillette razors, watch makers, carpet companies, automotive components, latex, optical instruments, food, Otis elevators, Xerox copiers, the US Navy, and many more. In 1951 he published his first edition of the now famous Quality Control Handbook.

After the war, he taught for a few years at New York University as an adjunct professor. He also became a good friend of another giant in consulting, Peter Drucker (1909 – 2005, a well-known management consultant).

In 1953 Juran followed an invitation to Japan to lecture about quality. This was the start of frequent trips to Japan. He visited numerous companies and also gave many well-received lectures on quality control. He was supported by the Japanese Union of Scientists and Engineers (JUSE), especially its managing director, Ken-Ichi Koyanagi. He expanded his lectures from focusing on quality to teaching about management in general. In Japan he is revered for his teaching, and many Japanese believe that the teaching from Juran was more helpful and better to apply than the teaching of Deming.

Overall, Juran visited Japan at least ten times, all but one following an invitation from Japan. His last visit was in 1990. Afterward, at age 86, his family told him to no longer travel internationally due to his age.

During Juran’s time in Japan, another even-better-known person was also working frequently in Japan: W. Edwards Deming. Their biographies have many similarities: they worked at Hawthorne, were influenced by Shewhart, and worked on quality, although Deming looked more at the mathematical side.

However, they never saw each other at Hawthorne and first met during the 1940s in Washington when Juran was the chair of a meeting that Deming attended. Initially they liked each other.

Both were invited to Japan to teach quality. However, Deming was little known outside Japan until a 1980 TV documentary If Japan Can, Why Can’t We? turned him into an instant celebrity in the US too.

However, it seems that they frequently disagreed on topics and over time grew apart. Deming believed all quality issues can be solved with statistics, whereas Juran believed that you need more than statistics to improve quality. Juran was shocked when Deming talked badly about the US’s Malcolm Baldrige National Quality Award simply because it was not named after Deming like the Deming Prize in Japan. Juran eventually believed that Deming vastly overestimated his contribution to Japanese quality, thinking that he (Deming) was the only reason Japan succeeded in quality. Juran, on the other hand, thought that he had a larger influence on quality in Japan.

Juran himself started the Juran Institute in 1979, which still teaches quality. He semi-retired at the respectable age of 90. Nevertheless, he wrote his (highly readable and recommended by me) autobiography Architect of Quality at the age of 92. He died on February 28, 2008, at age 103 due to a stroke.

Juran is considered one of the great minds in quality control. Some called him “the man who taught quality to the Japanese.” He is often mentioned in Japan along with Deming. Many of his books were translated into Japanese by JUSE, as were his lectures and papers.

Juran did not invent the Pareto principle – that was the Italian Vilfredo Pareto (1848 – 1923) – but Juran rediscovered it and applied to to quality. He moved quality away from mere statistics, but included the human aspect in quality, promoting the training of managers in quality aspects. In his view, bad quality did not originate with the workers but was a flaw in management.

His approach to improve quality is known as the Juran Trilogy, consisting of quality planning (product or process design that enables quality); quality control (measuring and controlling quality aspects; SPC would be found here); and quality improvement (take actions to improve quality).

Overall, Juran had a profound impact on quality, and his methods and teachings are still crucial for modern-day quality. Now, go out, improve your quality, and organize your industry!

7 thoughts on “115 Years after the Birth of Joseph Juran”