Historically, every nation starts out as an agricultural society. Up to before the industrial revolution, the economy of all nations was based on agriculture. Great Britain was the first nation to industrialize, followed shortly by Europe and North America. Nowadays, however, advanced economies are based mostly on service.

The graph below shows on the Y-axis the ratio of the output of the secondary sector (industry, mining, utilities) to the total value add, i.e. what part of the economy is based on the secondary sector. The X-axis shows the total value add per person, inflation adjusted into 2005 US Dollar. Each dot represents one of 131 countries for each year between 1970 and 2012, for a total of 5302 data points (For Details see Data Source below). The thick black line is the moving 255 value average. 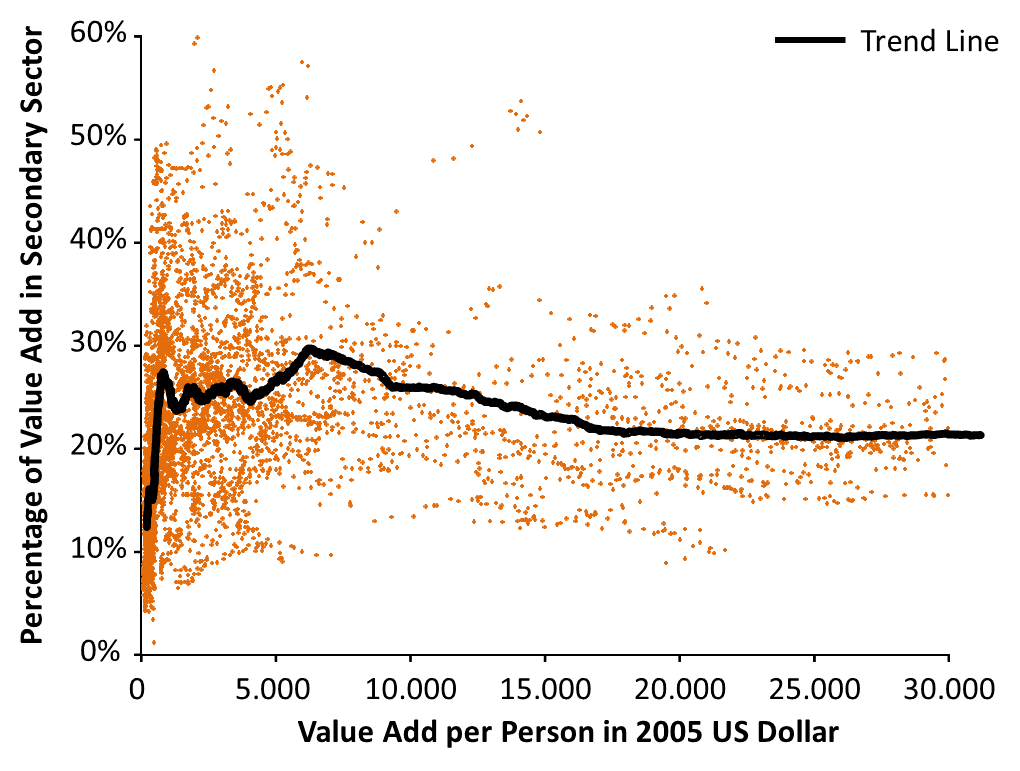 At first glance, it seems to be a mess of data. However, if you look more closely, you can see a trend. Poor nations with a value add of less than  $500 per person have very little industry, often as little as 5% of the total economy. However, industry increases steeply as the wealth of the nation improves. An average country with a value add of only $1000 per person has almost 30% of its economy in manufacturing. From then onward manufacturing holds steady until its peak of 30% for countries with a value add of around $7000 per person. After that the share of industry shrinks as countries become wealthier, leveling out at around 22% of the total value add.

There are very few nations with a value add per person of around $7000 that have less than 20% industry. It seems that on the way from agriculture to service, manufacturing is a necessary prerequisite to wealth. While the importance of manufacturing declines for wealthy first world service based nations, the path to the first world is through industry.

Below is the same graph, showing also the trend lines for the primary and tertiary sector. Clearly agriculture takes a nose dive while service increases. The steepest increase in relation to the starting point, however, is in industry. 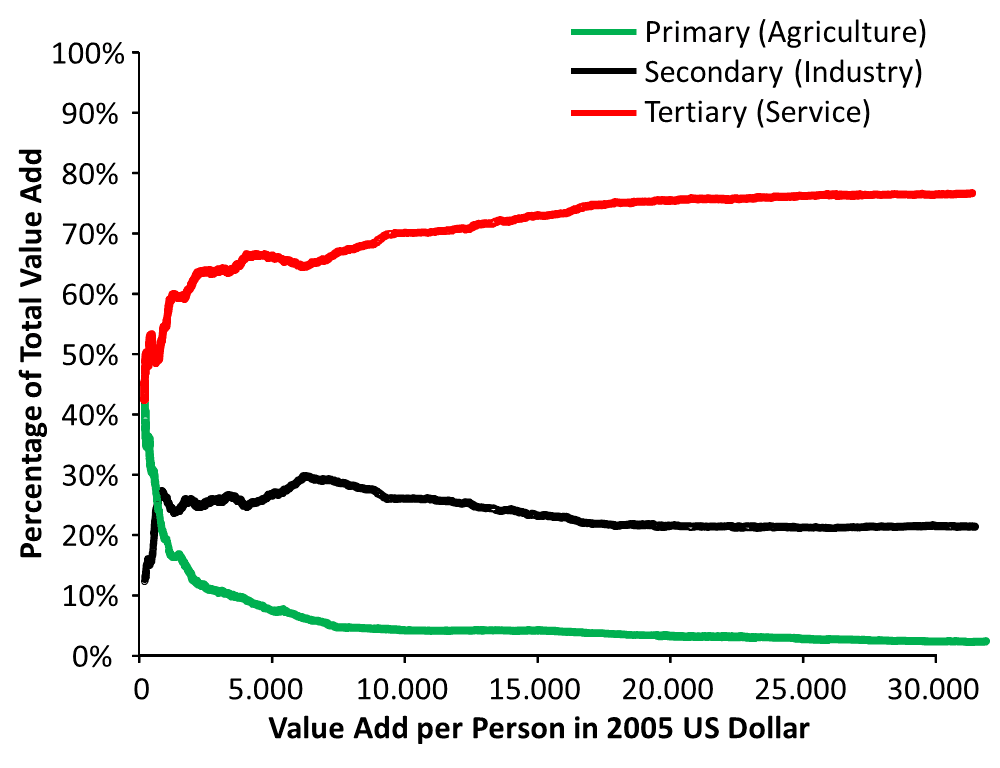 Below are charts for selected countries in different continents. Please note that all charts have the same scale, and the data points show the development between 1970 and 2012. 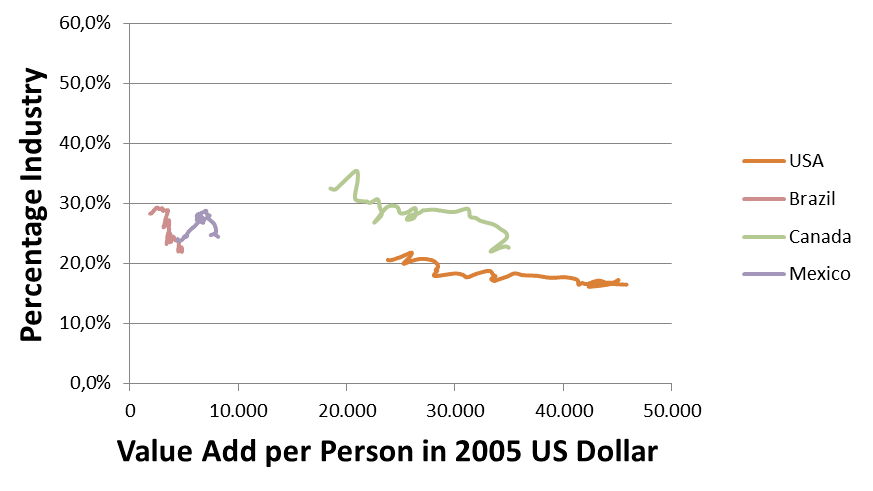 Both the USA and Canada are wealthy first world countries with a value add of $45.000 and $35.000 respectively. The share of industry of the total economy is further declining. Mexico and Brazil on the other hand are developing second world countries. Both have a higher level of industrialization, although Brazil is in a decline. 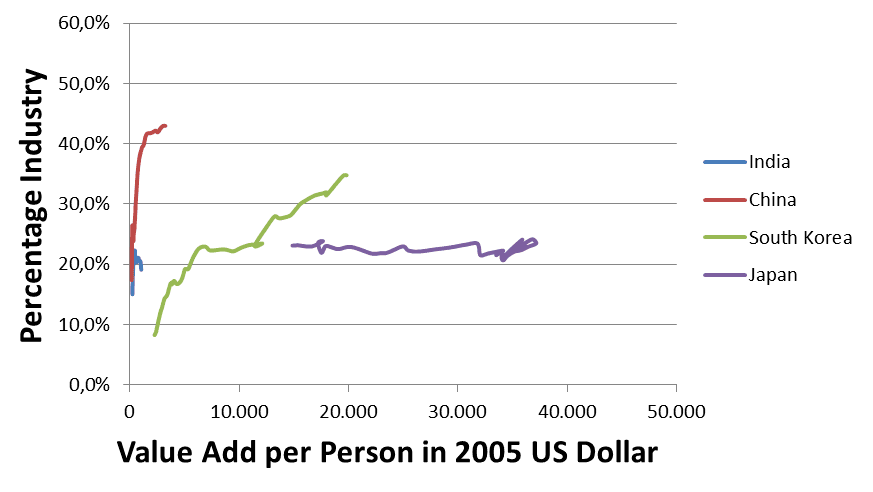 Japan is a highly developed nation in its post-industrial phase. Industry is steady around 22% of total value add, although the burst real estate bubble in 1990 has stopped its advance. South Korea is a strong Asian tiger that is still jumping into becoming a first world country. The trend looks good, and if there is no war in Asia, South Korea may continue to increase its wealth.

China is still on its way, having over 40% of its economy in industry, while the average value add of a Chinese citizen is still barely on the level of Korea forty years ago. India is a mess. Lack of a political strategy has it standing still for the last forty years. 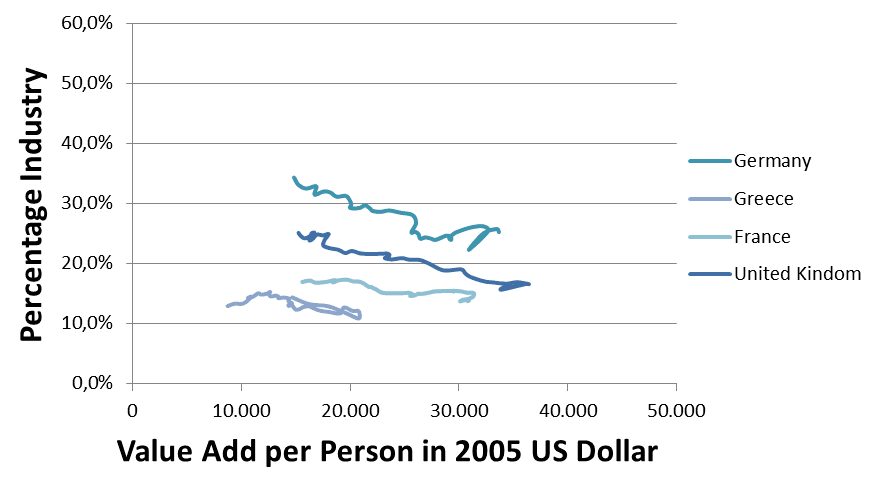 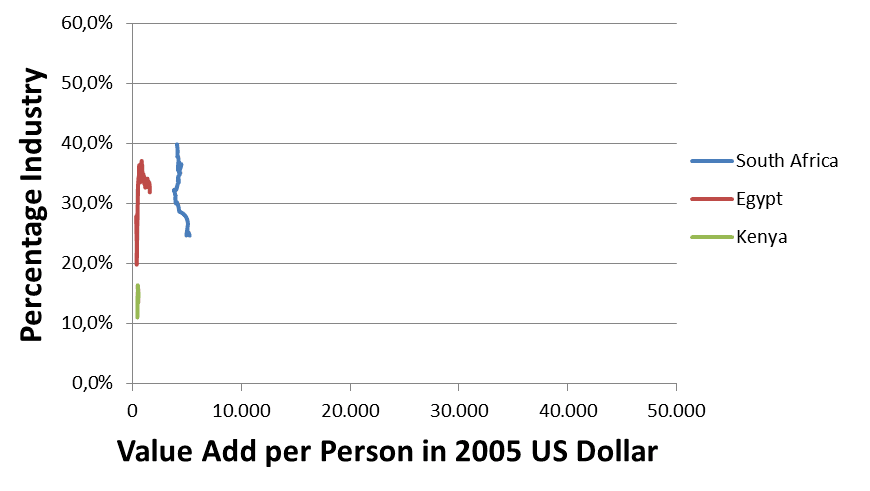 Africa is not anywhere close to North America, Europe, or Asia. South Africa is not getting any wealthier, and its share of industry as part of the economy is declining. Egypt is poor but industrialized, although the recent turmoils reduced the industry basis somewhat. Kenia is still a mostly agricultural country, where industrialization increases only very slowly.

In sum, all countries have to industrialize before they can become a wealthy service based society. As we have seen above, some countries are well industrialized, while others have made significant progress and are well on its way to prosperity. Other countries,  however, seem to be stuck in a agricultural or poor early industrial society with little progress in the last 40 years. I hope this post and its big picture view was interesting to you. Now go out and improve your industry!

Raw Data courtesy of United Nations Statistic Division. The ratio of the Mining, Manufacturing, Utilities (ISIC C-E) to the Total Value Added (not the GDP) represents the Y-axis. The X-axis is the Total Value Added divided by the population of the country for that year. Data for 138 countries between 1970 and 2012 was considered. These countries were:

Additional 84 countries have been excluded from the analysis, based on

The moving average is based on 255 values. This is the average of the percentages, hence the average was not weighted according to the size of the nation.