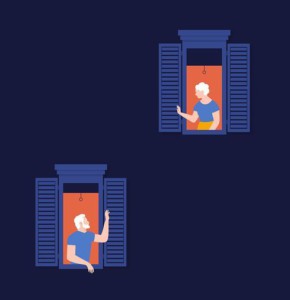 Production lines have fluctuations. Sometimes production takes longer, sometimes shorter, than the average. This makes the line balancing tricky. Besides using a simple buffer between workstations, it is also possible to adjust capacity. Other approaches I have written about include the rabbit chase and the bucket brigade. Here I present a variation of the bucket brigade called “One Up One Down.”

The challenge is that all workers need to be trained at all stations. Especially for longer or more complex lines, this can be tricky and time consuming. Newly hired employees may also need more training time before they can be put on the line.

One Up One Down

Of course, if the next process is already being worked on by another worker, the current worker cannot join but instead moves back to see if he can work on one of the preceding processes. If these are also already occupied, the worker has to wait until the preceding process releases a part for him to work on. It may be possible, however, that the worker, instead of waiting, can assist the other worker. This can be especially true for larger products.

Please note that an overlap is highly recommended. If for some reason the qualifications of the workers do not overlap (like worker #6 below), you will lose the flexibility to handle cycle-time fluctuations. In the example below, worker #6 always has to do two stations. If he is faster than his colleagues, he has to wait. If he is slower, the others have to wait for him. Alternatively, you need a material buffer to decouple these fluctuations. It is doable, but you lose the benefit of the flexibility.

Similarly, if all stations are manned, then you also get no benefit from an overlap in qualification. Since all stations are occupied, a worker can never move a station up or down if there is a waiting time. On the plus side, this system will produce the most parts, since every station is working (almost) all the time. Although, here, too, workers may be able to assist other workers if they have time available.

In any case, for the One Up One Down approach, you will need a few empty workstations (sometimes called “holes”) for the workers to move. The more empty stations you have while still having overlapping qualifications, the better you will be able to adjust to cycle-time variations. At the same time, more empty stations means a lower output since the work content is distributed among fewer workers.

Defined Range Up and Down

You can also train workers in more than just the adjacent station. In the example below, workers #3 and #5 are qualified in four stations. This will give you even more flexibility to adapt to cycle-time fluctuations, but will also require you to spend more time on training.

If you continue this qualification, you eventually will end up with a normal bucket brigade. All workers are qualified in all stations, and can move back and forth freely as required by the cycle-time fluctuations. For more details see my two posts on the The Lean Bucket Brigade Part 1 and Part 2.

Caveat: Make Sure Cycle Is Completed!

There is one thing you need to pay attention to: Each worker must complete a full cycle before moving to another station! The handover of parts or workstations must be only at the end of a cycle for this part or workstation. If you hand over the part halfway, you will have a significant risk of something being forgotten. The first worker can think that the next one will do a sub-task, while the next worker can think the previous one has done it already. In the end you may have parts that miss a sub-step due to a botched handover. Workers often mistakenly believe that this will not happen, but believe me, sooner or later you will have a part missing some work steps. It probably will be easiest to avoid any halfway handovers, and allow handovers only for completed processes with a part or workstation.

Where to Put the Gaps

The approach is often pretty straightforward, but sub-par assignments may still lose flexibility. As mentioned above, you need some holes to allow workers to fluctuate between stations, and an overlap of the qualifications of adjacent workers. If possible, try to distribute these overlaps across the production line. If the overlaps are clustered together or if the workers are clustered together, you again lose some flexibility. In the example below, stations #3 and #4 can be worked on by three workers each, whereas the other stations have less qualified workers. At the same time, workers #3 and #4 are often sandwiched between workers #2 and #5, and may not be able to move to adjacent stations very often. In the example below, consider reassigning different overlaps to distribute them more evenly.

This location of the gabs or holes needs to be considered when training workers. It is of no use if the workers are trained in a way that ends up with no worker being qualified for a station, or the qualifications for one worker being far apart, or the gaps being ill-distributed as in the example above.

It also helps if the workstations all have a similar workload (i.e., a similar cycle time). This is called line balancing, and I have written a whole series of posts on line balancing. This way you can also run the system with different numbers of workers. If you need a lot of parts, man the line completely. If you need less, run the line with less workers. At a bare-bone minimum, you can run the line with one person (although in this case this one has to be qualified for all stations). While due to the improved flexibility you do not need a perfectly balanced line, try to avoid larger disparities between cycle times unless you have either calculated or tested it beforehand.

Assume the above example of a line with 6 stations and a work content of 1 minute per station. If all stations are manned, then each station (and each worker) has a takt of 1 minute, and your line will produce one part every minute (For simplicity sake I ignore OEE losses here).  Changing the number of workers usually does not change the work content, hence the takt time (i.e. the output of the line) changes.  If you have only four workers manning the line, each station still has 1 minute of work content on average. With four people doing six minutes worth of work, your takt time just increased to 6/4 = 1.5 minutes. For three workers your takt time changes to 6/3 = 2 minutes. At a bare bone minimum of one worker, your takt changes to 6/1 = 6 minutes.

So, this is it on the One Up One Down approach, a variation of the bucket brigade. I hope this post was interesting for you, and you can use this in your production system. Now, go out, balance your line, manage your fluctuations, increase your flexibility, and organize your industry!

P.S.: This blog post is based on a suggestion by, and with input from, Richard Rahn from Leonardo Group Americas. Many thanks, Richard!