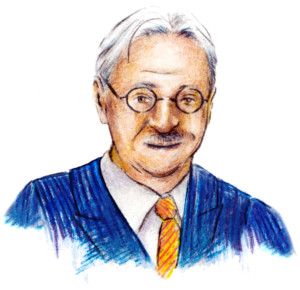 Albert Kahn (1869–1942) is an often unknown but very influential figure in the history of manufacturing. An architect by trade, he revolutionized industrial architecture, and is often nicknamed the “Architect of Detroit.” Most modern factories have a design that goes back to his innovations. Since he was born exactly 150 years ago on March 21, 1869, it is a good time to look at his achievements.

Albert was born in Rhaunen in Prussia (now Germany) on March 21, 1869. His father Joseph was a rabbi, and the family moved to Detroit in 1880 when he was eleven. He wanted to become an artist, but it turned out that he was color blind.

As a teenager he worked for a local architect as an office boy, initially without pay (modern architect students may still be familiar with this work without payments, unfortunately). However, one of the architects started to mentor him, and in 1891 Kahn won a one-year scholarship to travel Europe, during which he visited with another architect, Henry Bacon, who later designed the Lincoln Memorial.

Although he never formally graduated from an architecture school, he opened his own architecture firm in 1895 at the age of twenty-six. While first working with two partners George W. Nettleton, and Alexander B. Trowbridge, he became the sole owner in 1905. He renamed his firm Albert Kahn Associates, which is still active. (I asked the firm for permission to use some more recent photos of Kahn, but got no reply 🙁 ) 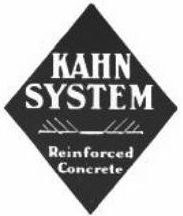 While reinforced concrete has been in use since 1850, the technique was flawed, and beams occasionally broke. Albert’s younger brother Julius Kahn (1874–1942), who also worked at his architecture firm, developed a new approach to reinforced concrete that produced much more reliable concrete trusses. Julius eventually started his own firm, the Trussed Concrete Steel Company, in 1903.

Let There Be Light …

While Julius improved the technical details, Albert used the new opportunities to create a new approach to industrial architecture. Previously, industrial buildings were shaped by the needs of steam and water power. A central power plant supplied the entire building with power through rotating shafts. Longer shafts meant more friction and also more vibration, and hence the building was built as close to or even around the power source, often using multiple floors to reduce the length of these wooden shafts. 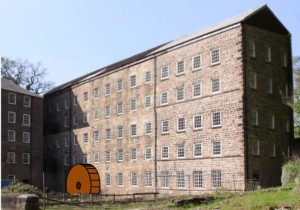 This can be seen here in this (photoshopped) image of one of the earliest cotton mills, the Cromford Mill by Richard Arkwright. The mill was five floors high, with a waterwheel in the center. The current mill is only three floors, since the upper floors burned down. Luckily, Photoshop can fix this for you (clumsily). Notice how all the floor space is clustered around the water wheel?

Also notice how they tried to add as many windows as possible, but due to the brick-and-mortar construction could only use 20%–25% of the wall space for windows? This was at a time when electric light didn’t exist, and gas lights were quite dangerous in a cotton factory. Hence they tried to maximize the natural light, albeit limited by the brick construction.

Using modern reinforced concrete, Albert Kahn was able to break through these constraints. The first building where he used this technique was the Packard Motor Company No 10. Plant, designed in 1903 and completed in 1910. Notice how much larger the windows are?

Nowadays we are used to large windows. But back then having such large windows was revolutionary. Now 70%–80% of the walls could be windows. An additional bonus was that the construction was highly fire resistant, compared to the conventional structures using wood.

This also impressed others, and Henry Ford hired Albert Kahn to build his Highland Park plant between 1908 and 1910. Due to these large windows, this building was nicknamed “Crystal Palace.”

Please note that while this was revolutionary in the USA, I do know of at least one contemporary building in Germany that also has extremely large windows. While Kahn was building the Packard plant, the famous Steiff toy factory also built a new factory hall between 1904 and 1908.

They used a curtain wall construction where a glass facade hangs in front of the supporting pillars. This allowed even more windows. Since the workforce consisted mostly of unmarried women, this building was quickly named “Aquarium of Virgins” by the locals.

In any case, the German architect is not recorded in history, but Albert Kahn is well known for his achievement. Soon all over the world people used reinforced steel to build factories with large windows.

Let There Be Space

Due to the success of the Highland Park plant, Henry Ford hired Albert Kahn again for the largest factory in the world: the Ford River Rouge Complex, built between 1917 and 1928. Here Albert Kahn shed another historic baggage of industrial architecture and created single-floor steel-support buildings. Now it was possible to have a wide floor space and wide space between supports, and the windows for light and ventilating were simply built into the roof, giving the factory its now iconic sawtooth shape. This shape is to us immediately recognizable as a factory building. 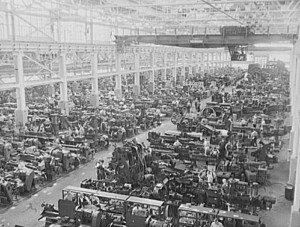 Inside there is usually no wall, and only a few pillars to support the roof. The space between the walls is much larger than in previous buildings, since you no longer had to be close to a wall with a window for air and light. Hence you have much more flexibility in placing your machines, paths, storage, and any other layout related issues. Larger products like aircraft could not even be produced without such a wide span between supports.

Overall, Kahn built over one thousand industrial buildings for Henry Ford, and hundreds more for other companies all over the world. On top of that, there were hundreds more non-industry buildings. He also built numerous military installations during World War II. His firm employed up to six hundred people, which is gigantic for an architecture firm. He built 19% of all industrial buildings in 1937, and in 1941 he received the eighth-highest salary in the US: $486,936. Not bad for a poor immigrant!

He said that he wanted most to be remembered for his work on the William L. Clements Library at the University of Michigan in Ann Arbor. He died aged seventy-three on December 8, 1942 in Detroit.

If you go to your shop floor, it is quite possible that the basic design was influenced by Albert Kahn. In any case, I hope this little excursion in history was interesting to you. Now, go out, use the space Kahn gave you, improve your layout, and organize your industry!

4 thoughts on “150 Years after the Birth of Albert Kahn”