Today 230 years ago on July 8, 1785, Honoré Blanc demonstrated the first large scale interchangeability of complex mechanical parts in the courtyard of the Château de Vincennes by disassembling musket locks, mixing the parts, and assembling them again. While it took another 150 years for the idea to take hold firmly in industry, it all started here with 50 muskets. Time for a look back in history.

The Benefit of Interchangeable Parts

The interchangeability of parts is nowadays taken for granted. If, for example, you buy a M10 bolt in America, fly to China, and buy a M10 nut, they will fit.

Imagine for a second if they would not fit. Imagine not having worldwide standards for screws. Or even a standard within your own company. While for Screws different standards exist, most of the world nowadays uses the metric screw standard.

In your assembly line, you expect that each part delivered to the line fits into any of the products. For most of history, however, this was not true. Even around 1900, the most important tool in assembly of metal parts was a file. Almost every part that was delivered to the assembly line needed to be filed down in some place to make it fit.

Now consider modern automotive manufacturing. Imagine the unlikely case that a piston would not fit in the cylinder. 😯  Imagine that person having a file available on the assembly line. 😯  Now imagine someone filing the piston down to make them fit. 😯 😯 😯

I am pretty sure most of the employees of that company – including the CEO – would know that piston maker’s name … or more likely remember his name, since he would probably never again set foot in that company. Yet that was the standard up to 100 years ago.

The idea and the benefit of interchangeability was realized long before Honoré Blanc. However, often these were either very loose tolerances, very simple parts, or expensive samples. For example, already in the Arsenal of Venice, wooden parts for ships as, for example, benches, were pre-cut, so they could be assembled with only minor adjustments.

Swedish inventor Christopher Polhem reportedly achieved interchangeability in his workshop for clocks in 1720, but it definitely did not spread beyond his workshops.

For metal parts with tighter tolerances, interchangeability was created only for very simple parts. A pioneer here was Lieutenant General Jean-Baptiste Gribeauval (1715–1789). French artillery and artillery carriages were already standardized to five classes of cannons: 4, 8, 12, 16, and 24 pounders. More for aesthetics than technical reason, Gribeauval continued this standardization. By 1780 this quest for aesthetic uniformity had a surprise side effect – wooden parts for the carriages no longer had to be fitted, but were interchangeable.

Gribeauval also pushed for standards in the manufacture of the cannons themselves. Go gauges to ensure that a cannon ball fits in the barrel have been used since medieval times. 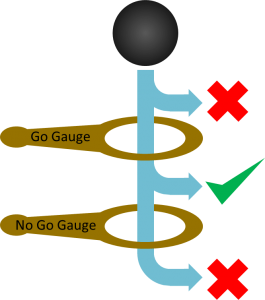 Using a similar system for the cannons, Gribeauval was able to have both standard caliber balls and cannons, resulting in probably the most advanced artillery of its time. Nevertheless, round holes and round balls are very simple geometries, and hence easy to check.

Musket locks, however, have a much more tricky geometry. Especially a small piece inside the lock called the tumbler (necessary to fire the gun) had a complex shape and tight tolerances. The first one to demonstrate interchangeability for musket locks was Guillaume Deschamps in 1723. However, his locks were ridiculously expensive, and for one of his interchangeable locks you could buy seven normal ones. Hence he only produced a few hundred guns in total.

Honoré Blanc  (1736–1801) was a French gunsmith, and from 1763, he was in charge of quality control for the French Army. The French Army tried to lower costs and to increase quality by putting pressure on French gunsmiths. The gunsmiths, in turn, preferred not to work for such a troublesome customer and rather supplied weapons to the American Revolution soldiers for a higher profit and less fuzz.

An attempt by the army to force gunsmiths to sell their product to them was unsuccessful, and the army was in serious danger of running out of weapons. Out of this problem, the idea was born to take control of the value chain by introducing interchangeable parts.

Yup, it had nothing to do with ease of assembly, or the possibility of in-field repairs while under combat, but only with replacing annoying headstrong craftsmen with more docile unskilled labor.

Honoré Blanc developed a multitude of tools and gauges to ensure accuracy, hardened the parts slowly in horse manure to avoid warping, and eventually succeeded. Today 230 years ago on July 8, 1785 in Château de Vincennes, he disassembled 50 locks, picked pieces for 25 locks at random, and – to the amazement of the assembled officials and representatives – assembled them again.

Duly impressed, the French government had him set up a workshop. Since Le Blanc was now rather unpopular with his fellow gunsmiths, this workshop was located (for protection) in the dungeons of the Château de Vincennes where he also held his demonstration. This dungeon was previously a prison with such famous prisoners as Diderot, de Mirabeau, Jean Henri Latude, and the infamous Marquis de Sade.

Nevertheless, even the strong walls of Château de Vincennes did not protect his workshop from the French Revolution, and his workshop was destroyed. Even worse, his supporter Gribeauval died in 1789. Determined to continue, Le Blanc set up his own workshop and produced large quantities of interchangeable gun locks at only 10% additional cost before he died in 1801.

By coincidence, however, a new US ambassador to France Thomas Jefferson (better known nowadays as the third president of the USA) was able to witness the demonstration by Le Blanc in 1785. Jefferson brought the idea and samples back to the USA, and promoted interchangeability there.

Eventually, the young nation established two armories, one in Springfield, Massachusetts, and one in Harpers Ferry, West Virginia. One of their goals, besides having a reliable supply of weapons, was to establish interchangeability of parts.

The two armories differed enormously. While Springfield pushed for organization and structure, Harpers Ferry was a hotbed of corruption and waste. Yet, it was in Harpers Ferry that the US produced their first interchangeable locks. Gunmaker, inventor, and proponent of interchangeability John Hancock Hall (1781–1841) was sent to Harpers Ferry to set up a workshop, independent from the rest of the armory. Hence, Hall not only had to solve the myriad of technical details of interchangeability, but also fight against the Harpers Ferry superintendent, who tried to hinder and hamper this outsider whenever he could. Hall had constant problems getting men, material, machines, or even a workshop large enough to set them all up.

Hall realized that interchangeability was all about precision. While conventional gun lock parts had a precision of ±0.2 mm, he needed ±0.02 mm for interchangeability. He achieved this interchangeability with the help of gauges, using a total of 63 gauges to verify the tolerances of the components of a lock. He also invented new measurement techniques, and created new and sturdier machines to reduce vibration. He also improved the new technology of milling. By 1824 the parts for his locks were completely interchangeable.

The next step was interchangeability across different workshops. This he achieved together with fellow gunsmith Simeon North (whose 250th anniversary of his birth, July 13, 1765, is coming up in five days). It took some time, but by 1834 North’s and Hall’s lock parts were completely interchangeable. Eventually, Springfield Armory also achieved interchangeability, but only in 1849.

By the way, you may have heard about interchangeability being invented by Eli Whitney (1765–1825). However, he was much better with words than with metal. Constantly promising to deliver 10,000 guns, he eventually “demonstrated” interchangeability to President John Adams and Vice President Thomas Jefferson in 1801.

However, in this presentation of “interchangeability,” he was very careful not to disassemble the complex locks. Instead, he only took the locks out of the wooden gun stock and placed them in another wooden gun stock. With no moving parts, this had a much looser tolerance. Additionally, Whitney used only ten carefully selected gun stocks that had been specially adjusted to fit all ten locks. Detailed analysis of existing Whitney muskets definitely prove that there was no interchangeability of the locks themselves.Hence, the entire demonstration was staged and Whitney “duped government authorities” (Smith, M.R 1980) about his lack of interchangeability.

He also was 10 years late in delivering his 10,000 guns. And, while I am at it, he did not invent the milling machine either. He did invent a small improvement to the cotton gin, although even this is contested (see below for a selection of my sources).

In any case, the idea of interchangeability was now firmly set in American gun manufacturing. Additionally, hundreds of machinists and technicians working for the armories eventually moved to other industries and brought their knowledge with them. Many of the new complex products benefited from the experience of the armories, including typewriters, sewing machines, bicycles, and eventually the automobile.

However, even then it took time. For example, famous sewing machine maker Singer did not achieve interchangeability until around 1900. Similarly, as late as 1900 most automobile parts were still not interchangeable.

A famous demonstration was with three Cadillac Model K’s in 1907. These new vehicles were tested on a racetrack and then completely disassembled. The many high-precision parts were then mixed, and three vehicles were assembled again. They not only successfully completed another 500-mile test, but one of the vehicles even won a subsequent 2000-mile reliability test. What nowadays would be standard in interchangeability was in 1907 an outstanding achievement.

Hence, the idea of interchangeability that we take for granted nowadays was a long and winding road. Many inventors and supporters were needed to establish the idea and to bring it into the market. Most of them were idealists, and Le Blanc, Hall, and North all died poor or without significant wealth. Nevertheless, without their contributions, our modern world would look quite different. Hence, remember them when you go out and organize your industry!

PS: If you would like to read more about the history of manufacturing, then check out my book:

Some still see Eli Whitney as an US icon, but research shows that his status is sometimes quite overrated. Since this may be a controversial statement for some, here are some selected sources on Whitney:

13 thoughts on “230 Years of Interchangeable Parts – A Brief History”